SAN FRANCISCO (CBS SF) -- Over the course of the past decade and a half plus, Portland, OR-based quartet Red Fang has established itself to be one of the most talented, hardest-working bands in heavy rock. Since first coming into wider recognition with the release of their eponymous Sergeant House Records debut in 2009 -- and the viral Dungeons-and-Dragons inspired video for "Prehistoric Dog" that featured the beer-shotgunning band clad in 12-pack armor battling wizards (it's been viewed over 6.5 million times on YouTube) -- Red Fang has earned a sizable international fan base with its relentless touring schedule.

The band's subsequent albums -- 2011's Murder the Mountains, their first for noted metal imprint Relapse Records, and the follow-up effort Whales and Leeches in 2013 -- further solidified the quartet's reputation, though their continued partnership with "Prehistoric Dog" video director Whitey McConnaughy on a run of hilarious clips didn't hurt. The recordings showed the band refining their compelling mix of sledgehammer riffs and hook-laden tag-team vocals of bassist Aaron Beam and guitarist Bryan Giles (second guitarist David Sullivan and drummer John Sherman round out the band).

In 2015, the group convened to record outside of Portland for the first time, traveling to Ventura in Southern California to work with renowned producer Ross Robinson -- who has helped track albums for everyone from Korn, Limp Bizkit and Slipknot to At The Drive In, Sepultura and the Cure. The resulting album Only Ghosts came out the following year and found Red Fang pushing it's sound in experimental new directions while still pounding out the band's signature blend of heavy riffs and indelible melodies.

Red Fang maintained their relentless touring schedule in the years that followed, as well as putting out occasional new songs -- including a brilliant cover of Gary Numan's Tubeway Army-era  classic "Listen to the Sirens" as a digital single in 2018 that showed off yet another side to the band.

The quartet was preparing to finally announce its long-awaited fifth album and accompanying tours last spring when the coronavirus pandemic put the group on an involuntary hiatus. Instead of crossing their fingers and hoping the album would sell well without shows promoting the release, Red Fang decided to hold off, waiting to announce Arrows until April after the success of the COVID vaccine made a safe return to the road a more likely reality.

Pushing the band's sound into some previously unexplored territory, Arrows throws some sonic curve balls into the mix with the quartet's usual combination corrosive ragers, pummeling, melodic stoner anthems and dark dirges. The album also saw Red Fang reuniting with producer and fellow Portland music scene mainstay Chris Funk, a member of indie rock outfit the Decemberists who has recorded Stephen Malkmus and the Jicks and Langhorne Slim among others.

In Part II of a recent CBS SF interview with Red Fang drummer John Sherman, he talks about working with Funk and some of the details behind the songs from the new album set for release on Relapse Records on June 4. The band has also announced plans for its first full post-pandemic tour in the fall that looks to bring them back to the Bay Area in October.

CBS SF: There's one song that I thought sounded like it might have just been an atmospheric bit that you heard it and said, "Why don't I just stick a drum beat on top of this?" It's "Interop-Mod," which is almost like an interstitial bit between full songs...

John Sherman: Yeah, that's exactly what that is. Just exactly what you said; like some atmospheric s--t that I just put a beat on. It doesn't have to be a song, it just sounds cool. It's going to be a segue from one song to another song. Just extra cool sounds. It doesn't necessarily have to have a verse and a chorus to land on a record.

CBS SF: I wanted to talk like a little more about Chris Funk and the ideas he brings to the table. I remember one of the times I talked to Brian, we discussed "Wires" at length. My recollection is him saying that the final version actually kind of surprised him as far as the added instrumentation and how orchestrated the song got to be. I was kind of curious to what extent he runs his ideas by you beforehand. Does he sort of test stuff out where he'll approximate a string section using synths to demonstrate? Or does he take the basic tracks and go hog wild?

John Sherman: Oh no, definitely everything is run by us, for sure. and most of the stuff, especially with "Wires," we knew about. I don't know what Brian meant. Maybe just that when he finally heard the final mix that it sounded, you know, bigger than it did in our practice space. It's not like Chris took that song home and did a bunch of stuff to it without us knowing.

But the string section on this record, I knew it was going to happen, but I wasn't there for it [the recording] and that was a surprise. Maybe not a surprise; I knew I was going to be there. But when I heard the rough mix, I thought, "Whoa, that's crazy!" Most of the time, if Chris is adding anything, it's with us in the studio. You know, he'll say something like, "Hey, what about if we put a keyboard on this part?" And someone will say, "Yeah, that sounds cool." And there's some cool keyboards at the studio. I think Aaron played a bunch of keyboard on this record.

But a lot of it -- especially with Murder the Mountains and even more so on Whales and Leeches -- a lot of the crazy sounds really came out with Vance Powell mixing those two records. I mean, the sounds are there. We put a bunch of sound on tape for him to work with. But he really likes the crazy sounds and brought those to the forefront more than a lot of just straight up heavy records.

CBS SF: I know that Arrows was written and recorded long before the pandemic started, but there are a couple of things that seem weirdly prescient. Like the lyrics from "Why" for instance: "Dim the lights and find the cure/ Place the mask on nose and chin." The first time I heard that, I was just like, "Wait a minute!" How did that happen?

CBS SF: It speaks directly to our recent experience, for sure. And "Days Collide" seems in some ways like a dirge about the whole lockdown. So any thoughts on the band's collective psychic abilities?

John Sherman: It seems like Bryan often writes about doom and gloom, or impending doom and gloom. So all that energy just finally manifested in a global pandemic. So you can thank Bryan for that [laughs]. You know, that's kind of one of the reasons why we like to have goofy videos and just have fun is because our lyrics -- especially what Bryan writes -- are usually pretty dark and not super fun.

But playing in a band is fun, playing shows is fun. When we hang out, we are laughing all the time and not talking about doom and gloom. I think that his way of of getting that s--t out is through song. So there it is on the albums, but in general, we're goofy dudes and we kind of offset that with our our videos.

CBS SF: Speaking of the videos, it was great to see another collaboration with director Whitey McConaughey. Is he coming up with the video concepts? And how fun was it to trash stuff in the clip?

John Sherman: Oh man, it's the best. On this, I have to give Whitey credit. It's his idea and it's kind of the opposite of us having the idea and working it out with him. It's like he'll have the idea and bring it to us, and then we'll we'll flesh it out with him. But it was definitely from the brain of Whitey McConaughey.

It's never really scripted or anything, though. It's just kind of like he'll set it up and say, "This is what I'm thinking. Something like this happens..." And then we'll say, "Oh yeah. and maybe I could say this or do this and blah, blah, blah." And so it comes together that way.

But the idea was definitely his. He thought it would be funny -- and we agreed -- to basically cover the "Wires" video. Like do a remix, if you will, of the "Wires" video. There's a nod to that at the beginning, for sure. We film the opening scene in Whitey's new house and we wanted to make it look like the old house that we filmed the "Wires" video in.

So we put wood paneling on the walls and tried to arrange it just like the old house. And it looks pretty close. And I think there's a line like, "Haven't we done this before?" And it's funny, I've heard some people say, "This video is so different from anything you've ever done!" I'm like, "What are you talking about? Are you sure?" But I guess those people have never seen the "Wires" video. And as far as smashing s--t and cutting s--t up with a sword? I mean, come on. What's better than that? No matter how old you get, the funnest thing to do is smash s--t.

CBS SF: I am sure that as active as the band has always been touring, you must be anxious to get back on the road. One thing I saw that was announced already is a Halloween show in Nashville at the Ryman Auditorium. I know that it was the home of the Grand Ole Opry for years, but didn't realized they did heavy shows there...

John Sherman: I don't know. I've never been there. We got offered that Halloween show there with All Them Witches, who are locals. So maybe because it's them and it's Halloween? That is the first show that we've announced, and another one just got announced today. We're playing Louder than Life, I think it's called. It's a festival in Louisville in September with Metallica and Judas Priest and a bunch of bands I've never heard of and us in very small print. But we have more shows coming. They're just not announced yet.

Since this interview, Red Fang announced the band's first full U.S. tour since the pandemic starting in the fall with support from Starcrawler, Here Lies Man and Warish (see dates below). The band is also appearing at Psycho Las Vegas on August 21. Arrows comes out on Relapse Records on June 4. 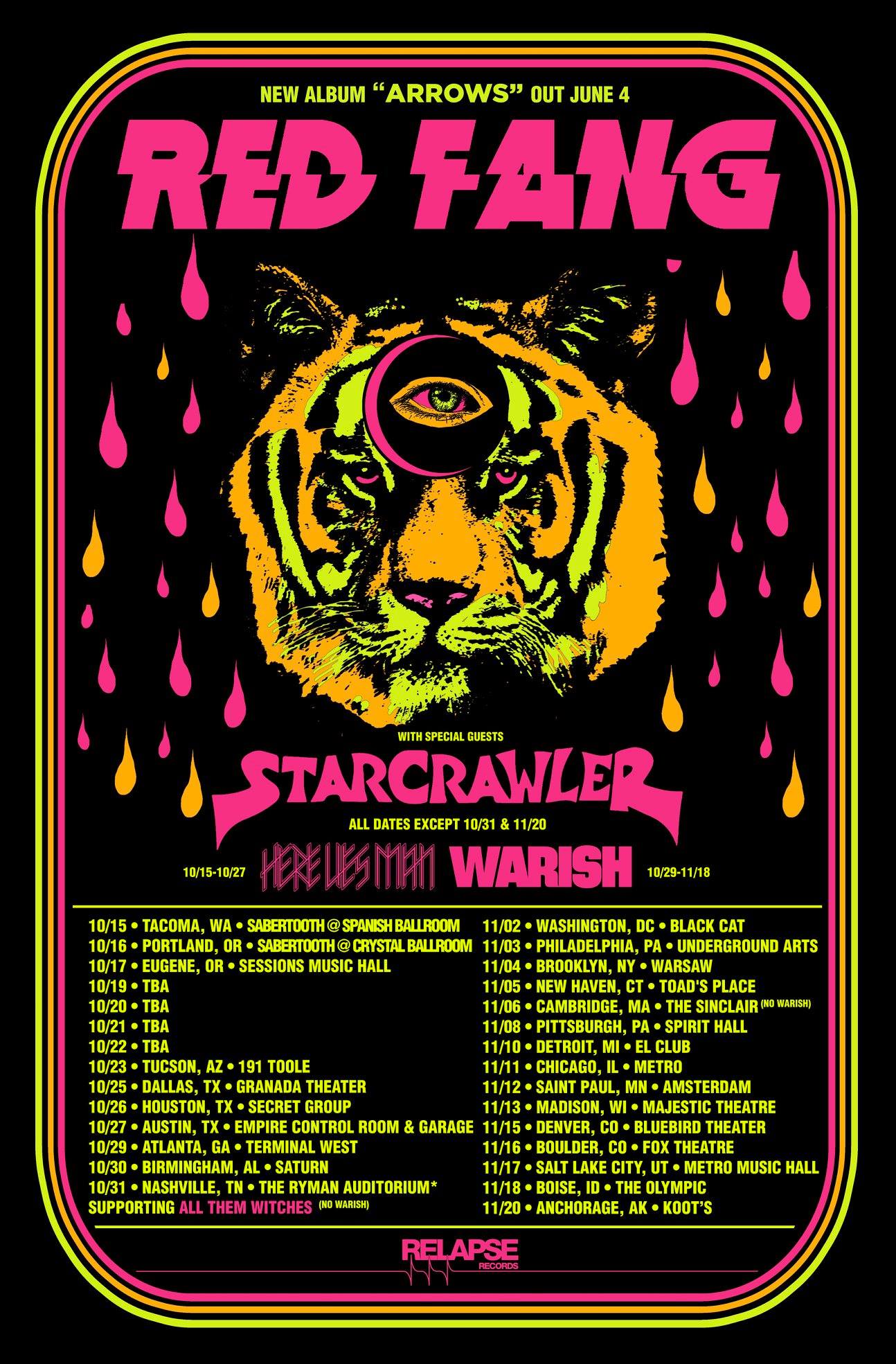