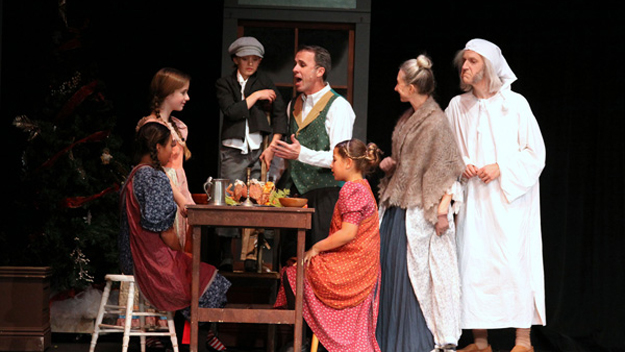 Schools and community groups are having fun in quality theater production companies dotted around the North Bay. We look at some of the past years' highlights to find the best musicals featuring local talent on the calendar right into 2015. For those who feel more comfortable in the audience than singing onstage, visit these box offices well in advance, as sell-outs are commonplace.

For the fifth consecutive year, "A Christmas Carol" lights up the stage for family audiences, performed by Marin County's largest non-profit performing arts organization. In Charles Dickens' most beloved holiday story, we watch Ebenezer Scrooge face his selfish ways in a local production that "gets the full Broadway treatment in this delightful musical."

Especially for kids, ages four and up, this musical is a 90-minute production with a 15-minute intermission. Based on the popular children's book by Roald Dahl, the new musical is a classic tale about the orphaned boy who escapes from his wicked aunts aboard an enormous enchanted peach inhabited by a bevy of very big bugs. Following last year's inaugural success, additional Bay Area Children's Theatre Productions are in the lineup, with package tickets available.

In its 42nd season, the company performs in a charming vintage schoolhouse seating 99 on the outskirts of Petaluma. The world premiere of this Piaf cabaret revisits her hypnotic, enchanting songs of the 1930s. Cinnabar promises four superb performers and a five-piece band to take the audience on this visit through the streets of Paris. Cinnabar provides a full season of training and performances in professional opera, drama and musicals, as well as a community chorus.

This musical adaptation of the movie roles made famous by Faye Dunaway and Warren Beatty in the 1967 film about Dallas-based gangsters Bonnie Elizabeth Parker and Clyde Chestnut Barrow is the true story of a Depression-era American couple whose two-year crime spree ended in a blaze of gunfire. This production is a partnership between Santa Rosa Players and Actors Theatre stage productions at the historic, renovated Del Monte Cannery.

Good for all ages, the surefire Broadway hit musical show about a turn-of-the-century matchmaker raises the roof with some musical numbers. The Raven Players have a lot of fun and look to share it with audiences as they "build a resident, self-sustaining community theater company that is known for producing consistently high quality theater and that identifies Healdsburg and Windsor as destinations for great community theater."

The Gilbert and Sullivan comedic opera has been a family favorite for generations. Ross Valley Players offers talk-back sessions after the performances on July 26 and August 9. Formed in 1930, this company is the oldest continually operating community theater group on the West Coast, currently producing six productions covering 30 weeks a year. Their venue is a cozy barn on the grounds of The Marin Art and Garden Center.

Related: How To Get Involved In San Francisco's Theater Community
Laurie Jo Miller Farr loves walkable cities. A tourism industry professional and transplanted New Yorker by way of half-a-lifetime in London, she's writing about the best of the bay and beyond for Yahoo, USA Today, eHow, and on Examiner.com.