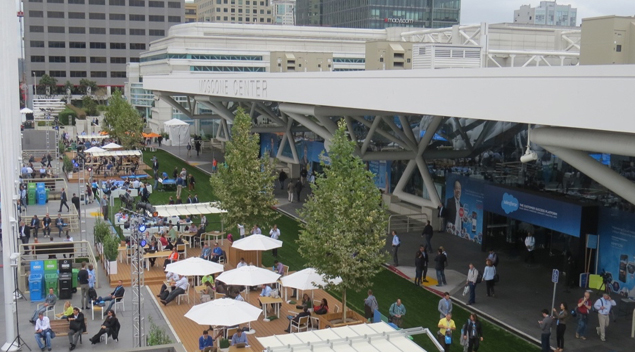 The fall convention season is in full swing, with Oracle OpenWorld 2015 currently being held in San Francisco for what's expected to be the year's largest convention in the Bay Area. Still, although OpenWorld will conclude in a matter of days and Dreamforce 2015, the complementing Bay Area mega-event, had another very successful run last month, there are several other outstanding conventions slated to begin in the upcoming weeks. From state-of-the-art automobiles to comic books and video games, here is a brief look at are five of the best upcoming conventions in the Bay Area.

Thousands of auto enthusiasts will descend upon Moscone Center for the 58th Annual San Francisco International Car Show showcasing the latest consumer and concept vehicles from around the world. Held at San Francisco's largest convention center over eight days, including a full slate on Thanksgiving, the event is the largest of any kind in Northern California and the second largest on the West Coast. In addition to the 2016 model cars, SUVs, trucks and vans that will be on display, the international auto show will also feature exotic sports cars, electric, hybrid and alternative fuels vehicles and rare treasures from the Academy of Art University Classic Car Collection. Last year, many favorite Bay Area public figures appeared at the show, including the San Francisco 49ers mascot Sourdough Sam and the Gold Rush Girls, members of the Oakland Raiderettes, Sharkie from the San Jose Sharks and San Francisco Giants' mascot Lou Seal, along with the Giants' three World Series Championship trophies.

Just months after the very successful Wizard World Comic Con in San Jose, the first ever Campbell Con will be held just a few miles south in downtown Campbell. Although a smaller South Bay event than the higher profile show at the San Jose Convention Center, attendance at Campbell Con is expected to be substantial for what should be a lively one-day pop culture convention. Several celebrity guests are already confirmed for Campbell Con, including famed comic book artists like Omar Morales and Joe Rubinstein, voice actors like Angelique Perrin and Georgie Kidder and guest of honor Chris Marrinan. The family-friendly pop-culture convention will also feature comic book vendors, cosplay, collectibles , games, toys and more. Other very special guests scheduled to appear are Jon Provost, best known for his role as "Timmy" in the classic television series "Lassie" and Kathy Garver, whose voice credits include "The Ten Commandments", "Family Affair" and "The Bing Crosby Show."

After a successful run at the Javits Center in June, the world's largest cloud computing event is returning to Silicon Valley and is expected to draw a huge crowd of industry experts and analysts. Attendees will be able to choose from a wide selection of sessions, including leading cloud technology experts covering topics like big data, microservices and DevOps, in addition to meeting with vendors and others experts the field. Among the scheduled speakers to appear are Chris Van Tuin, chief technologist for the Western U.S. at Red Hat, Umesh Kanade, general manager of tech solutions at Harbinger Systems and and Mikey Cohen, manager edge gateway at Neflix. Among the vendors who will be on hand to talk about their services are DataClear, Micron Technology and Softlayer. The Santa Clara Convention Center is located not far from Levi Stadium, but parking shouldn't be an issue since the 49ers will be on the road that weekend. Over the past few years, the cloud computing industry has exploded in popularity and is close to becoming a $200 billion market this year.

Billed as the America's largest event for wearables, IDTechEx Wearable USA is expected to draw a substantial number of industry professionals from Silicon Valley and from around the world. The event will feature several exhibitors, several guest speakers and an awards presentation to recognize the best new wearable technology device and best new material or component development. Among the industry experts slated to appear as guest speakers are Francois Jeanneau, CEO of Novasentis, James W. Stasiak, senior technologist of HP, Achintya Bhowmik, vice president and general manager of Perceptual Computing with of Intel, Raghu Das, CEO of IDTEchEx and Peter Harrop, chairman of IDTEchEx . At the same location and dates, IDTechEx will host several other events, including Printed Electronics USA, Electric Vehicles, Internet of Things Applications USA and 3D Printing.

Launched in 2012, GX3 is billed as the "gaming convention for everyone." Featuring a variety of special events, the annual convention was founded by Matt Conn via Kickstarter GX3, otherwise known as GaymerX, and is the first ever LGBTQ-focused gaming convention, with a focus on games and culture, such as video games, tabletop games and card games. Although the event is described as a "queer space" with panel sessions revolving around LGBTQ issues and gaming development, it's intended for everyone. GayMerX3 will have multiple guest speakers, including N.Y.-based rap artist Sammus, Gil Almogi, contributing editor for Game Revolution, psychologist and longtime gamer Joey Hannah and Matt Conn, CEO of Midboss.com. GX3's Bosses of Honor features several individuals from the gaming and entertainment industry, such as Jennifer Hale, Trixie Mattel, Dr. Kortney Ryan Ziegler and award-winning actor John Patrick Lowrie. This year's convention kicks off the night before it officially opens, with a VIP party featuring the funk-jazz-soul band Super Soul Brothers. GX3 will be held at two San Jose venues — the San Jose Convention Center and the neighboring San Jose Marriott Hotel. Another event highlight that's expected to draw a sizable crowd will be the GX3 Cosplay Pageant on the final day.