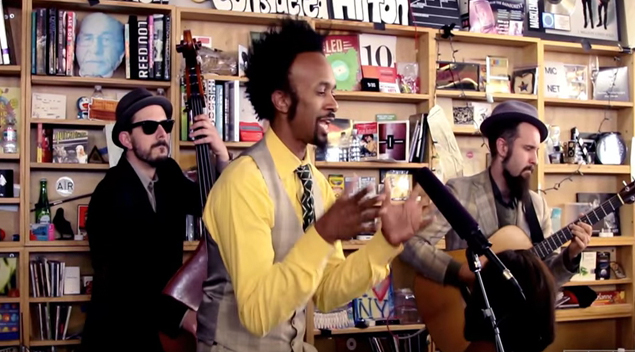 It was another phenomenal year for the San Francisco Bay Area music scene, with many local bands receiving rave reviews and gaining larger audiences via social media. With a world-class reputation for cultivating emerging talent since the days when legendary bands like the Grateful Dead and Jefferson Airplane first hit the music scene, the Bay Area witnessed breakout years for some local bands who seem destined for much broader success and perhaps even stardom. Here are five of the best up-and-coming Bay Area bands to check out in 2016.

Oakland-based Xavier Dphrepaulez, who goes by the stage name Fantastic Negrito, had a phenomenal albeit controversial breakout year in 2015. Despite having his show canceled at the Bay Area's largest music festival due to a staff intern's attempt to scalp a festival pass, Dphrepaulez and his band are still riding high after winning NPR's Tiny Desk Concert Contest last March while beating out nearly 7,000 other entries in the process. His black roots style of music was further praised after a scintillating performance at SXSW, and he was described as one of the most talked about performers at the annual music and arts show in Austin. Fantastic Negrito's rising popularity was actually a comeback of sorts, as the Somali-American first gained attention from Prince's manager and later record producer Jimmy Iovine, the co-founder of Beats Electronics with Dr. Dre. Check out Fantastic Negrito's award-winning performance on NPR, along with other phenomenal cuts like "It's A Long Long Road," "Night Has Turned To Day" and "An Honest Man," the theme song for Amazon's original series "Hand of God."

San Francisco-based indie group Foxtails Brigade has already been together for a few years and released four albums with another due in March. But 2015 was an exceptional year, winning three film festival awards to date for "Far Away and Long Ago," including Best Music Video from the Atlanta Underground Film Festival. Released last July, the hauntingly beautiful video showcases the band's lead vocalist Laura Weinbach, who sings about a medieval setting with "castles high and low" and "things of beauty to behold." Weinbach, whose bio describes her as the "Hollywood Hills-born daughter of a horror filmmaker and sister of a cult comedian" co-leads the Baroque-rock tinged band along with violinist-composer Anton Patzner, a former member of the indie rock bands Bright Eyes and Judgement Day. Ahead of the March release of the band's new album, other recommended videos include "Don't Look Down," "La Vie En Rose" and "I'll See You In My Dreams."

With ever-growing fan bases via social media, K Theory is looking for another stellar year in 2016. K Theory is the Bay Area electronic hip-hop trio of vocalist Malcolm Anthony, live conductor Dylan Lewman and Dustin Musser on keys, whose live performances and remixes of Lil' Wayne, Flo Rida, Wiz Khalifa and other big name acts are gaining national attention and millions of views on their YouTube channel. Originally created as the duo of Lewman and Musser, K Theory has been performing all over the country in recent years, with prominent stops at the Avalon Hollywood in Los Angeles, Electric Forest Music Festival in Michigan, Beyond Wonderland at the Shoreline Amphitheatre in Mountain View and the Imagine Music Festival in Atlanta. Just recently, SoundCloud abruptly removed all of K Theory's remixes so their You Tube/Trap National channel is the place to go listen to popular videos like Flo Rida's "GDRF," Lil' Wayne's "A Milli" and Fetty Wap's "Trap Queen."

Fresh off the signing to a worldwide deal with Sub Pop Records, San Francisco-based Heron Oblivion is anticipating the release of their debut LP this year. The quartet featuring Meg Baird on vocals and drums and Noel Von Harmonson on guitar is known for a number of music genres, such as funeral folk, pastoral and fuzz burn. But one quick look at the "Beneath Fields Live" video from the Fernwood Tavern in Big Sur suggests another profound influence is the so-called San Francisco Sound, developed in the 60s by such iconic bands as the Grateful Dead, Jefferson Airplane and Big Brother and the Holding Company. In recent months, Heron Oblivion has been performing at hotspots along the West Coast, such as the Sunset Tavern and Showbox in Seattle, San Francisco's legendary Fillmore and a high profile benefit performance at the Conservatory of Flowers in Golden Gate Park. Vocalist Baird, who also performs solo and the lead singer for the Philadelphia-based psychedelic folk band Espers, has upcoming tour dates in Melbourne and Sydney, Australia. Ahead of the release of Heron Oblivion's debut LP, music lovers can visit SoundCloud or YouTube for their current works.

In a recent interview with Christopher Prudhomme, the Painted Palms lead singer cites 60s psychedelic pop and acid pop house music from the 90s as inspirations. But the duo formerly based in San Francisco can also be compared to the top New Wave acts of the 80s, most notably the British duo Tears for Fears and their 1989 hit "Sowing the Seeds of Love." Originally from Lafayette, Louisiana, Prudhomme and his cousin Reese Donahue seem poised to enjoy much broader appeal following a very successful fall tour and positive exposure from multiple media outlets such as Billboard, The Deli Magazine and The Bay Bridged. Painted Palm's second album "Horizons" was released just months ago and includes noteworthy selections as "Refractor," "Waterfall" and a very Beatle-ish "Tracers." But music lovers must not overlook gems from the duo's previous albums, including "Spinning Signs," "Canopy," "Carousel" and their most popular music video, "Forever."