SAN FRANCISCO (CBS SF) -- The Bay Area's music community unites to help those affected by the destructive Wine Country wildfires on Thursday when Metallica tops a diverse bill including Dead & Company, Dave Matthews and more at AT&T Park for Band Together Bay Area.

Fresh from a string of fall European dates that were a part of the band's WorldWired Tour, Metallica will be playing San Francisco for the second time in the space of a few months after headlining the second night of the 2017 edition of Outside Lands in Golden Gate Park early last August. Though slated for a relatively short 75-minute set (the legendary metal quartet has been playing two and a half hours and even longer on some recent stadium dates), Metallica's rabid fans are sure to turn out in support of such a worthy cause. 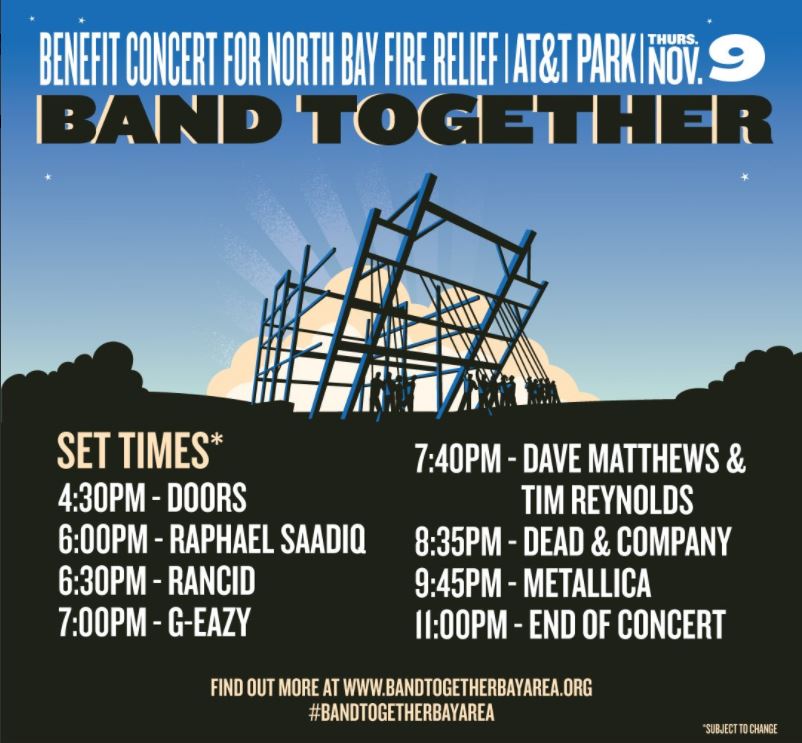 The program will begin at 5:45 p.m. with an interfaith blessing by the San Francisco Interfaith Council, followed by a video tribute to the resilience and strength of the North Bay communities impacted by the firestorm. In between sets, local celebrities and athletes including AT&T Park public address announcer Renel Brooks Moon, 49ers legend Joe Montana, San Francisco Giants greats Barry Bonds and Buster Posey and Olympic gold medalist Natalie Coughlin will honor heroes who rose to the occasion during the tragic fires.

The fires in the North Bay have burned an estimated 200,000 acres and 6,000 homes in Sonoma, Napa, Mendocino and Lake Counties, displacing thousands of residents. Damage estimates are in the billions of dollars and rising, and the cleanup and recovery efforts will be the largest and costliest in California history.

All funds from ticket sales will benefit Tipping Point Community, who have set up an Emergency Relief Fund for low-income, vulnerable communities impacted by the crisis, including vineyard workers, immigrants, displaced young people, and students. 100 percent of the ticket price will be donated to this fund. More information and tickets can be found at BandTogetherBayArea.org and TippingPoint.org.

There will also be a livestream of the concert available on the MetallicaTV YouTube channel and on Twitter starting at 5 p.m.

Organizers are encouraging guests to take the following ridesharing or public transit lines to the show:

Parking is located in Lot A, Lot C, Pier 48 and Pier 30/32. Parking lots open at 3 p.m. and cost is $38 per car. Secure bike parking is also available on the Portwalk between the viewing portals and the Dignity Health Center, and is operated by the San Francisco Bicycle Coalition.