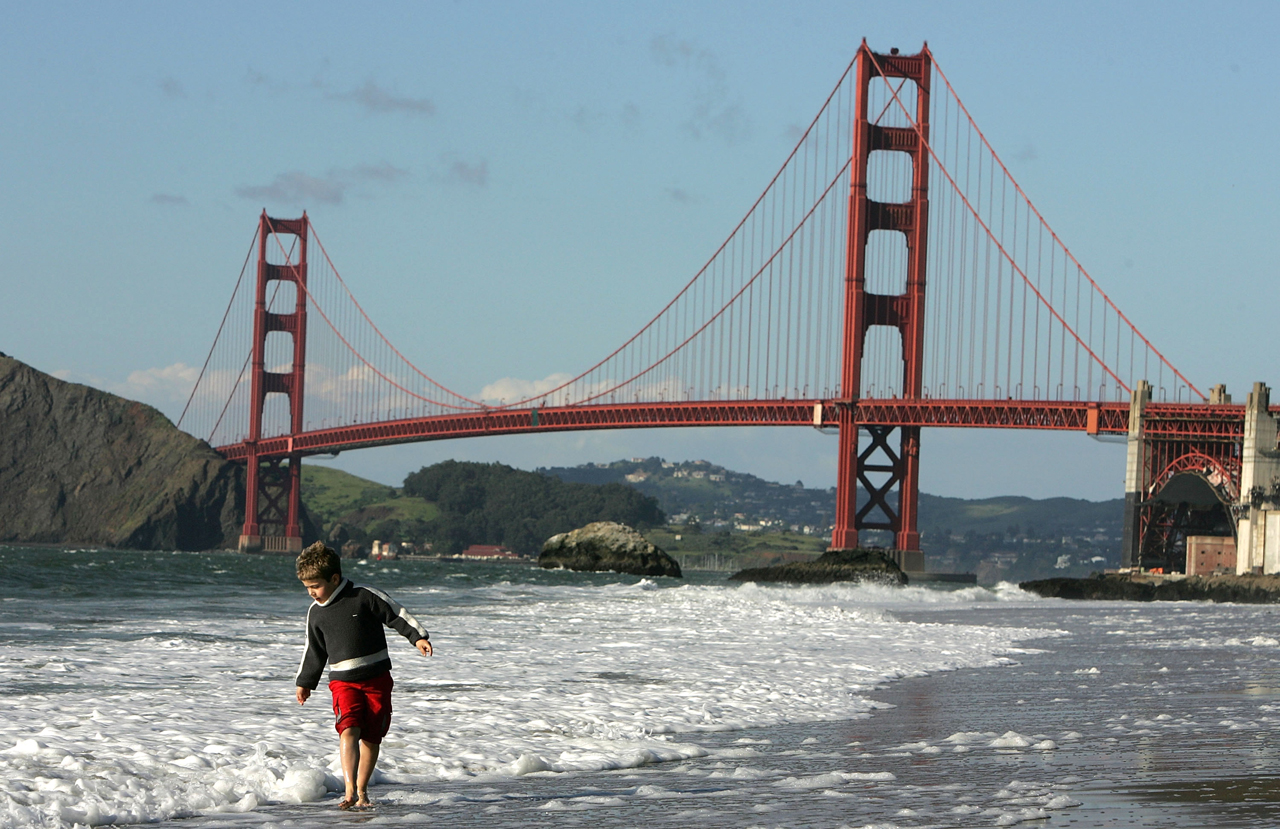 San Francisco is frequently regarded as one of the greatest destinations in the world. Contributing to the allure are not just the world class attractions and world class dining, but also the phenomenal walking trails scattered across the city. Here is a look at just five of the best scenic walking trails in the fascinating city of San Francisco.

This segment of the 1,200 mile California Coastal Trail connects Fort Point National Historic Site, with the shadows of the Golden Gate Bridge looming above and Baker Beach, in the southwest corner of the Presidio of San Francisco. By following the map provided by the Presidio, visitors can easily find their way towards the Bay Trail near the beginning of the hike, then onto the California Coastal Trail, with a recommended stop at the Golden Gate Overlook at about the halfway mark. After departing the overlook, visitors will then hike further south along the coastal trail, with an alternative path along the more challenging yet equally popular Batteries to Bluffs Trail. Either path will yield spectacular views of the Pacific Ocean and the rugged cliffs along the California Coast, although dogs aren't permitted on the Batteries to Bluffs Trail. A one-way hike along the California Coastal Trail to Baker Beach is two miles and typically takes 45 minutes. Fort Point is located at the northernmost tip of the Presidio on Marine Drive, approximately one mile from Crissy Field, which in itself is an amazing place for a walk and certainly one of the most popular in the city. From the opposite direction, Baker Beach is located off Lincoln Boulevard at Gibson Road, where a larger parking lot can be found.

Located along the rocky cliffs overlooking the Pacific Ocean in the northwestern portion of the city, Lands End is easily one of the most popular spots for a scenic walk. The best place to park and begin a visit is at the Lands End parking lot just north of the world-famous Cliff House and directly in front of another major San Francisco attraction — the ruins of the Sutro Baths, a former swim palace built in the 19th century which featured the world's largest indoor swimming pool at the time of its opening. The most popular trail within Lands End is another segment of the California Coastal Trail, extending from Ocean Beach to China Beach at a distance of 2.9 miles, with spectacular views of the coastline nearly every step of the way. Not everyone will want to hike nearly six miles round-trip but among the top sites to see are the USS San Francisco Memorial, Mile Rock Overlook and the Labyrinth at Eagle Point, one of the city's most breathtaking hidden treasures. Additional parking can be found at El Camino del Mark parking lot adjacent to the USS San Francisco Memorial, Sutro Heights parking lot at the southern end and the Legion of Honor, where limited parking is available.

With sweeping views of the San Francisco skyline, Mount Davidson is the San Francisco's highest hill at 927 feet. The one-mile trek up to the highest point is considered easy for most walkers and usually takes less than 15 minutes to reach the top. At the summit is the 103-foot-tall Mount Davidson Cross, said to be one of the world's tallest crosses and visible from several spots in the city. The park entrance is located the corner of Lansdale Avenue and Dalewood Way, where street parking is available. Visitors taking public transportation can take the Muni Metro rail via routes K, L, M or T to the West Portal Station, then transfer to Muni bus route 48 to Del Sur Avenue, near the northern end of the park.

Not to be mistaken with Sutro Tower near Twin Peaks, Mount Sutro is often described as the most beautiful place in San Francisco. Covering 61 acres, the Open Space Preserve is described as a captivating hidden forest within the city that's punctuated by the 908-foot summit named after Adolph Sutro, the influential mayor of San Francisco who served between 1894 and 1896. With six marked trailheads a trail map, such as the one provided by the University of California San Francisco (UCSF), should be reviewed in advance of the hike. While there is paid parking at the UCSF visitor lots on Parnassus Avenue, free parking may be found on city streets.

Quietly tucked away in the heart of Golden Gate Park and away from the park's premier attractions is Strawberry Hill. Sitting in the middle of Stow Lake, a man-made lake completed in the 19th century, Strawberry Hill features a Chinese pagoda, picnic area and Huntington Falls an artificially made waterfall and one of two within the park. The island is accessible by two bridges from the Stow Lake Drive encircling the lake, and hiking trails to the 430-foot summit of Strawberry Hill should be relatively easy for most visitors. At the summit, hikers are afforded views of the Golden Gate Bridge and much of the western portion of San Francisco. Plenty of parking is available at the historic Stow Lake Boathouse. Visitors looking for further walking and sightseeing in Golden Gate Park should make a stop at the de Young Museum, the California Academy of Sciences and/or the Japanese Tea Garden.

Related: Visitor's Guide To The Legion Of Honor