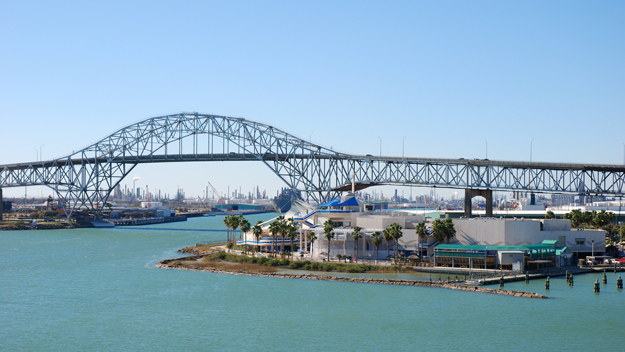 With temperatures averaging in the 90s during the summer, Texas can be notoriously hot and unpleasant. But one of the best ways to cool off in the Lone Star State is to head to the Gulf Coast, where water temperatures are much like your average pool. What's more, there's a wide range of overnight accommodations and dining to fit anyone's budget along with great attractions to make for the perfect getaway. Here are five of the best Texas beach towns to consider for your next trip.

With a population of more than 300,000, Corpus Christi doesn't exactly meet the definition of a town. But to leave this coastal city off a list of best spots in Texas with a beach would be an injustice. Each year, millions of people visit the largest city on the Texas Coast for water recreation, culture, live entertainment and great dining.

Visitors can get easily get around the city with bus and ferry service provided by the Corpus Christi Regional Transportation Authority. There are five primary transit stations in the city, including the new Staples Street Station, located across from city hall. The Harbor Ferry transports passengers between Peoples Street T-Head at the Corpus Christi Marina and the Texas State Aquarium/North Beach area. Taxi service like Green N Go Cab and Uber, and commercial tours are also available in the city.

There are several lodging options in Corpus Christi, including more than 80 hotels, vacation rentals and bed and breakfasts, as well as campsites. Recommendations for moderately priced accommodations include the Omni Hotel, Staybridge Suites, Best Western Marina Grand Hotel, Country Inn and Suites by Carlson and Embassy Suites Hotel.

With more than 500 restaurants in Corpus Christi, visitors have a multitude of dining options, many with oceanside views. Among the solid choices are Republic of Texas Steakhouse, Ginger Café, Andy's Kitchen, Z Counter and Snoopy's Pier.

The Texas State Aquarium, USS Lexington, Corpus Christi Marina, Selena Museum, Water Street Market and Padre Island National Seashore are among the top attractions in the city. The recently completed Velocity Games is an annual event known as the top windsurfing event in the country.

This coastal city less than an hour drive from Houston gained international prominence during the 1960s after Glen Campbell released one of his biggest hits – "Galveston". Today, Galveston remains one of the most popular coastal destinations in the Lone Star State and Campbell's hit single is the city's official anthem. From fabulous architecture and museums to a wealth of outdoor activities and amusements, Galveston offers something for visitors of all ages.

Island Transit maintains seven ADA-accessible bus routes with service to the most popular attractions. A popular trolley service is due to being restored after it was damaged by a hurricane. A number of tours are also available in the city, including Cool Tours, Duck Tours and Treasure Island Tour Train. Galveston also has several taxi companies, like Yellow Cab, Tropical Taxi and Uber.

Many of the best overnight accommodations can be found right on the beaches of Galveston. Recommendations include the San Luis Resort, The Galvestonian, Moody Gardens Hotel, Hotel Galvez and the Tremont House. Bed and breakfasts, vacation rentals and RV parks are also available.

There are hundreds of dining choices in Galveston, ranging from cheap eats to upscale. Among the top choices are the Pelican Club, Steakhouse at San Luis Resort, Rudy and Paco, Shearn's Seafood and Prime Steaks and Eatcetera.

Galveston offers a variety of outdoor activities like horseback riding, whale watching and sport fishing, as well as interesting museums and one of the most popular amusement parks in Texas – Schlitterbahn Galveston Island Waterpark.

About half way between Houston and Galveston, Kemah is best known as home to one of the best family friendly destinations in Texas. The top draw is Kemah Boardwalk, featuring one of the nation's most acclaimed boardwalks and a variety of amusement rides, dining, shopping and an outstanding hotel. Located along the shores of Galveston Bay, Kemah also offers boat cruises, sailing, tours, horse carriages and other attractions.

No public bus service is available in Kemah, although there is a shuttle service that operates during peak times of the year and taxis. Kemah Boardwalk's free ferry service is described as "the shortest ferry ride in the world".

Located in the center of Kemah Boardwalk, the Boardwalk Inn is a fashionable boutique hotel graced with spectacular oceans views and wonderfully appointed rooms and suites. Other excellent places to stay are the Holiday Inn and Kemah Escape.

Kemah Boardwalk is the main attraction with special events held all year with upcoming events such as special Fourth of July celebration, a summer concert series held on Thursday nights and a Craft Beer Festival. Among the notable attractions away from the Boardwalk are sailing charters, a visit to the lighthouse and a side trip to the Houston Space Center a short drive away.

Many affordable hotels can be found at Port Aransas along with beach rentals, cottages and free camping and RV parking on the beach for up to three days. Recommended hotels include Island Hotel, 3rd Coast Inn, Palmilla Beach Resort and Golf Club and Seashell Village Resort.

Port Aransas features 6.3 miles of beach along the Gulf of Mexico and is best known as the "Fishing Capital of Texas." Other popular activities include golf at Palmilla Beach Golf Club, boating, kayaking and collecting seashells on the beaches of Mustang Island.

Related: 5 of The Cheapest Spring Break Getaways In America

Located just 25 miles from Corpus Christi, South Padre requires a section all by itself. One of the most popular destinations in the country for spring breakers, this small town lies on the world's largest barrier and second largest by area in the country.

South Padre Island offers a free shuttle known as The Wave. The convenient service runs every thirty minutes and makes stops at several notable spots in town, including city hall, the lighthouse, Schlitterbahn Water Park and the visitors center. Despite a population of under 3,0000, South Padre Island offers a variety of lodging, dining and shopping choices and several attractions.

More than 80 budget to moderately priced restaurants can be found in South Padre Island. The consensus top choice for dining is Yummies Bistro, which is only open for breakfast and lunch. Other recommended spots are Beachside Bar and Grill, Gabriella's Italian Grill and Pizzeria, Padre Brewing Company and Joe's Oyster Bar.

Among the best things to see and do include horseback riding, dolphin watches, sport fishing, Port Isabel Lighthouse and a visit to one of America's best waterparks – Schlitterbahn. South Padre Island is also known as the "Sand Castle Capital of the World," "Fireworks Capital of Texas" and host to the largest saltwater fishing contest in Texas.

Related: 10 Reasons To Make Austin, TX Your Next Vacation