7:20 p.m. UPDATE: Protesters made their way across Sacramento to the Capital City Freeway, only to be turned back by the California Highway Patrol.

Meanwhile a vigil is underway for Stephon Clark in South Sacramento.

5:15 p.m. UPDATE: As day two of protests intensify in the Stephon Clark shooting case, Civil Rights activists from across the state are in Sacramento, meeting with department of justice officials.

NAACP executives are asking the feds to get launch a third party investigation, to answer key questions raised in the police body cam footage showing the moments  Stephon Clark was shot and killed by Sacramento Police.

NAACP Sacramento director Betty Williams is asking the FBI and Dept. of Justice to launch their own independent investigation into the deadly shooting.

"I knew it was an issue when reports kept coming back different. He was shot in the back four times. He had a crow bar. He had a tool bar. He launched. He didn't launch. There was a weapon. There was no weapon," she said.

According the video, there was only a cell phone in Stephon Clark's hands — when two police officers fired twenty shots, killing the 22 year old in the backyard of his grandmother's home.

"It's just too much happening in Sacramento for this to get overlooked," said NAACP Chari Ardell Harrison.

4:45 p.m. UPDATE: Protesters are making their way toward Interstate 5 where police have the ramps closed off.

Earlier, a woman was splashed with a bottle during a confrontation with protesters. A protester later offered her his sweatshirt.

4:05 p.m. UPDATE: Protesters have left the steps of the Capitol are marching back through downtown.

3:51 p.m. UPDATE: The ramps on and off I-5 at J Street are blocked in Sacramento to prevent protesters from entering the freeway.

3:45 p.m. UPDATE: Protesters once again assemble on the west steps of the capitol.

3:28 p.m. UPDATE: Protesters left the J Street onramp, went to Old Sacramento, and they now appear to be headed back to the capitol. Click here to watch live coverage. Viewer discretion is advised.

2:50 P.M. UPDATE: Protesters are trying once again to get back on northbound I-5 at J Street. They're being met with police on horseback and police in riot gear. 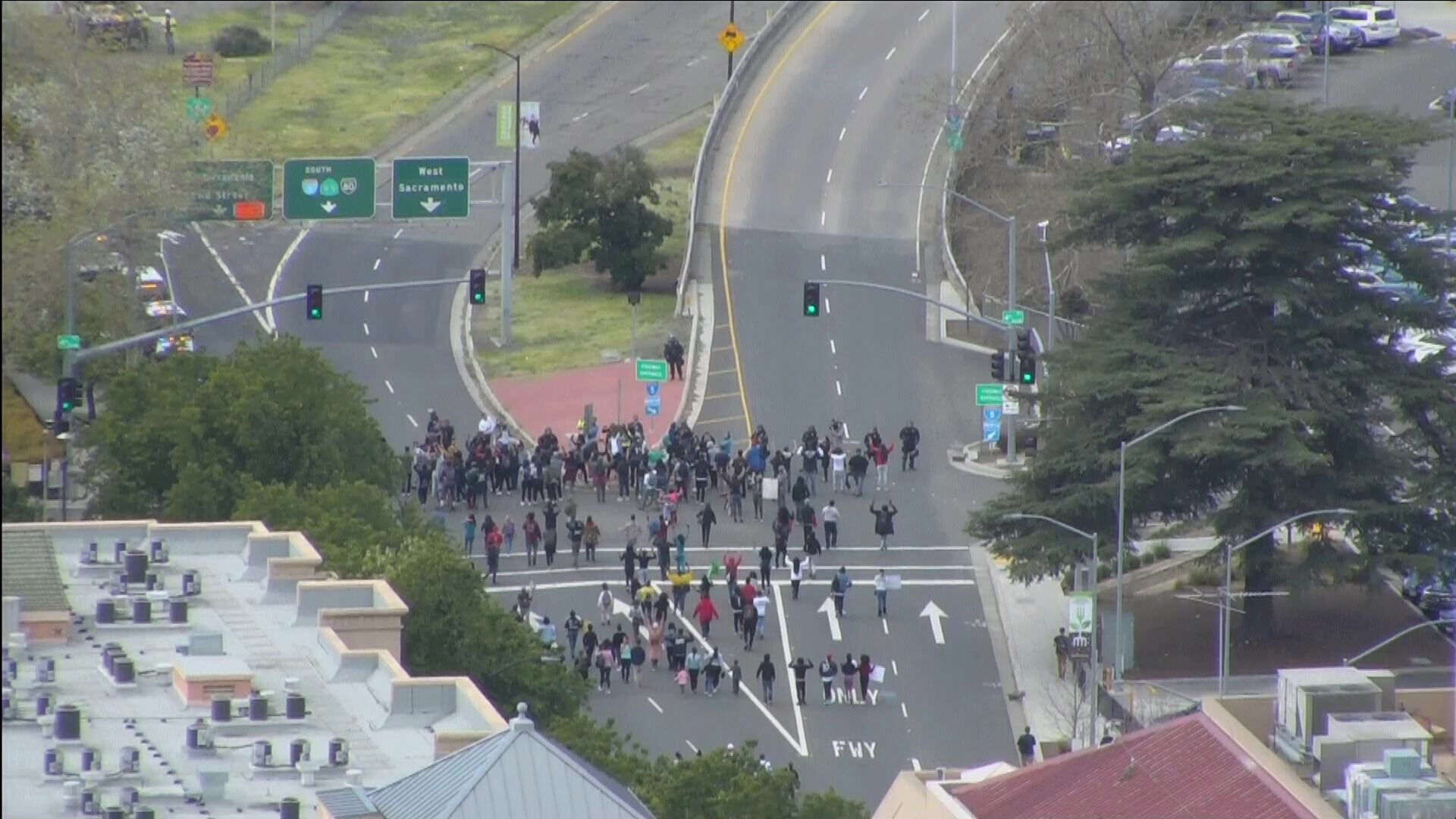 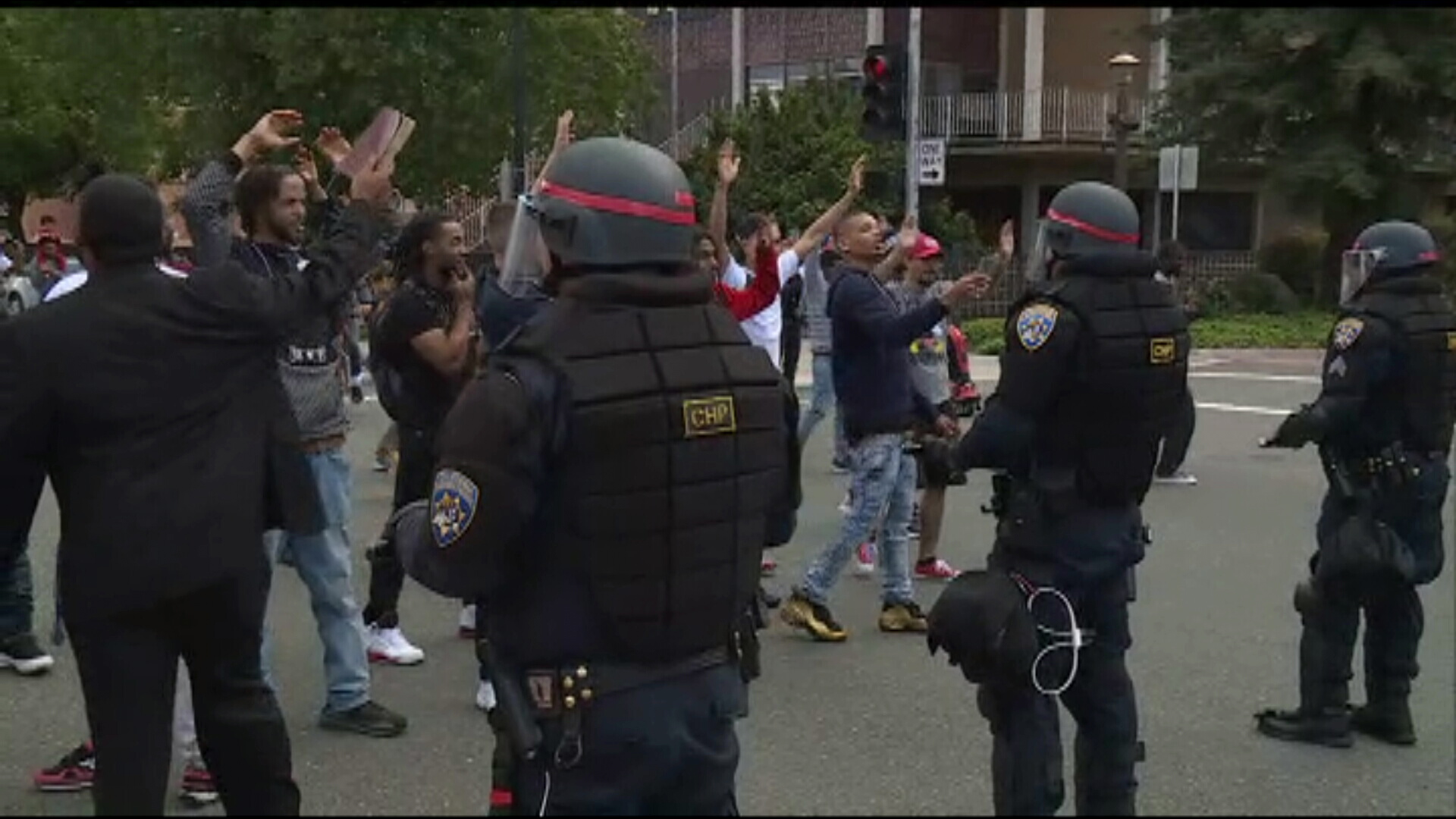 The group gathered just after noon at Tower Bridge and marched east to the west steps of the capitol where they peacefully demonstrated by chanting and holding signs.

They eventually left the capitol and walked to the area of Cesar Chavez Park, blocking traffic and yelling at drivers. They're now in the area of the county courthouse.

At one point, a protester stood on the hood of an SUV, and soon after, one punched out the vehicle's back window.

On Thursday, protesters closed down portions of Downtown Sacramento by marching onto Interstate 5 and then to the Golden 1 Center where they blocked entrances.

After the game, Kings owner Vivek Ranadive addressed the small crowd from center court, surrounded by Sacramento's players and coaches. He expressed sympathy for the family of Stephon Clark, 22, who was shot Sunday in the backyard of his grandparents' home.

"We are so very sorry for your loss," Ranadive said. "We at the Kings recognize people's abilities to protest peacefully and we respect that. We here at the Kings realize that we have a big platform. It's a privilege but it's also a responsibility. It's a responsibility that we take very seriously and we stand here before you, old, young, black, white, brown, and we are all united in our commitment."

Clark was suspected of breaking into cars in a South Sacramento neighborhood. Police were called and as a helicopter hovered overhead, Clark ran. Officers on the ground cornered him and, believing he had a gun in his hand, fired 20 rounds.

Afterward, police found no weapon, only a cellphone.

Sacramento Mayor Darrell Steinberg said he was horrified by Clark's death but won't second-guess the "split-second decisions" of the officers.

Independent experts said the footage from body cameras and the police helicopter raise more questions than they answer.

The officers appeared to believe they were in danger, they said, and if so the shooting was likely legally justified.

The Sacramento Police Department said officers were responding to reports of a man seen breaking into at least three vehicles and later into a neighbor's home. The police said deputies in the helicopter saw Clark break a neighbor's sliding glass door before jumping a fence.