GRASS VALLEY (CBS13) — A Grass Valley Charter School fundraiser set for this weekend is canceled, after social media posts by conspiracy theorists connected the event to a possible terror attack.

Law enforcement confirmed the far-fetched threats described in the posts are not credible, but event organizers made the decision to cancel out of an abundance of caution.

The third annual Blue Marble Jubilee at the Nevada County Fairgrounds was expected to draw big crowds on Saturday.

"Nobody should have to live in this kind of environment," Grass Valley Charter School parent Kathy Foster said.

Willoughby and Foster are co-producers of the fundraiser that was expected to draw 1,500 people to the small community.

The festive event is now canceled following a strange sequence.

"It's ridiculous and something you sort of you want to laugh it off as something that doesn't have a lot of merit," Willoughby said.

A deep-state conspiracy theorist took that tweet, dissected it, and came up with an acronym from Comey's five jobs that are the same as the initials in the Grass Valley Charter School Foundation.

That conspiracy theorist then found letters in the tweet that spelled "jihad" — and posted it to social media. 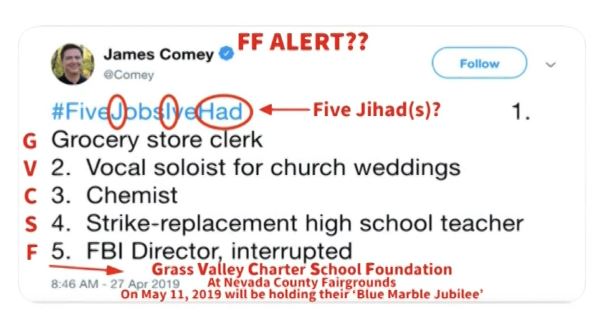 The message then spread among conspiracy theorists.

"Disbelief, in many facets," Willoughby said. "Number one, that this could be happening to us in a tiny little town."

Willoughby and Foster say out of concern someone could take the message seriously, they felt forced to cancel their fundraiser.

"These theories although based in no reality or fact or evidence can often drive unstable people to do really dangerous things," Willoughby said.