Investigators believe the same suspect committed multiple incidents in neighboring jurisdictions between January and March from the Pocket area in Sac, to Elk Grove, and Galt.

"Absolutely disturbing for those folks that have to see that activity take place in front of them," said Officer Jason Jimenez of Elk Grove PD.

The news is especially unsettling to women in the area who have been accosted once before.

"It's disgusting and gross and I feel like people get off on it and it's really gross and feels violating when somebody does that while staring at you," said a local mother.

In another case, he pulled up to a mother and her 13-year-old daughter.

"Especially having a daughter, it's just terrible," she said.

"It's troubling not only as a police officer but as a father and a husband. The last thing I want is the suspect to pull up to my family or any other families in the community of Elk Grove and conduct the activities that he's been conducting," Jimenez said.

No one has been injured during the incidents, some have occurred in or near shopping center parking lots.

If you witness such behavior, call 911 immediately.

Investigators from the Sacramento Police Department encourage any witnesses with information pertaining to these incidents to contact the dispatch center at (916) 808-5471 or Sacramento Valley Crime Stoppers at (916) 443-HELP (4357).  Witnesses may also submit an anonymous tip using the free "P3 Tips" smartphone app. Callers can remain anonymous and may be eligible for a reward of up to $1,000.

The incidents cited by Sac police are listed below:

READ: Officials: Body Of 5YO Matilda Ortiz Has Been Recovered From The Stanislaus River

On Thursday, February 28, 2019, at approximately 5:45 p.m., in the 500 block of Florin Road, a Hispanic male adult in his late 30's to early 40s, pulled up next to the victim displaying his penis through the zipper of his pants for the victim to see.  The suspect did not say anything to the victim.  He was described as having darker skin, wearing dark clothing, possibly a hooded sweatshirt.  His vehicle was a newer black Honda Accord with black paper plates, with "5STAR" written in yellow.

Elk Grove Police had 5 cases. The vehicle description in all its cases has been described as two-door Honda Accord with a black colored paper plate with "5 STAR" printed in yellow (pictured below). 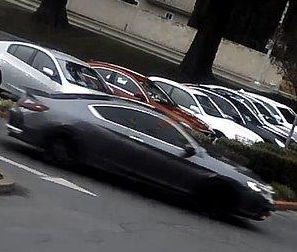 Anyone with information regarding this investigation is asked to call the Elk Grove Police Department Detective Bureau at (916) 478-8060 or the Sacramento Valley Crime Stoppers at (916) 443-HELP (4357).  Callers to Sacramento Valley Crime Stoppers can remain anonymous and may be eligible for a reward of up to $1,000.00. Tips can also be sent via SMS text message by entering CRIMES (274637) on a cell phone, followed by Tip732 (agency identification number) and the message.