California football coaches and the group "Let Them Play" held a press conference Friday morning, saying the state has failed its student-athletes.

Groups gathered statewide Friday evening. They say banning youth sports is not only impacting student scholarship opportunities but their mental and physical health as well.

At the Sunrise Mall, the crowd gathered around speakers in the parking lot who stood on a stage framed by American Flags. Some stood under pop-up tents and others held homemade signs that read "Let Us Play," "35 states and CA ain't 1" and "More Sports, Less Depression."

On Friday, Assemblyman James Gallagher (R-Yuba City) issued a press release about the "Let Them Play" Resolution, which he says has received bipartisan support in both the Assembly and Senate.

"This is a bi-partisan effort to bring back our youth sports," said Gallagher in the release. "This is for our kids. We need to get them off the bench and back onto the field."

Gallagher said he will be joining a rally in Chico.

Last month the state released updated youth sport guidelines, which squashed any hopes of having inter-team games and banned competitions for the time being.

The state uses a color-coded tier system for each sport based on their level of contact and transmission risk. It allows for outdoor practice and training in all counties as long as athletes can stay six feet apart.

As of Friday, 54 out of 58 California counties are currently in the purple tier.

While local health officials and school districts have the ability to tighten restrictions if they want to, the rules also prohibit teams from competing in out-of-state tournaments, as many club teams have done, during the pandemic.

Below is a chart of sports allowed in each reopening tier: 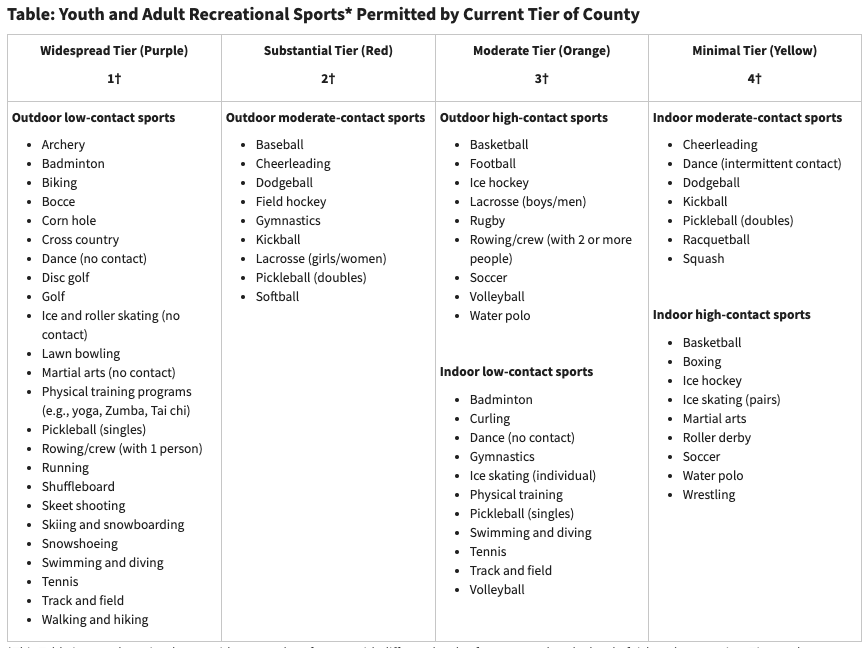