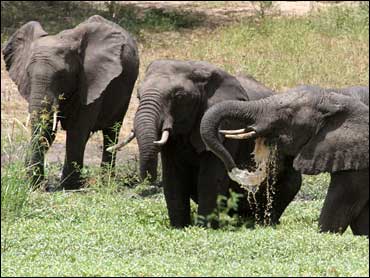 Elephants are usually among the top attractions at zoos.

But zoo elephants don't live as long as those in the wild, according to a study sure to stir increased debate about keeping the giant animals on display.

Researchers compared the life spans of elephants in European zoos with those living in Amboseli National Park in Kenya and others working on a timber enterprise in Myanmar. Animals in the wild or in natural working conditions had life spans twice that or more of their relatives in zoos.

The researchers found that the median life span for African elephants in European zoos was 16.9 years, compared with 56 years for elephants who died of natural causes in Kenya's Amboseli park. Adding in those elephants killed by people in Africa lowered the median life span there to 35.9 years. Median means half died younger than that age and half lived longer.

For the more endangered Asian elephants, the median life span in European zoos was 18.9 years, compared with 41.7 years for those working in the Myanmar Timber Enterprise. Myanmar is the country formerly known as Burma.

Animal care activists have campaigned in recent years to discourage keeping elephants in zoos, largely because of the lack of space and small numbers of animals that can be kept in a group. Debates have been especially vocal in Dallas and Los Angeles.

At the L.A. zoo, points out Early Show national correspondent Hattie Kauffman, four elephants have died since 1992. Billy, a 21-year old elephant, is the only one left.

The zoo plans a $42 million dollar expansion for a Pachyderm Forest but, instead of silencing critics, the plan has drawn mostly protests, Kauffman says.

At a recent public hearing, one woman said, "It all boils down to whether or not we believe we should have animals of this magnitude in captivity."

But at zoos such as one in Portland, Ore., officials say they're providing kids with a sense of wonder right in the middle of a city. "We live for how we can inspire children like that," says Mike Keele, the zoo's assistant dirctor, "because that's where they learn to care about animals and want to conserve them."

There is some good news, though. The life spans of zoo elephants have improved in recent years, suggesting an improvement in their care and raising, said one of the report's authors, Georgia J. Mason of the animal sciences department at the University of Guelph, Canada.

But, she added, "protecting elephants in Africa and Asia is far more successful than protecting them in Western zoos."

There are about 1,200 elephants in zoos, half in Europe, Mason said in an interview via e-mail. She said researchers concentrated on female elephants, which make up 80 percent of the zoo population.

"One of our more amazing results" was that Asian elephants born in zoos have shorter life spans than do Asian elephants brought to the zoos from the wild, she added in a broadcast interview provided by the journal Science, which published the results in its Friday edition.

She noted that zoos usually lack large grazing areas that elephants are used to in the wild, and that zoo animals often are alone or with one or two other unrelated animals, while in the wild they tend to live in related groups of eight to 12 animals.

In Asian elephants, infant mortality rates are two times to three times higher in zoos than in the Burmese logging camps, Mason said via e-mail. And then, in adulthood, zoo-born animals die prematurely.

The study confirms many of the findings of a similar 2002 analysis prepared by the Royal Society for the Prevention of Cruelty to Animals. One of the authors of the new study, Ros Clubb, works for the society.

Steven Feldman, a spokesman for the Association of Zoos and Aquariums, contended the report did not reflect conditions in North America. In addition, he said, it is hard to compare conditions in zoos and in the wild. "Every event in a zoo is observed," he said, while scientists can study only a small number of events in nature.