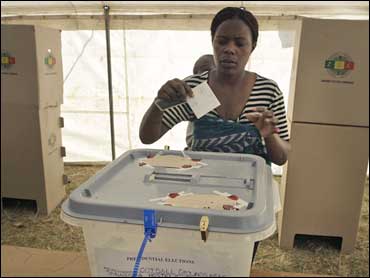 Roaming bands of government supporters heckled, harassed or threatened people into voting in a runoff election Friday in which President Robert Mugabe was the only candidate, ensuring he will remain in power despite international condemnation of the balloting as a sham.

Residents said they were forced to vote by threats of violence or arson from the Mugabe supporters, who searched for anyone without an ink-stained finger - the telltale sign that they had cast a ballot.

Opposition leader Morgan Tsvangirai, who withdrew from the runoff after an onslaught of state-sponsored violence against his Democratic Movement for Change, said the results would "reflect only the fear of the people."

"What is happening today is not an election. It is an exercise in mass intimidation," he said at a news conference.

Secretary of State Condoleezza Rice called the vote a "sham," and said the United States would use its position as president of the U.N. Security Council until July 1 to drive international condemnation of Mugabe's regime.

"Those operating in Zimbabwe should know that there are those ... who believe that the Security Council should consider sanctions," she said at a meeting in Japan. "We intend to bring up the issue of Zimbabwe in the council. We will see what the council decides to do."

U.S. Ambassador to Zimbabwe James McGee told CBS News recently that due to the fact that the new parliament was never convened, and only parliament can install a president, Mugabe is governing the country without any mandate - illegally. (Read more on McGee's interview.)

The presidents of Burundi, Kenya, Rwanda, Tanzania and Uganda, in a rare comment about the affairs of another African country, said Zimbabwe's one-candidate runoff, "cannot be a solution," to the country's political crisis. The presidents, at a regular summit of the East African Community held in Kigali, Rwanda, urged Mugabe's and Tsvangirai's parties "to come together and work out an amicable solution through dialogue in the interest of all Zimbabweans."

Jacob Zuma, the head of South Africa's African National Congress, said the situation in Zimbabwe was "extremely difficult and distressing."

"We reiterate that the situation is now out of control," he said in Johannesburg, South Africa, in one of the few times a senior South African politician has openly criticized Mugabe. "Nothing short of a negotiated political arrangement will get Zimbabwe out of the conflict it has been plunged into."

One of the few foreign journalists allowed into the country, Chris McGreal, told CBS News how voters were being terrorized:

"On the streets of the townships there are armed militias moving around, burning people out of their homes if they think they're opposition supporters, beating people up and snatching women and raping them. And I think that people are absolutely terrified in many places," reported McGreal.

A cell phone video showing police officers being forced to vote in front of their bosses, despite the fact that the election was supposed to be done by secret ballot, showed how corrupt the voting was, reports CBS News chief foreign affairs correspondent Lara Logan.

Reporters and independent observers in Harare saw low turnout. As polls closed at 7 p.m., officials at one Harare station said they hadn't seen a voter for several hours.

Paramilitary police in riot gear deployed in a central Harare park, then began patrolling the city. Marshals led some voters to polls, and militant Mugabe supporters roamed the streets, singing revolutionary songs, heckling people and asking why they were not voting.

Human rights activist Dusani Ncube estimated that fewer than 2,000 people voted in Bulawayo, Zimbabwe's second-largest city. But he said people in surrounding rural areas were told that if they did not vote their homes would be burned down.

Human rights groups have said tens of thousands of rural Zimbabweans had been displaced by campaign violence and would not be able to vote.

"I've got no option but to go and vote so that I can be safe," said a young woman selling tomatoes in Harare.

A gunman in civilian clothes was seen attacking a TV news cameraman and the voter he was interviewing on a Harare street, then forcing them into a police vehicle. In addition, two Zimbabwean freelance journalists were detained by police Friday as they waited to watch Mugabe vote at a Harare polling station.

Hundreds of journalists, mainly from Western media organizations, have been banned from covering Zimbabwe's elections.

Tsvangirai, whose name remained on the ballot because his withdrawal on Sunday came too late, said he still wanted negotiations about a transitional authority for Zimbabwe but was not sure whether he could talk with Mugabe, 84.

The two leaders have been under pressure to sit down and find a solution to the crisis in Zimbabwe.

Mugabe, who has been president since independence in 1980, offered an olive branch to the opposition Thursday, saying he was "open to discussion" with them.

He appeared jovial as he voted, telling a reporter in Harare he was feeling "very fit, very optimistic, upbeat and hungry."

Shortly after voting, Mugabe told Southern African Development Community observers he was confident he would be victorious, a spokesman for the key regional bloc said on Angolan state radio.

Marwick Khumalo, head of the Pan-African Parliament observer mission, told the BBC the mood in Harare was somber and that the turnout was low.

He said while walking in one high density suburb, observers mistook a long line of people for voters waiting at a polling station, only to find that the people were queuing for bread.

"It was quite a very long queue," he said.

Khumalo said he had not seen signs of intimidation and that the organization would make an announcement on the election on Sunday.

However, he said he had not seen "the ingredients that make this election free and fair."

Tsvangirai was first in a field of four in the March vote, an embarrassment to Mugabe. The official tally said he did not gain the votes necessary to avoid a runoff against Mugabe. Tsvangirai's party and its allies also won control of parliament in March, dislodging Mugabe's party for the first time since independence in 1980.

Mugabe was once hailed as a post-independence leader committed to development and reconciliation, but in recent years has been denounced as a dictator intent only on holding onto power through intimidation and election fraud.

Zimbabwe was the topic of long, closed-door discussions Friday in Egypt among foreign ministers gathered ahead of an African Union summit that begins Monday - and that Mugabe has said he will attend.

Some AU members say the runoff shouldn't have been held, while others, such as regional powerhouse South Africa, refuse to publicly criticize Mugabe even on that point.

"Our position is that the parties in Zimbabwe should work together for the future of Zimbabwe," South African Foreign Minister Nkosazana Dlamini-Zuma told AP Television News.