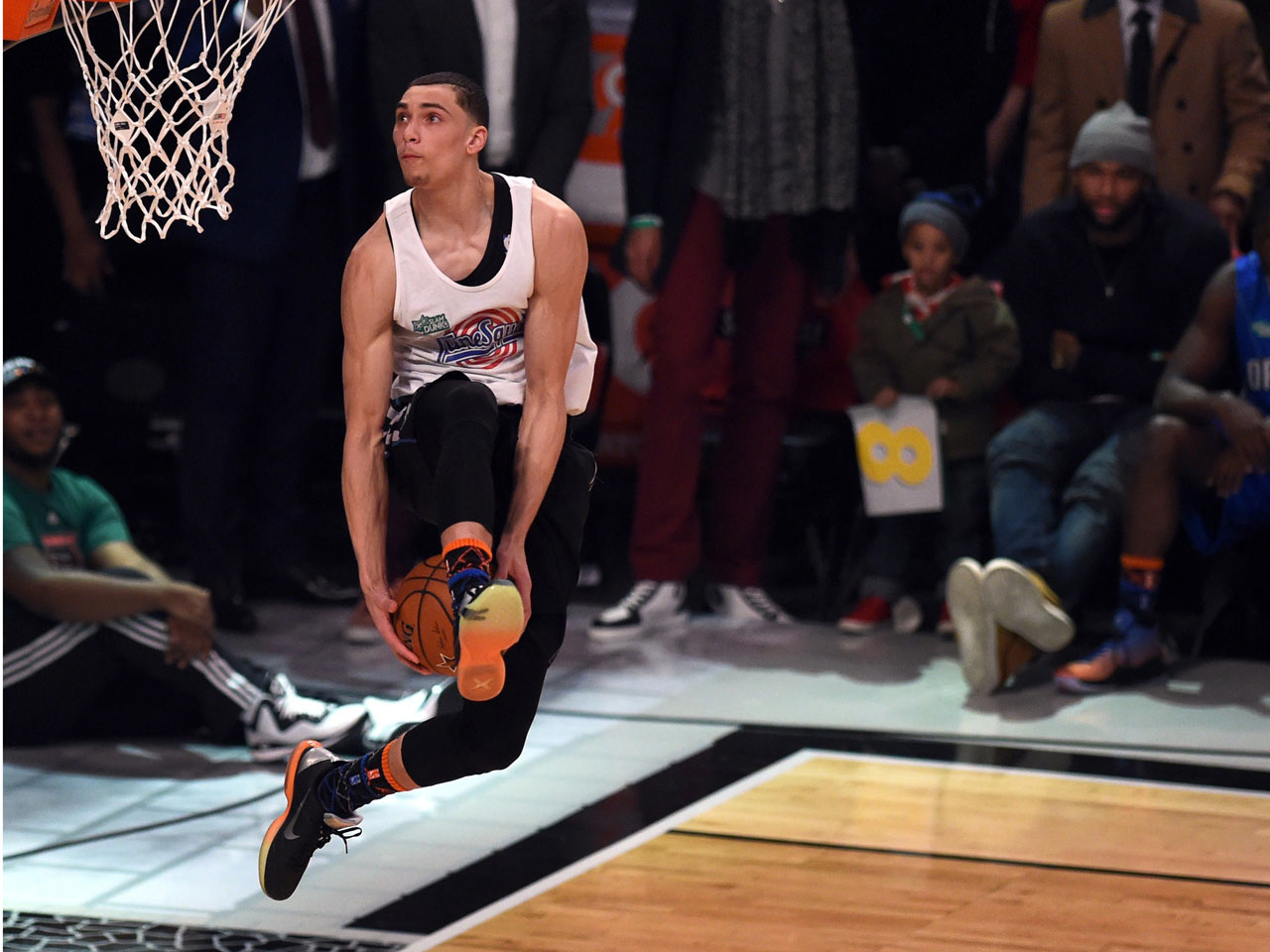 NEW YORK - Stephen Curry honored a fallen fan the best way he knew how. Zach LaVine made a name for himself in a dunk contest that lacked star punch.

Curry paid homage to one of the three victims of the shooting in North Carolina, writing a message to Deah Shaddy Barakat on his sneakers for the shooting stars competition, then swapping those for a different color pair for the 3-point contest. Barakat was one of three Muslim college students killed Tuesday in Curry's home state.

"It only seemed right to honor him and his family, and hopefully they know that people are thinking about them," Curry said. "They're not alone, and hopefully it can give them some kind of peace and comfort knowing that he was a special guy. And I just did my little part to shed light toward him."

Curry said there were several connections to the family that touched him.

He said Barakat did his wedding photo similar to a magazine cover featuring Curry and his wife, Ayesha. Barakat also wore a No. 30 jersey - Curry's number - in basketball leagues and some of Curry's family members even played pickup games with Barakat in North Carolina.

"They all spoke highly of him," Curry said. "It's a great platform to be on, but it only seemed right."

Curry, the starting point guard for the Western Conference in Sunday's All-Star game at Madison Square Garden, made sure he'd have the chance to shine a bright light on Barakat and his family.

He scored 27 points in the final round. Curry connected on 13 consecutive shots until missing his final attempt, bringing fans and celebrities roaring to their feet after every swish at Brooklyn's Barclays Center.

Thompson, who had an opening-round best of 24, scored only 14 points in the final round. Cleveland's Kyrie Irving finished second with 17 points in the three-man final.

It was a rare year when the 3-point competition had as much - if not more - intrigue heading into it than the dunk contest because of the notable names who were - and weren't - participating in each.

Even still, LaVine left a lasting impression few will forget.

The 19-year-old Timberwolves rookie scored a perfect 100 in the opening round. He highlighted his scintillating start with a through-the-legs, one-handed reverse slam, wearing a white No. 23 Jordan jersey for what he dubbed the "Space Jam" dunk.

On his second dunk, he tossed the ball up, put it behind his back in the air and threw down a powerful one-handed slam for another 50 from the Hall of Fame judges - Julius Erving, Walt Frazier, Nate Archibald, Bernard King and Chris Mullin.

LaVine had a final round score of 94 to overtake Orlando's Victor Oladipo, who struggled to convert his first attempt in the final and finished with a 72 in the championship round. LaVine became the first Timberwolves player to win the dunk contest since Isaiah Rider in 1994.

"I'm still on cloud nine. I feel like I'm dreaming," LaVine said. "Seeing all the dunk contests and people hoisting the trophy, I just saw myself do it and lived it. So it's a dream come true. I'm glad my family is here to witness it and go through it."

Milwaukee's Giannis Antetokounmpo, aka The Greek Freak, and Brooklyn's Mason Plumlee didn't advance past the opening round.

Even with all the above-the-rim athleticism, the MVP frontrunner put on quite a show from long distance.

Curry, who set the NBA-record with 272 3-pointers in a season two years ago, finally took home the 3-point crown on his fourth try. He earned bragging rights over his fellow "Splash Brothers" star in the process, putting pressure on Thompson to follow his spotlight-stealing final round.

Atlanta's Kyle Korver, who is shooting a league-high 52.3 percent from beyond the arc, and defending champion Marco Belinelli of San Antonio never made it past the first round with scores of 18. Portland's Wesley Matthews finished with 22, Los Angeles Clippers guard J.J. Redick scored 17 and Houston's James Harden had 15.