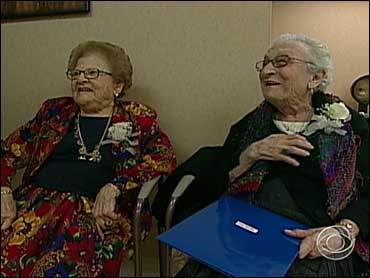 On a normal day at the Menorah Park senior living center in Cleveland, it's pretty easy to get an appointment at the beauty salon.

But when CBS News correspondent Steve Hartman visited, it was no normal day.

Women were lined up to be jacked up and dolled up. They each got new lashes and lips and enough hairspray to down a bird in flight.

This was the oldest group of women to ever go through the Jewish right of passage. Normally, girls are 13. One woman was 96 years old. Another, 94. One said, "I am 89 years old and I am the baby of the Bat Mitzvah class."

The tradition of Bar Mitzvahs for boys goes back thousands of years, but Bat Mitzvahs are relatively new. In fact, these women said when they were little, no girl in their right mind would have the chutzpa to even consider such a thing.

"No way! You didn't even think of it, how dare you! " one woman exclaimed.

Of course, things changed in the '60s, paving the way for this year's historic event, broadcast live around the world on Radio J.

Their teacher, Rabbi Howard Kutner, said, "As we celebrate their achievement, they've taught us never to say, 'at my age?!'"

He said preparation wasn't easy, and the women studied for seven months. "That's why I think this is a pretty amazing group."

For starters, they had to learn how to read Hebrew. "It's just a challenge," one woman pointed out, "even to memorize something, at 90."

If they messed up, one woman explained, "Nobody will know the difference. That's what's so wonderful about Hebrew, nobody knows anything about it."

And with that, these great-grandmothers finally became adults in their Jewish faith.

So what's the next goal?

"Oh, I have one," a woman said. "I'm going back to college and try out for cheerleading."

She'll be on her own with that one.