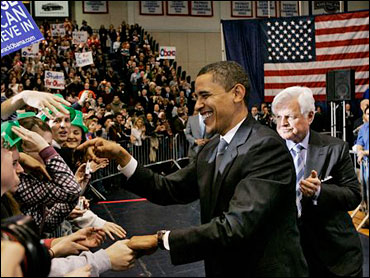 For young voters, Rosa Parks' refusal to sit at the back of a bus in Montgomery, Ala., in 1955 is schoolbook history. Even the racially charged 1992 riots in Los Angeles are a distant memory.

The United States is far from a blueprint for racial harmony, but for today's young adults - all born after segregation was outlawed in the mid-1960s - race is not the issue it once was.

They have grown up with Oprah Winfrey and Michael Jordan among their highest-profile and wealthiest role models. And in their everyday lives, they are much more likely than their elders to have friends of another race, studies show.

Is it any wonder, then, that young adults have been the most willing age group to support a black man for president?

Primary exit polls conducted for The Associated Press illustrate the generational shift that has helped Barack Obama secure the Democratic presidential nomination. About 56 percent of Democrats younger than age 30 supported Obama. That number dropped steadily with each age bracket to a low of 30 percent for voters 65 and older.

Many young voters say a diverse background is an asset for a candidate.

"Rather than just being tolerant of race, we embrace and accept our differences," says Alisha Thomas Morgan, a 29-year-old black state lawmaker in Georgia. "We all recognize that racism still exists. But I think younger people are much more willing to get over it."

They also are more accustomed to seeing people of color in positions of power. The country has, for instance, had a black secretary of state for the past seven-plus years.

"I shouldn't say we're taking it for granted. But it's not especially strange to us," says Tobin Van Ostern, a junior at George Washington University who is spending his summer in Chicago as a leader for Students for Barack Obama.

Van Ostern, who is white, says he understands that Obama's victory is historic.

"But it's one that seems appropriate for the direction the country is going," he says. "In numerous ways, it presents a new image of the United States to the world - and not just because of the color of his skin."

Throughout the primary season, Obama supporters endured jabs from pundits and Hillary Rodham Clinton backers who called them "latte drinkers," among other labels. To them, it seemed to suggest elitism and the notion that young adults were taken with the Illinois senator because it was trendy.

Certainly, the chance to vote for a black man is part of the appeal, Morgan says. "It's fine if they vote for him because he's African-American, as long as they don't stop there," she says. "But I would be voting for Obama whether he was white or whatever. The fact that he is African-American is a plus."

The way Patricia Turner sees it, Obama's race is just one factor that makes him more accessible to younger voters. Turner is a professor of African-American studies at the University of California, Davis, a diverse campus where she says no one racial or ethnic group is the majority.

She recalls a conversation at a recent university dinner where her table included a few Asian-American students and a white woman in her 30s who was married to a man of mixed race. Asked what struck them about Obama, they listed everything from his age and rearing by a single mother to the fact that he is biracial.

"There's something about the sophisticated and complex ethnic identity that resonates with younger voters as well," says Turner, who is black. "Younger people are able to say 'we' - and that 'we' includes Barack Obama."

But exit polls also show that young Hispanics were more likely to vote for Clinton, as Hispanics were in general. Many people believe the complicated racial history between blacks and Hispanics has played a role in that outcome.

Some wonder if the welcoming attitude toward a black president has its limits, even among the most racially open young Obama supporters.

Young Han, 25, said race played little role in his decision to vote for Obama in the Washington state caucuses. But he wonders if his peers would be uncomfortable if Obama were a different type of black candidate.

"A person who talks in a black English, engages in 'identity politics,' and comes out of a marching, yelling-out-of-a-megaphone background might be considered 'really' black, whereas a Harvard-educated lawyer who looks non-threatening may be just a guy who happens to be black," says Han, a Korean-American who recently worked for a Washington, D.C., civic education foundation teaching students about government. "Whether this is a valid way by which to judge someone's competence or legitimacy is whole other question. But I think that's how things work."

Like many others, he saw attempts to link Obama to his former pastor, the Rev. Jeremiah Wright, as a way to play on that dynamic.

Yet the Wright controversy did not seem to resonate much with young people, even at predominantly white, relatively conservative Clemson University, where political science professor Joseph Stewart Jr. monitored the reaction.

That is striking, says Stewart, a white Southerner who came of age during the civil rights movement. "I did not think I'd live long enough to see a black candidate who was taken this seriously," he says. "I thought racism was just too deeply ingrained."

He sees desegregation as "one of those subtle changes" that have influenced younger generations.

He also has found that many of the youngest voters have little sense of relatively recent incidents of racial strife - for example, the Los Angeles riots that followed the acquittal of the white police officers who beat Rodney King.

"So a lot of the acceptance and the lack of relevance of race is simply a lack of history," Stewart says. "We usually think that's a bad thing - but there may be some positives, too."

For Turner, the progress made is notable and moving.

At age 52, she has vivid memories of the assassination of the Rev. Martin Luther King Jr. So Obama's candidacy is a reminder of how far the nation has come.

"There have been times in the Obama campaign when I think, 'I wish Dad could've seen that' or 'I wish my mother were here' to just see him holding his own," Turner says of her parents, who are no longer living.

"They would have been proud."
By Martha Irvine