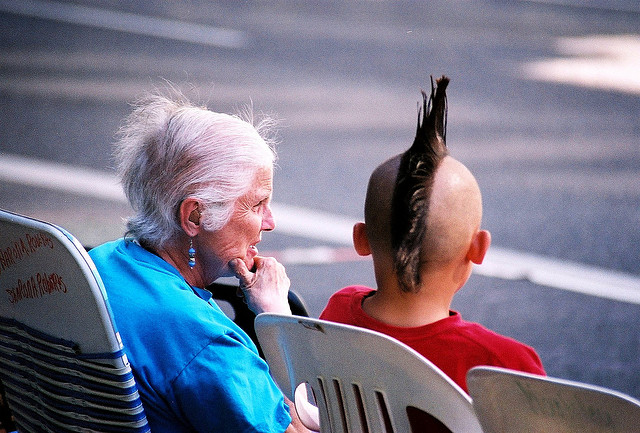 Rising inequality is a much discussed feature of the current economic landscape, and now a new report is adding a new dimension to the usual hand-wringing. The wealth gap, according to the Pew Research Center, is as much about age as it is about education or geography.

The lousy labor market, of course, plays a major role in this growing gap, according to the report, which blames:

Delayed entry into the labor market and delays in marriage -- two markers of adulthood traditionally linked to income growth and wealth accumulation. Today's young adults also start out in life more burdened by college loans than their same-aged peers were in past decades.

So what are we to make of the fact that younger folks are getting a smaller slice of the pie than they were a few decades ago? One obvious effect is a whole lot of anger and frustration. Business Insider claimed the central chart from the Pew report "shows exactly why American youth are angry." Support among Gen Y for the Occupy Wall Street protests against inequality is broad, as this generation graduates and discovers that the square deal of college followed by a decent job often isn't materializing.

But besides Gen Y anger, the report also raises the question of whether policy and spending is unduly skewed towards relatively well off older Americans. Clearly all age groups believe supporting low-income seniors is a must, but the San Francisco Chronicle asks why all seniors get discounts rather than other age groups:

Do seniors deserve all those discounts they get from airlines, restaurants, theaters, state and national parks, bus rides and so on?

It's true that many seniors are living on fixed incomes, but they also have had a lifetime to accumulate a nest egg and pay down a mortgage. I've often wondered why companies and governments don't offer discounts to parents trying to feed, clothe and educate a family, or young people struggling to make ends meet on an entry-level salary.

And the question of where to place scarce resources applies more broadly as well. As the government looks to cut the deficit and trim spending the powerful AARP is warning the debt reduction super committee to keep their scissors away from Social Security and Medicare, which benefit seniors. With older folks voting in droves (especially in politically important Florida), the group's message is most likely being heard loud and clear.

Guaranteeing older Americans a decent standard of living is highly desirable, but governments must balance the needs of this group against the needs of the young for things like decent schools, roads and bridges that won't collapse during their life times and a non-crushing federal debt burden. The young vote less and are far less politically organized, so looking at this new report out of Pew indicating this generation is falling behind economically, it's worth asking whether the priorities of younger Americans are being given short shrift. As Anatole Kaletsky has written in the Times of London:

The politics of the next decade will be dominated by a battle over public spending and taxes between the generations. Young people will realize that different categories of public spending are in direct conflict -- if they want more spending on schools, universities and environmental improvements they must vote for cuts in health and pensions. Schools and universities are more important for a society's future than pensions. Yet every democracy around the world has made the opposite judgment.