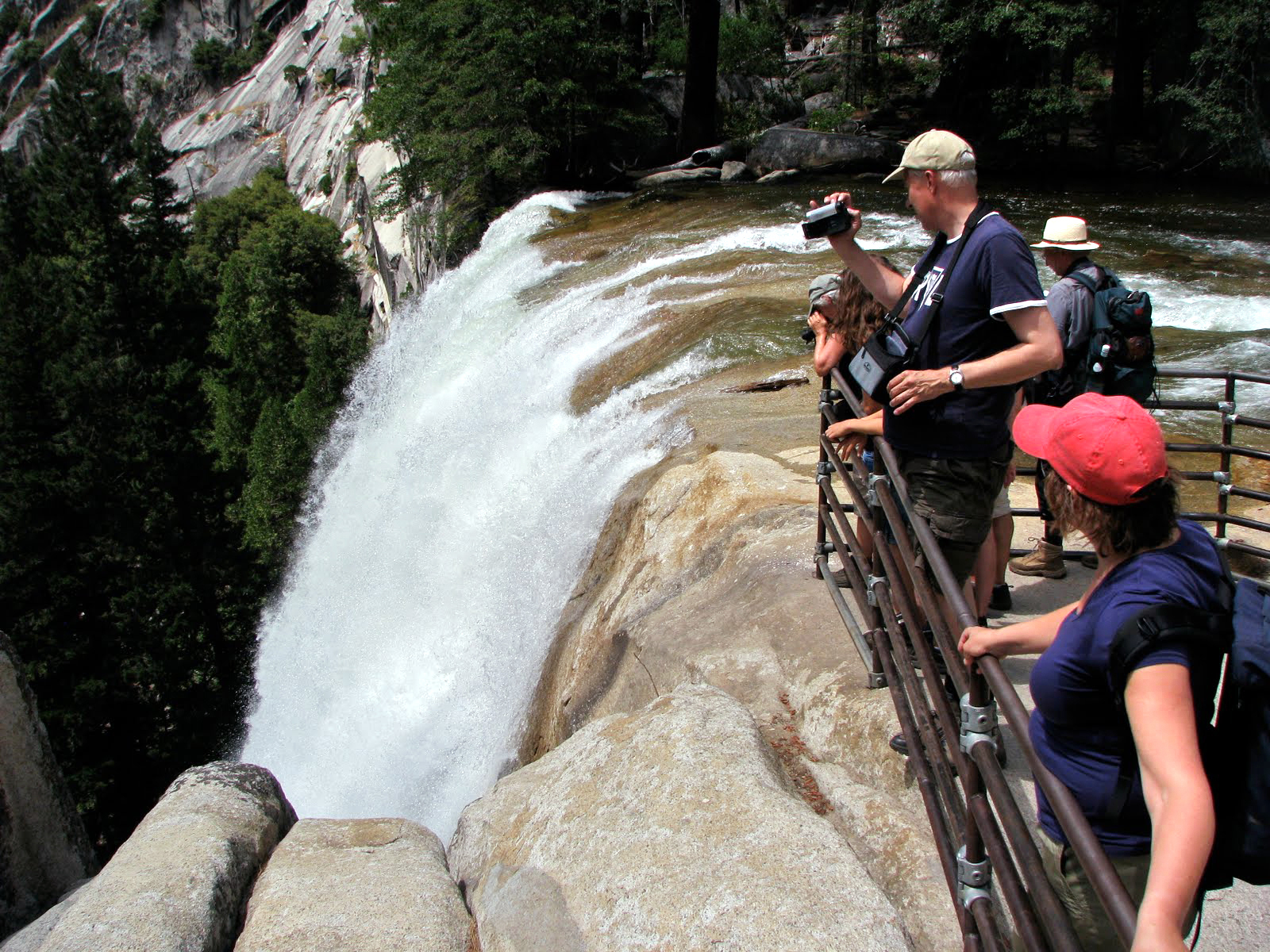 YOSEMITE NATIONAL PARK, Calif. - Friends are describing the three young people who were swept over a 317-foot waterfall in Yosemite National Park as church role models who normally did not take risks.

Members of St. George's Church in Ceres gathered for a prayer vigil Wednesday evening, grieving over the tragedy that occurred on a church group outing a day earlier.

The church pastor, Genard Lazar, was a part of the group of about a dozen hikers who ascended the steep Mist Trail to the top of Vernal Falls to pose for photographs.

Tanya Badal, the sister of victim Ramina Badal, saw her sister go over the falls. She declined to talk about what happened atop Vernal's precipice, but said that despite the passage of time she was still praying the three would be found alive.

"I still have hope," she said outside of the church.

Bishop Mar Awa Royel said he has been praying with the family for a quick recovery of the bodies, still missing after two days of searching.

On Wednesday Badal's parents, Tony and Virginia, supported each other as they walked sobbing into the church. When Virginia's knees buckled, Tony caught her.

"This will be a chance for us to re-educate our young people about how valuable life is," said Charmain Morad-Daniel, a member of the Assyrian National Council of Stanislaus County, as mourners packed the church

Friends said the victims likely did not understand that the swift-moving Merced River could be so treacherous.

Witnesses say the young tourists were trying to pose for a picture. Instead they burned a horrifying image into the memories of everyone who saw.

Badal, Homiz David, 22, of Modesto, and Ninos Yacoub, 27, of Turlock were swept to their deaths.

A man believed to be David crossed a metal barricade with Badal above the falls to make their way over slick granite to a rock in the middle of the swift Merced River.

Badal slipped and David reached in for her and fell in. Yacoub had been trying to take their photo, friends said, and he slipped in when he tried to save them.

Other hikers, including several children in their group, could only watch as the rushing water swept all three students over the edge.

"Everyone was screaming," witness Jake Bibee said. "People were praying."

A sign in English warns visitors not to cross the barricade or swim in the waters above the falls. Bibee said other hikers had shouted that it wasn't safe to go into the rushing river.

Dean Sabo, who witnessed the accident, told CBS affiliate KGPE Fresno: "I saw two that were holding each other and one that was floating alone through the water. And the reason that I looked was because this woman was screaming, running along the edge of the water."

The victims were part of a close-knit community of Assyrian Christians with roots in the Middle East who have been settling in California's Central Valley during the past century.

They were members of the St. George Church in Ceres. The church is part of the Assyrian Church of the East.

"It's very shocking to our community," said the Rev. Auchana Kanoun, who leads the parish.

Ninos Piro said outside the Mar Zaia Cathedral in Modesto that he was friends with all three victims, whom he knew from church.

David was studying music production at Modesto Junior College, Yacoub was studying chemistry at California State University, Stanislaus, and Badal attended the University of San Francisco and had hoped to become a nurse, friends said.

"They were honest, righteous Christians trying to live their lives the right way," said Piro, 36, of Turlock. "They were trying to be a good influence on everyone around them. That's why you see everyone so torn up around here."

The top of Vernal Fall is always treacherous, and is especially so this year because of the record snowmelt now under way. A metal barricade separates hikers from the river where it pools before crashing over the precipice.

On Wednesday afternoon, hundreds of tourists climbed the 1.5-mile Mist Trail to the top of Vernal Fall after the path was reopened.

Julie Ehrler of Modesto was on the trail with her mother-in-law but felt too uneasy to go all the way to the top of the falls. She called the loss of the three victims tragic.

"It makes you stop and think and not do silly things. I can understand they wanted to get close to it because it's a beautiful site. But you have to be respectful toward nature."

Bibee said other members of the victims' group also had been on the wrong side of the barricade when he reached the top of the Mist Trail. One man, he said, was posing near the waterfall with a screaming young girl in his arms while a teenage girl snapped photographs.

"People became unglued on this guy," Bibee said. "They said, `You know what man, get your ass back over here."'

As that man walked back, Bibee said, the doomed couple made their way to the rock.

Bibee, a 28-year-old country western musician who has hiked the Mist Trail many times, said that before the victims were swept away he had spent a good part of his hike explaining to his companion how dangerous the wilderness can be.

"People come up here and they think it's Disneyland," he said.

Witnesses called 911 immediately after the accident. The search and rescue unit closed the Mist Trail on Tuesday afternoon while searching for the bodies. The trail, used by 1,500 people a day, was reopened Wednesday as rescuers searched the banks of the river below the falls.

The victims' bodies may not be found until the river's waters, swollen by massive winter snows, recede later in the year, park spokeswoman Kari Cobb said.

The tragedy brings to six the number of people killed in water accidents in Yosemite this year. Two hikers drowned in the Hetch Hetchy Reservoir on June 29, and a hiker slipped and fell into the Merced River on the Mist Trail on May 13.

The deaths occurred in an especially dangerous year for visitors of mountainous areas in the West that experienced record winter snowfall that swelled rivers and streams when it melted.

Four family members died in Wyoming earlier in the week when a road collapsed and sent their car into a raging creek. In Utah, a 15-year-old girl died after heavy rains caused a huge sinkhole to open on a highway, swallowing a vehicle and causing her father's SUV to careen off the road.

Charmain Morad-Daniel said she knew Badal well through the victim's father and was acquainted with the men.

"I know three families that are really hurting," she said. "It's a tragedy for the Assyrian community because these are role models and they're active in youth activities through the church."

Gewargis Narso, a deacon at the church the three victims attended, described Badal as respectful, nice and responsible.

"I wouldn't have thought she would have taken a chance like that," he said.