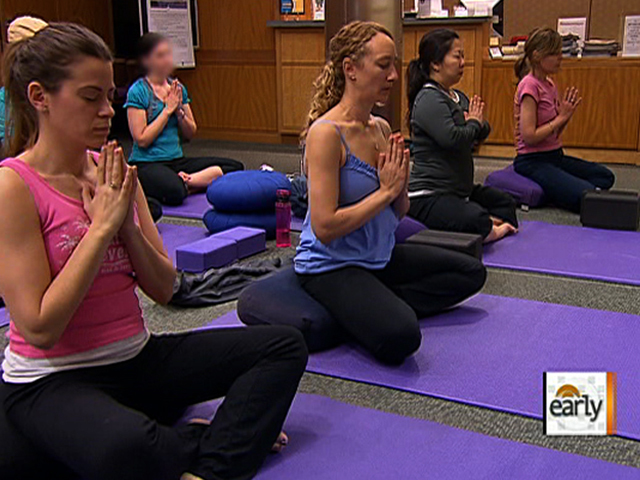 Women are turning to yoga to increase their chances of conceiving -- and some swear by the effects of the recent trend, saying the ancient art of yoga mixed with modern science helped them start their families.

On "The Early Show," CBS News Correspondent Michelle Miller reported on one woman's journey that led to yoga  -- and children -- when it seemed all paths had ended.

More than four million babies are born every year in the U.S. But, Miller said, it's not always easy to conceive.

Among American women, 7.3 million suffer from infertility. And though many options exist that can help couples conceive, their long paths to parenthood can be painful.

The Best Fence For Your Home

"Every time that you get the phone call that it was unsuccessful, a little part of you dies," she said. "When we got married, we thought we'd have three or four children and obviously it wasn't working out and I was crushed."

She told CBS News, "It so hard to not let your mind go to bad places, when you've been so unsuccessful for so long, but to try to keep you mind and body open to the fact that you will have a family. It's emotionally and physically draining."

Dougherty was about to give up, until one day at the NYU Fertility Center, she heard about a fertility yoga class that would change everything.

"If anyone had said support group to me, I would have said, 'no way.' I kept my pain very private," Dougherty said. "But fertility yoga, you went and it was a lot of like-minded people and you eventually end up sharing your stories off the mat. And it became a real support network."

For millennia, Miller noted the ancient practice of yoga has helped people worldwide balance mind and body. Today, for an hour every week, hopeful moms-to-be just like Dougherty use age-old focus to reduce modern stress.

Yoga instructor Tracy Toon Spencer at Fertile Life, Inc. in New York, said, "This yoga practice provides a community, a place where women can gather and take inspiration from one another. ... They feel much less isolated so they feel better and they're more relaxed."

That relaxation may be just what the doctor ordered. NYU fertility specialist, Dr. Frederick Licciardi, said he believes that adding yoga's timeworn wisdom to the modern medicine he prescribes is valuable for patients.

Licciardi said, "Being in a yoga class with other women who are undergoing the same stressful things that you're undergoing, the time in the office, the drugs, the cost, really can help a person be grounded and relieve a lot of her stress."

Relieving stress is yoga's key, making a difficult physical process, easier on the soul, Miller said. Mind-body programs designed to reduce stress have reported fertility increases up to 35 percent, regardless of the patients' histories.

But nothing can prepare you for that phone call.

Dougherty said, "(The nurse) said, 'congratulations.' And I just started hysterically crying and my husband ran up the stairs and he was crying and it was just the best moment of my life. ... I hung up the phone on the nurse and I had to call her back the next day and say, 'What, what do I do next, like what am I supposed to do.'"

For Dougherty, after eight years and now two pregnancies, the proof is in the playroom.

Dougherty said, "Honestly, I don't think I'd have my family, if I hadn't met Tracy at NYU."

On "The Early Show," CBS News Medical Correspondent Dr. Jennifer Ashton, herself an OB/GYN, said the mind-body connection yoga may offer is powerful.

She said, "I recommend absolutely anything that the patient can do to be more pro-active in her care, as long as there are no risks, no downsides, especially when you're talking about adding to the more conventional treatments. And again, risk (versus) benefits, potentially high benefit, low risk. There's no reason not to recommend it."

The impact on a woman's stress level, Ashton explained, can affect a woman's ability to conceive.

"We know that stress in your brain releases a chemical neurotransmitter called dopamine, and dopamine can absolutely have impacts on your fertility," she said. "Stress, in general, can trigger a whole inflammation pathway in our bodies. So anything you can do to minimize stress is always going to be good."

Yoga and other complementary therapies, Ashton said, have been shown to have a variety of medical and physical effects, such as reducing pain, lowering blood pressure and improving sleep.

"The list just seems to be growing and growing, the more we study these forms of treatment," Ashton said. "The more people engage in them, the more we're finding that it does absolutely more good than harm."

Meditation, as well as yoga can be beneficial, Ashton said.

"We're talking about anything that will strengthen that mind-body connection," she explained. "So it might be deep breathing. It might be guided imagery. It might be any type of those activities -- even something like acupuncture, which obviously you can't do yourself, but focuses in on that mind-body connection, and in terms of how it works, we're really just starting to chip away at the understanding of that."

Ashton continued, "Research is ongoing. But they have done studies where they use a special type of MRI to look at brain activity, in patients who are undergoing meditation. And they have actually shown that multiple areas in the brain -- not just one area -- but multiple areas in the brain that are involved in how we process or perceive pain are activated when people undergo meditation. And in some cases, that can have a better effect than the drug morphine on pain perception. So, again, if that's what we're seeing with meditation and the brain -- the other effects, and mechanisms there, are really just pretty significant."

Though there really doesn't seem to be any downside, Ashton still recommends considering the risks versus the benefits and talking with your doctor before starting any kind of health program.

"If you are undergoing aggressive medical therapy for something like cancer or chronic illness, you obviously always want to talk to your health care provider about adding complementary therapies like yoga or meditation," she said. "You never want to discontinue the standard medical therapies in lieu of something like meditation. But to add it to your regimen, absolutely, it can be so important, and again, we're going to be hearing a lot more about this in the future."