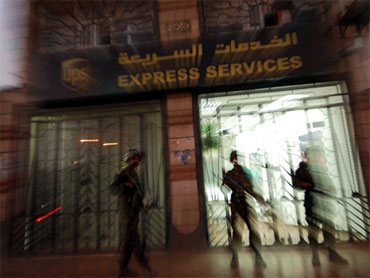 A mail bomb intercepted last month at an English airport could have exploded over the East Coast of the United States, British police said Wednesday.

New details British police released Wednesday also suggest they might have disarmed the bomb accidentally rather than by design.

Forensic evidence showed the device, originally sent from Yemen by way of Cologne, Germany, was timed to be detonated about six to seven hours after the cargo aircraft carrying it left the U.K. for the U.S. The package was removed by police in Britain during transit.

"If the device had not been removed from the aircraft, the activation could have occurred over the eastern seaboard of the U.S.," police said in a statement.

Officials believe al Qaeda in the Arabian Peninsula sent three dummy packages in September, from Yemen to Chicago, to gauge delivery logistics and may have used that information to carry out this attack, CBS News Correspondent Bob Orr reports.

In a statement, Scotland Yard said explosives officers "disrupted" the explosive device during their initial examination when they took the printer cartridge - in which the bomb was hidden - out of a printer.

Authorities on both sides of the Atlantic have said they only narrowly thwarted last month's plot, in which terrorists in Yemen hid two powerful bombs inside printers and shipped them aboard cargo planes to addresses in Chicago. The printer cartridges were filled with PETN, an industrial explosive that, when X-rayed, could resemble the cartridges' ink powder.

The exact aim of the attack remains unclear, but a senior U.S. official has said that evidence pointed to a plot to blow up cargo planes inside the U.S. - either on runways or over American cities. In Washington, the White House said the British finding showed how serious the attack was.

Al Qaeda in the Arabian Peninsula would not likely have known if the packages, mailed in Yemen, would ultimately end up on U.S.-bound cargo planes or passenger jets, CBS News National Security Analyst Juan Zarate reports. But, terror experts say, an explosion, even in a cargo plane, over the U.S. mainland would be a devastating psychological blow.

"The mere potential that a device would go off in an aircraft over U.S. airspace I think is incredibly dangerous and something al Qaeda in the Arabian Peninsula would have welcomed," Zarate said.

But the new account raises questions about what exactly happened during the first confusing hours when authorities, alerted by intelligence, searched for the bombs.

On that day, British police initially said they found no explosives in the package that was shipped from Yemen by way of Cologne, Germany, and intercepted at central England's East Midlands Airport. They then lifted a security cordon around the cargo depot building where the package had been examined.

But hours later they put up the cordon again to look further for explosives when it emerged that a second mail bomb had been found in a cargo that had landed in Dubai.

But in Wednesday's statement, police said they "disrupted" the bomb at about 0640GMT (2:40 a.m. EDT) on Oct. 29 - before they announced that they had found no explosives. They also said Wednesday that, had the cartridge not been removed, the bomb would have gone off at 0930GMT (5:30 a.m. EDT).

Although British police said Wednesday that the bomb could have exploded over the eastern seaboard of the U.S., flight data tracking the flight showed that it was in Canadian airspace when authorities said it was timed to detonate. Data from Houston-based Flightaware showed that, at 5:30 a.m. EDT, UPS Flight 232 from East Midlands to Philadelphia was about 160 miles northwest of Quebec City.

In Washington, White House spokesman Nicholas Shapiro said: "We greatly appreciate the highly professional nature of the U.K. investigation and the spirit of partnership with which U.K. authorities have pursued this matter."

He praised the efforts of intelligence and law enforcement professionals in the U.K., the UAE, Saudi Arabia and the United States, and said they would continue to work together "to address and counter the threat posed by al Qaeda in the Arabian Peninsula."

The Yemen-based al Qaeda in the Arabian Peninsula has claimed responsibility for the bombs and has vowed to send more explosives-packed parcels.