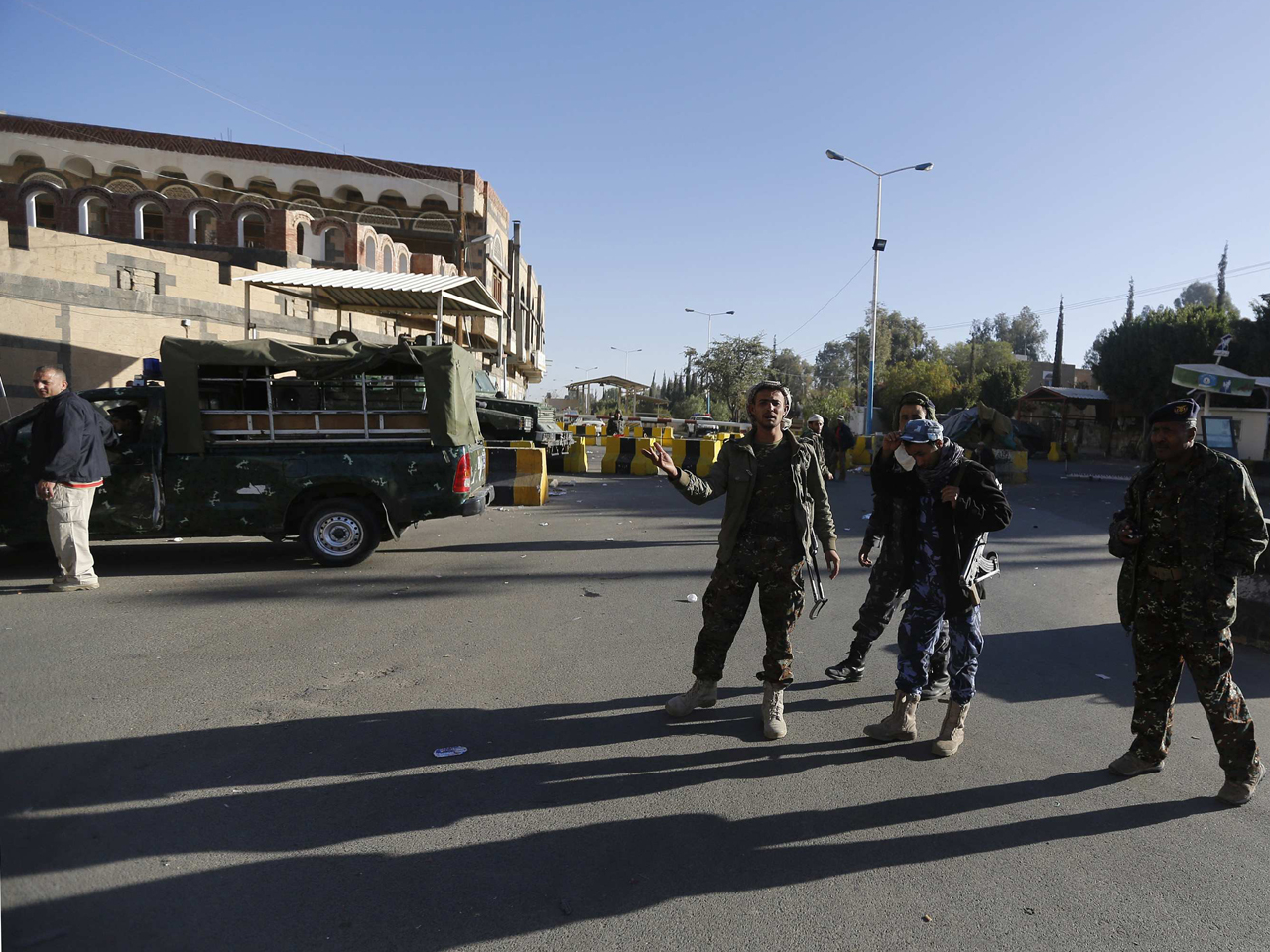 SANAA, Yemen -- The United States, Britain and France moved to close their embassies in Yemen on Wednesday, increasing the isolation of Shiite rebels who have seized power. In a show of bravado against the Americans, the rebels seized the cars of U.S. diplomats left at the airport on the way out.

At the same time, the rebels - known as the Houthis - attacked demonstrators holding protests against their power grab in various parts of the capital, Sanaa, witnesses said. The fighters beat protesters and stabbed them with knives, arrested more than a dozen.

The increasing turmoil comes almost four years to the day since the start of Yemen's 2011 Arab Spring uprising that ousted the longtime autocratic ruler but then opened a political transition that crumbled between the country's grinding forces of tribal politics, sectarian divisions, al-Qaida militancy and succession movements.

The crisis reached a new peak when the Houthis - widely believed to have Iranian support - overran the capital Sanaa late last year. They have since taken over larger parts of the country. In January, the rebels put U.S.-backed President Abed Rabbo Mansour Hadi and all his Cabinet ministers under house arrest, leading to their resignations. Subsequently, the Houthis, who are followers of the Shiite Zaydi sect in the Sunni-majority Yemen, dissolved parliament and declared they were taking over the government.

The United Nations has been trying to broker talks between the Houthis and others in Yemen since the Shiite rebels dissolved parliament after earlier besieging the country's president, who later resigned while armed militants surrounded his home.

The embassy closures were a signal that world powers see little chance the rebels' advances will roll back soon.

On Tuesday, the State Department announced it suspended operations at the U.S. Embassy in Sanaa and relocated remaining diplomatic personnel "due to the ongoing political instability and the uncertain security situation." The embassy had been operating with only a skeleton staff for some weeks amid deteriorating conditions.

More than 25 vehicles abandoned by departing American embassy staffers at Sanaa airport were seized by the rebels, according to airport officials. The rebels also took weapons that were left in the vehicles, the officials said, speaking on condition of anonymity because they were not authorized to speak to the press.

The embassy's Marine detachment, which escorted the cars, left their personal sidearms behind since they would be unable to take them on the commercial flights they were leaving on, Pentagon spokesman Col. Steve Warren told reporters in Washington. They destroyed their heavier weapons - automatic weapons and machine guns - before leaving the embassy, he said.

Yemeni officials said Wednesday that embassy staffers also destroyed files before leaving and handed over Sanaa's Sheraton Hotel, where they resided, to the United Nations.

U.S. officials said the embassy's closure would not affect counterterrorism operations against al-Qaida's Yemen branch, known as al Qaeda in the Arabian Peninsula, or AQAP. Yemeni officials, however, say the move was likely to curtail U.S. military operations in the country. Washington has long considered the Yemeni branch to be the world's most dangerous offshoot of the global terror group, and it claimed to be behind last month's attack on the French satirical magazine Charlie Hebdo.

Also Wednesday, Britain's Minister for the Middle East Tobias Ellwood urged British citizens still in Yemen to "leave immediately" as his country's embassy evacuated its staff. The French Embassy said it would close on Friday.

The diplomatic missions of many Gulf Arab countries, which backed Hadi and opposed the Houthis, have already evacuated their staff.

In Sanaa, the Houthis patrolled the streets armed with Kalashnikov rifles and dressed in a mix of police uniforms and civilian clothes. They sealed off main boulevards and drove around in pickup trucks mounted with anti-aircraft guns. Shops closed early and people mostly stayed home.

The rebels violently dispersed several scattered anti-Houthi protests, beating the demonstrators and stabbing them with knives as they tried to march toward the U.N. offices, according to witnesses. At least 14 were arrested including four top members of the Sunni Islamist party Islah, a rival to Houthis, the party said.

The Yemeni officials and witnesses spoke to The Associated Press on condition of anonymity because they were not authorized to talk to media.

Later Wednesday, thousands of Houthi supporters marched in Sanaa, chanting, "Death to America, Death to Israel" - echoing similar slogans from Iran's 1979 Islamic Revolution. The Houthis, traditionally based in northern Yemen along the border with Saudi Arabia, deny they are backed by the Shiite powerhouse Iran.

CBS News terrorism analyst Jere Van Dyk, who spent much of 2014 in Yemen, notes that this week's embassy closure is not the first instance; most notably, the facility was shut in August 2013, after the NSA apparently intercepted a telephone conversation between the al Qaeda leader in Pakistan and AQAP's leader in Yemen. The U.S. closed 22 embassies and consulates in the region on that occasion, and nothing happened.

This time, Van Dyk says it has nothing to do with AQAP, per se, but rather because of the Houthis' takeover of Sanaa, the resulting "sense of uncertainty, danger and chaos," and rumors that they have surrounded the embassy compound.

A former senior Yemeni security official, now in exile, told Van Dyk just a few days ago that the capital city had become dangerous and chaotic because no one appears to be in charge.

The Houthis have taken over, but as another former Yemeni official -- a Houthi himself -- told CBS News last week, they are "committing suicide." The Houthis are Shiite Muslims in a Sunni Muslim-dominated country. They have many enemies in the government and do not have the firepower of the Yemeni Army, explains Van Dyk.

On Tuesday, the rebels' leader, Abdel-Malek al-Houthi, warned critics not to stand in the way of his movement and denounced foreign governments for removing their diplomats.

"Whoever harms the interest of this country could see that their interests in this country are also harmed," al-Houthi said, speaking on the rebels' Al-Masirah TV network.

Away from Sanaa, the Houthis pressed on with their power grab after taking control the previous day of the central province of Bayda, a gateway to the south. The Houthis now control 10 out of 22 provinces in Yemen.

The Houthis have also been fighting AQAP and Sunni tribes allied to it. In addition, the Houthis have yet to take the oil-rich eastern Maarib province, where some tribes are fiercely against the rebels.

Thousands flocked to the streets in Yemen's third largest city, Taiz, to denounce the rebels. The southwestern city remains out of Houthi control.

The rise of the Houthis began last year when they descended from their heartland in northern Saada province, fighting their way toward the capital and defeating tribal and military rivals along the way. In September, they flooded into Sanaa. They won the backing of ousted President Ali Abdullah Saleh - who is himself a Shiite Zaydi but who as president fought repeated wars against the Houthis. His loyalists in the military are suspected of enabling the Houthis' advances.