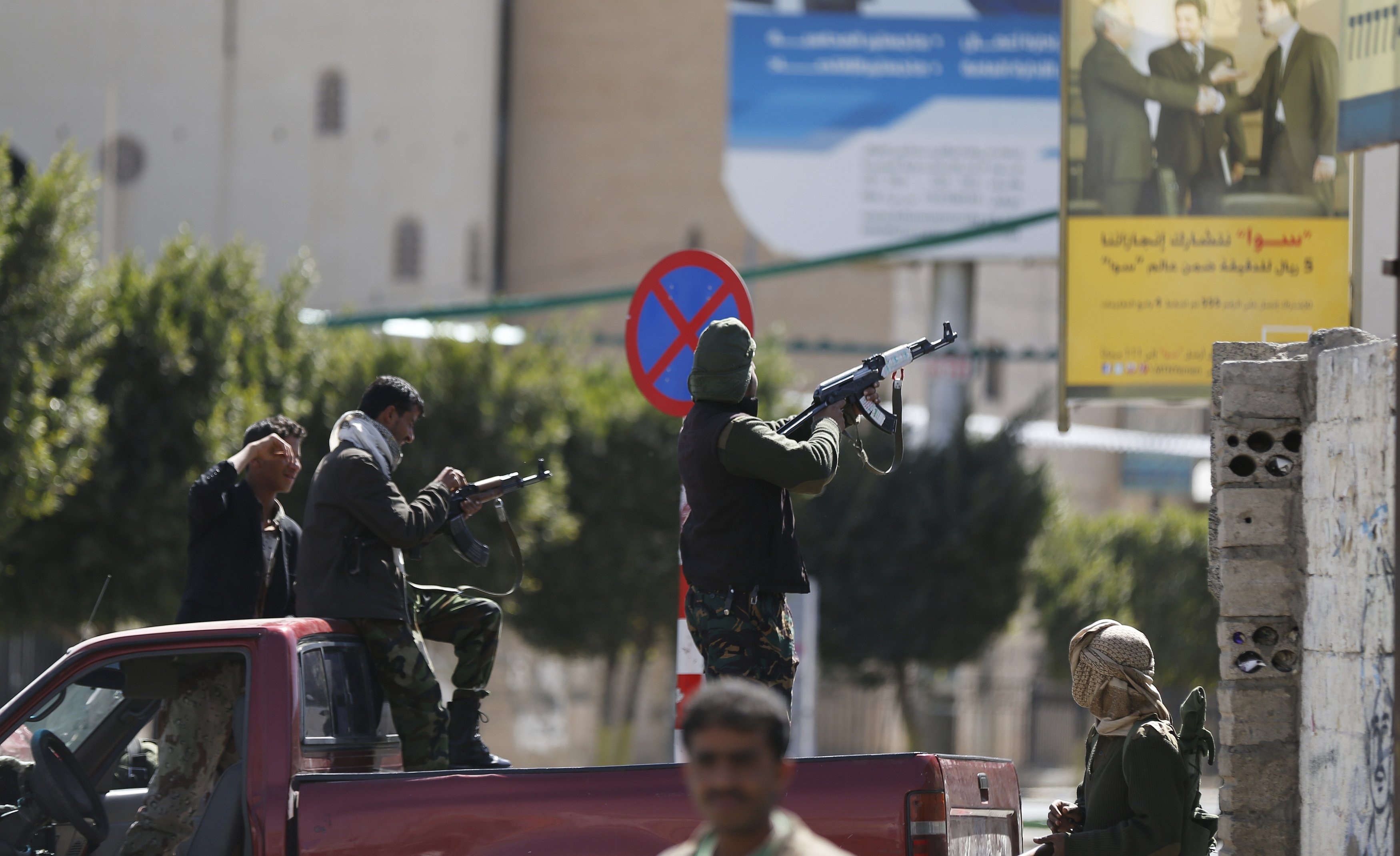 SANAA, Yemen -- A cease-fire halted intense clashes near the presidential palace in Yemen's capital Sanaa on Monday after Shiite rebels seized control of state-run media in a move that one official called "a step toward a coup."

The fighting, centered on the palace and a military area south of it, marked the biggest challenge yet to President Abed Rabbo Mansour Hadi by the rebels, known as Houthis, who swept down from their northern strongholds last year and captured the capital in September.

The violence has plunged the Arab world's poorest country further into chaos and could complicate U.S. efforts to battle al Qaeda's Yemeni affiliate, which claimed responsibility for the attack on a Paris satirical magazine this month and which Washington has long viewed as the global network's most dangerous branch.

The Houthis are seen by their critics as a proxy of Shiite Iran -- charges they deny -- and are believed to be allied with former President Ali Abdullah Saleh, ousted in a 2012 deal after Arab Spring protests. They have vowed to eradicate al Qaeda and have battled the group, but are also hostile to the U.S. Their official slogan is "Death to Israel. Death to America."

A State Department spokesperson told CBS News correspondent Margaret Brennan that the U.S. is monitoring the situation closely and "will calibrate the embassy security posture accordingly." There has been no order to evacuate the U.S. embassy.

A Yemeni official told Brennan that Houthi militias are surrounding the prime minister's home and are stationed along rooftops of the neighboring buildings.

The Houthis and forces loyal to Hadi have been in a tense standoff for months in the capital and the two sides traded blame for the outbreak of violence early Monday. Witnesses said heavy machine gun fire could be heard as artillery shells struck around the presidential palace. Civilians in the area fled as columns of black smoke rose over the palace and sirens wailed throughout the city.

Hadi doesn't live at the palace, and extra soldiers and tanks deployed around his private residence, which is nearby.

"This is a step toward a coup and it is targeting the state's legitimacy," Sakkaf told The Associated Press.

At least three people killed, a medical official said on condition of anonymity because he wasn't authorized to speak to journalists. The health ministry said more than 50 were wounded.

Yemeni activist Hisham Al-Omeisy, who lives near the presidential palace, said the fighting began after 6 a.m. (0300 GMT, 10 p.m. EST) with a shell hitting a hill controlled by the Houthis. They responded with heavy artillery fire, he said.

He later saw two bodies in civilian clothes just outside his house. He said he couldn't tell if the dead were civilians or Houthis, who do not wear uniforms.

Later, "I thought it was all quiet and I left my house. But a shell landed right near me," he told the AP Monday afternoon.

The cease-fire was negotiated by a presidential committee that included the interior and defense ministers, a presidential aide and a tribal sheik close to the Houthis. It came after witnesses said the rebels had seized control of the hills overlooking the palace and the military camp south of it.

Khaled al-Radhi, a 35-year old private military contractor whose house overlooks the hills, said after hours of intense shelling, the Houthis seized control of the two hills known as al-Nahdain. The hills overlook the military camps and the palace.

"This cease-fire came late. The group took control of the area," al-Radhi told the AP. There was no official comment on the report.

The latest spasm of violence appears to be linked to the Houthis' rejection of a draft constitution that would divide the country into six federal regions. On Saturday, the Houthis kidnapped one of Hadi's top aides to disrupt a meeting on the charter.

On Sunday Hadi chaired a meeting in which he demanded the army defend Sanaa, SABA reported. It wasn't clear whether Hadi, who has made similar calls in the past, was ordering the security services to take back control of the capital.

Hadi and the Houthis accuse each other of failing to implement a U.N.- brokered peace deal calling for Hadi to form a new national unity government and reform government agencies and for the Houthis to withdraw their fighters from cities. The Houthis have also demanded integration of their militiamen into Yemen's security forces, something Hadi strongly opposes.

"The two sides have hit a dead end," said al-Omeisy, the activist. "Everyone is strong-headed and everyone has their finger on the trigger. It was only a matter of time."

The prolonged power struggle has undermined Yemen's ability to battle al Qaeda in the Arabian Peninsula, and the Houthis' push into predominantly Sunni areas has boosted local support for the terror group.

"The Houthis are already ruling. Them seizing power is 1,000 percent in our interest for many reasons," an al Qaeda member told the AP on condition of anonymity because he was not authorized to speak to the media.

The al Qaeda affiliate, known as al Qaeda in the Arabian Peninsula (AQAP), claimed to have orchestrated the attack on the office of French magazine Charlie Hebdo, in which two French Islamic extremists killed 12 people, saying it had carried out the assault as "revenge" for cartoons of the Prophet Muhammad that were widely seen as offensive.

Many Western intelligence analysts had warned, even before the group claimed responsibility for the massacre at Charlie Hebdo's office, that AQAP, al Qaeda's Yemen-based branch, represented the most immediate threat to Europe and the United States.

In December last year, an American photojournalist and a South African teacher were both killed during a raid by U.S. troops to try and free the men from AQAP captivity.

The group has been linked to a number of failed terror attacks on the U.S. homeland, including the attempt to down a U.S.-bound airliner in 2009 using explosives hidden in a man's underwear and a plot the following year to ship bombs concealed in printer cartridges to the U.S. on cargo planes from the Gulf.

The U.S. has provided extensive counterterrorism training and support to Yemeni forces and has targeted al Qaeda with a series of drone strikes in recent years, which have taken out several senior militants but also killed civilians, stoking popular anger.

Hadi was elected president in 2012 after a popular revolt toppled Saleh. Saleh and the Houthis are Zaydis, a Shiite branch that is close to Sunni Islam. Zaydis make up around a third of Yemen's population.

Saleh waged six-year-war against Houthis that ended in a cease-fire in 2010. Now, however, the old foes appear to have joined forces to challenge traditional power brokers, including top generals, tribal alliances and the Islamist Islah party, the Muslim Brotherhood's branch in the country.

The U.N. Security Council last year put Saleh on a sanctions list, along with two Shiite leaders, for destabilizing the country. Saleh's representatives have denied the allegations.