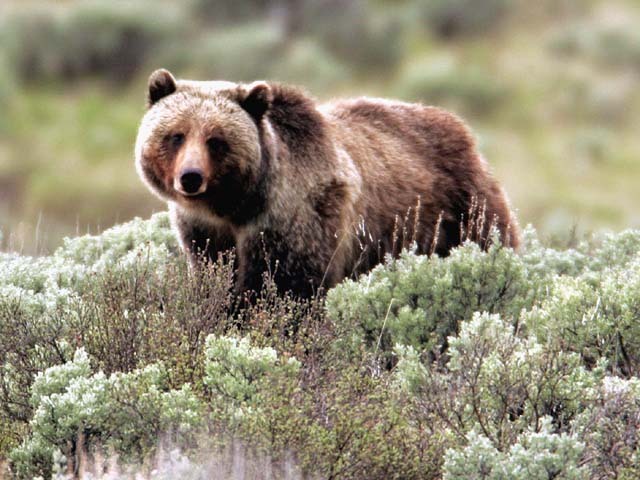 YELLOWSTONE NATIONAL PARK, Wyoming - Yellowstone National Park authorities will not try to capture a female grizzly that killed a backcountry hiker because the bruin was trying to defend its cubs when it was surprised by the man, a spokesman said Thursday.

The mauling of Brian Matayoshi, 57, was a purely defensive act, park spokesman Al Nash said. He added that Yellowstone typically does not try to capture or remove a bear in what he called "a wildlife incident."

It was the first fatal grizzly attack inside the park in 25 years — but the third in the Yellowstone region in just over a year.

The attack occurred on Wednesday about 1-1/2 miles (2 kilometers) up a popular backcountry trail and not far from an area that is one of the park's top attractions. Busloads of tourists normally gather there to take in the view from iconic Artist Point.

A stunning waterfall drops hundreds of feet in the Grand Canyon of the Yellowstone, and trails along both canyon rims are normally crawling with tourists. Authorities closed the area but planned to reopen it in a few days, Nash said.

Matayoshi's wife, Marilyn, escaped serious injury and no longer was at Yellowstone, park officials said. They declined to reveal her whereabouts.

Nash said the couple saw the bear twice on their hike.

The first time, they continued hiking. The second time, the grizzly charged them and Matayoshi told his wife to run. She called police on her cell phone, and other hikers in the area responded to her cries for help.

The woman told park officials she didn't see the bear attack her husband. When the bear went for her, Nash said, she dropped to the ground. The grizzly lifted her off the ground and then dropped her.

Marilyn Matayoshi may have had scrapes and bruises but didn't seek medical attention. Her husband died at the scene, Nash said. "We observed both bite marks and claw marks," he said.

In this case, Nash said, park officials relied on Marilyn Matayoshi's account of the attack in deciding not to pursue the grizzly. She told rescuers that the couple surprised the sow with her cubs — one of the most dangerous situations possible for humans encountering grizzlies.

Based on her account and understanding of grizzly behavior, rangers believe the bear instinctively charged to protect her young. The bear had never been documented before, never been tagged, and there was no reason to believe it had interacted with humans before, Nash said.

If so, the decision may very well have been different, he said.

"All indications are that this was a defensive attack," Nash said.

Nash said there is no way to definitely know what the bear was thinking or reacting to. He said the couple were day hikers and that it wasn't known if they were carrying bear spray, pressurized hot-pepper residue in a can that is effective in stopping aggressive bears.

The decision not to track and kill the bear isn't unprecedented.

In nearby Grand Teton National Park, officials decided not to intervene with a grizzly that wounded a man there in 2007.

Rangers determined that female was defending its cubs and didn't pose a general threat to humans. That attack was considered natural behavior and officials didn't believe the bear was any more dangerous than any other sow grizzly in the region.

This summer, the same bear and her cubs have drawn crowds of tourists to roadsides in the park.

Yellowstone and surrounding areas are home to at least 600 grizzlies — and some say more than 1,000. Once rare to behold, grizzlies have become an almost routine cause of curious tourists lining up at Yellowstone's roadsides at the height of summer season.

While lamenting the death, officials said they didn't want to overemphasize the danger to visitors.

"This is a wild and natural park," said Diane Shober, director of the state Wyoming Travel and Tourism agency. "At the same time, the likelihood of this happening again is small."

It was the park's first fatal grizzly mauling since 1986, but the third in the Yellowstone region in just over a year amid ever-growing numbers of grizzlies and tourists roaming the same wild landscape of scalding-hot geysers and sweeping mountain vistas.

Tourists have been flooding into Yellowstone in record numbers: 3.6 million last year, up 10 percent from 2009's 3.3 million, also a record.

In June 2010, a grizzly just released after being tranquilized for study killed a man hiking outside Yellowstone's east gate. Last July, a grizzly killed a Michigan man and injured two others in a nighttime campground rampage northeast of the park.

Grizzlies are an omnivorous species with a diet of berries, elk, fish, moths, ants and even pine nuts. In 2009, a federal judge restored threatened species protections for Yellowstone grizzlies, citing beetle-caused declines in the numbers of whitebark pine trees in the region. The protections had been lifted in 2007.

Officials routinely urge visitors to take precautions: Stay on designated trails, carry bear spray, hike in groups of three or more, and make noise in places where a grizzly could be lurking.