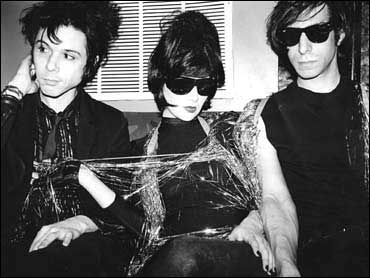 New York art-punk band Yeah Yeah Yeahs will release a new EP this summer. Entitled "Is Is," the five-song set is the band's first EP since 2002's "Machine," and the follow-up to last year's album, "Show Your Bones."

The songs that make up YYY's latest effort were written in the midst of touring for their breakthrough debut, "Fever To Tell." Producer Nick Launay, whose credits include Taking Heads, Public Image Ltd. and Silverchair, was chosen by the band to helm the new EP.

"(He) was the natural choice having produced PIL('s) 'Flowers of Romance,' collectively a favorite between us," YYY's lead singer Karen O says.

Though songs "Down Boy," "Rockers to Swallow" and "10x10" appeared on the band's live DVD, "Tell Me What Rockers To Swallow," this will be the first time the actual recordings are released. The remaining two songs, "Kiss Kiss" and "Isis," remain unreleased on any format.

Accompanying the EP's songs, the band will include a special live film, chronicling two late-night shows played at Grasslands Gallery in Brooklyn on May 7. The enhanced section will also include a live video for "Down Boy," as well as a video for the recorded version.

YYY's label, Interscope, will release "Is Is" July 23 on CD, double 7-inch vinyl, digital download and as a special USB stick.
By Eric D'Orazio