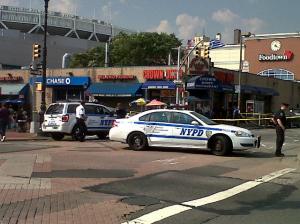 Dressed in a suit and a straw hat, Coleman reportedly shot a 41-year-old man multiple times, and a 60-year-old man once before dropping his gun and putting his hands up.

Police say that the incident happened right outside the door of the Crown Diner, just blocks from Yankee Stadium. Two witnesses, Patricia Perez and Anne Davis, were eating lunch in the diner when the shooting happened.

"Everyone was having lunch and all of a sudden we heard like four pops - pop pop pop - and everyone started running," Perez said.

Peter Katsihtis, another witness, said that one of his customers had just left the diner before getting caught in the crossfire.

"He was telling me 'Help me! Help me! I can't breathe!' and I noticed he was shot, a lot of blood on his body," Katsihtis said.

Coleman was quickly arrested by court officers who were in the area on their lunch break.

The family of Horace Coleman visited the precinct where he was being held and told police that the ordained minister must have been pushed to the edge for him to use a weapon.

Coleman's cousin, Mickey Bentson said, "He doesn't curse. He doesn't fight. He doesn't get in confrontations. It had to be him protecting himself in order to get out of that situation."

The shooting victims were both transported to Lincoln hospital. The 60-year-old was shot in the torso and the  41-year-old man is in critical condition.