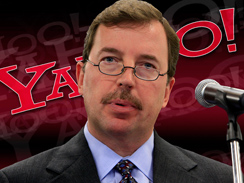 (AP) SAN FRANCISCO — Scott Thompson's reign as CEO of Yahoo Inc. (YHOO) is in jeopardy after just four months on the job because he allowed an inaccuracy about his academic credentials to recur for years.

A major Yahoo shareholder who exposed the fabrication is now leading the charge to oust Thompson for unethical conduct. In a letter Friday, activist hedge fund manager Daniel Loeb demanded that the board of the struggling Internet company fire Thompson by noon EDT Monday or face possible legal action.

"CEO's have been terminated for less at other companies," wrote Loeb, who controls a 5.8 percent stake in Yahoo through his hedge fund, Third Point LLC.

Yahoo reiterated Friday that "the board is reviewing this matter and, upon completion of its review, will make an appropriate disclosure to shareholders."

Thompson's troubles revolve around an exaggeration about his education at Stonehill College, a small Catholic school near Boston where he was graduated in 1979.

Since announcing Thompson's hiring in January, Yahoo had included two bachelor's degrees - one for accounting and the other for computer science - on the executive's biography. The dual degrees appeared on Yahoo's own website and in an April 27 legal document filed with the Securities and Exchange Commission.

After being confronted Thursday by Loeb, Yahoo confirmed that Thompson received only an accounting degree from Stonehill. Yahoo has since removed all references to Thompson's education from his bio on its website. The company hadn't amended its SEC filing with the inaccuracy as of late Friday.

It's unclear whether the inaccuracy about the computer science originated with Thompson or someone else at Yahoo.

But Thompson's bio with dual degrees periodically cropped up before he joined Yahoo. He was listed with a computer degree on a website touting his appearance at the Web 2.0 technology conference in 2010 while he was running eBay Inc.'s PayPal payment service. The computer science degree also has appeared in Thompson's bio in connection with his 2008 appointment to a Silicon Valley startup, Zuora.

EBay listed only Thompson's accounting degree in its SEC filings while he was working at PayPal.

Even if Thompson didn't personally write his biography, he almost certainly reviewed the information at some point and should be held accountable for the distortion, said Charles Elson, director of the John L. Weinberg Center for Corporate Governance at the University of Delaware.

Elson believes Yahoo's board needs to dump Thompson or "it will face questions about its own effectiveness."

Yahoo blamed an "inadvertent error." After that excuse was ridiculed on the Internet, Yahoo issued another statement late Thursday about the board's intent to look into what happened. The company, which is based in Sunnyvale, Calif., didn't give a deadline.

The uproar over Thompson's qualifications and integrity is the latest tempest at beleaguered Yahoo, which has been reeling since it turned down an opportunity to sell itself to Microsoft Corp. for $33 per share four years ago.

The company has been losing ground to rivals Google Inc. and Facebook Inc. ever since, causing its revenue to steadily fall and leaving its stock price below $20 since September 2008, a few months after Microsoft's final offer. Yahoo's shares fell 25 cents to close at $15.15 Friday.

Thompson, Yahoo's fourth full-time CEO in the past five years, had just started to revamp the company, but he probably won't be around much longer, predicted Kirk Hanson, executive director for the Markkula Center for Applied Ethics at Santa Clara University in Silicon Valley.

"The board really is boxed into a corner," Hanson said. "If this individual is prone to exaggeration or excessive claims, they have to be worried it might happen again down the road.

"They also have to ask themselves, `Can this leader serve as a moral example or moral leader for our company?' Behavior rolls downhill. If the CEO exaggerates a little, then others in the organization will exaggerate a lot."

Although he was well-respected at PayPal, Thompson isn't getting much support in Silicon Valley.

Thompson alienated much of the technology industry in March when he decided to sue Facebook for alleged infringement on some of Yahoo's Internet patents. The lawsuit has been skewered in Silicon Valley as a cheap shot at Facebook Inc. as it prepared to complete an initial public offering of stock that is aiming to raise as much as $13.6 billion for the company and its current shareholders. Yahoo critics also viewed the lawsuit as the desperate act of a company that has run out of good ideas.

In his Friday letter, Loeb argued that Thompson has to be dumped to avoid "irreparable damage to Yahoo's culture." He argued that Yahoo's own code of ethics justifies firing Thompson "for cause," a move that probably would prevent him for qualifying for a severance package. Yahoo's code states that information filed with the SEC "must be full, fair, accurate, timely and understandable."

If Yahoo fires Thompson, it will be the company's second ouster of a CEO in less than a year. The company fired Thompson's predecessor, Carol Bartz in September after concluding her turnaround strategy wasn't working.

Thompson so far has been focused on cutting costs. Just last month, Thompson laid off 2,000 Yahoo employees, or 14 percent of the workforce, in the company's biggest payroll purge in history. He has also promised to close or sell about 50 Yahoo services that haven't been attracting enough online traffic or generating enough revenue.

Loeb is trying to oust Thompson as he seeks four seats on Yahoo's board of directors - one for himself and three for his allies. Yahoo instead added three other directors in late March. Thompson told Loeb he wasn't qualified to be on the company's board.

The search for new directors was overseen by Patti Hart, whom Loeb is also attacking as an ethics liability. Loeb is upset that Hart's bio claimed she held a bachelor's degree in marketing and economics from Illinois State University. On Thursday, Yahoo clarified that Hart graduated from the college with a bachelor's degree in business administration with specialties in marketing and economics.

Loeb ended his letter by pressing Yahoo to appoint him and his three preferred candidates to avoid a showdown at the company's annual meeting later this year. Yahoo hasn't scheduled the meeting yet.

"The company can ill afford to continue this misguided fight with its largest outside shareholder while it has so many other fires to put out," Loeb wrote. "There has been enough damage already."