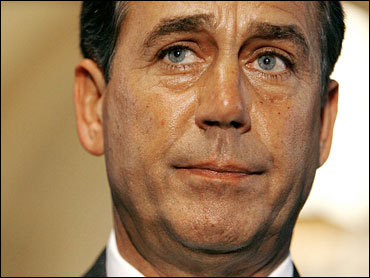 Here are some of the most questionable quotes from public figures this week:

Don't Expect A Speaking Invitation From The VFW Any Time Soon

Responding to a question from CNN's Wolf Blitzer about the cost in U.S. lives and taxpayer dollars of the war in Iraq and how much longer the U.S. should remain committed there, House Minority Leader John Boehner, R-Ohio, reiterated Gen. Petraeus' testimony and added,

"We're making success. We need to firm up those successes. We need to continue our effort here because, Wolf, long term, the investment that we're making today will be a small price if we're able to stop al Qaeda here, if we're able to stabilize the Middle East, it's not only going to be a small price for the near future, but think about the future for our kids and their kids."

Boehner spokesman Kevin Smith later tried to explain Boehner's comments by telling The Politico's John Bresnahan, "Wolf asked about the money spent in Iraq, and that's what Mr. Boehner was referring to when he said our troops' efforts are critical for the safety and security of our country."

For the record, the Iraq War, in military expenditures and reconstruction aid, has so far cost U.S. taxpayers more than $500 billion, and some predict costs will top $1 trillion.

But it wasn't only about the money: Blitzer did make reference to the blood shed in the sands of Iraq, which now stands at 3,772 U.S. service men and women dead, more than 27,000 wounded - not to mention tens of thousands of Iraqi civilians killed and millions displaced to other countries. Small price, indeed.

… Then What Exactly Is The Mission?

During Gen. David Petraeus' testimony before the Senate on Tuesday, Sen. John Warner, R-Va., asked the Bush administration's point man on the U.S. presence in Iraq whether his prescription of maintaining America's troops levels beyond the end of President Bush's term accomplishes the purported mission of our armed forces:

Warner: I hope in the recesses of your heart that you know that strategy will continue - the casualties, stress on our forces, stress on military families, stress on all Americans. Are you able to say at this time, if we continue what you have laid before the Congress, this strategy, that if you continue, you are making America safer?

Petraeus: Sir, I believe that this is indeed the best course of action to achieve our objectives in Iraq.

Warner: Does that make America safer?

Petraeus: Sir, I don't know actually. I have not sat down and sorted out in my own mind. What I have focused on and been riveted on is how to accomplish the mission of the Multinational Force in Iraq.

In two days of Congressional testimony during which the successes of the "surge" and the failures of the Iraqi government were described in questionably optimistic tones, the unspoken message behind the General's somewhat bald statement - I don't know if what we're doing there helps us - was noteworthy.

And Then There Were None

We understand where Sen. Joe Biden, D-Del., was coming from - suggesting perhaps that our current foreign policy is misguided?

"The fact of the matter is that American lives remain in jeopardy and, as I said, if every single jihadi in the world was killed tomorrow, we'd still have a major, major war on our hands."

Take My Ball And Go Home

The Hartford Courant reported that Connecticut Rep. Christopher Shays is angling for a committee assignment - and not just any assignment, but Ranking Member of the House Oversight and Government Reform Committee. Shays has served in the House since 1987, but has had two tough races of late. And so he's informed the Republicans' Steering Committee that if he can't get the assignment he wants, he will not run for re-election next year.

"I'm 61 years old. I've been in Congress 20 years. If I have to fight to become chairman of a committee, given the job I've done, I need to move on."

Shays is the only Republican House member hailing from New England, so his "fight" may be like fighting to remain the only meat-eater in a world of vegetarian restaurants.