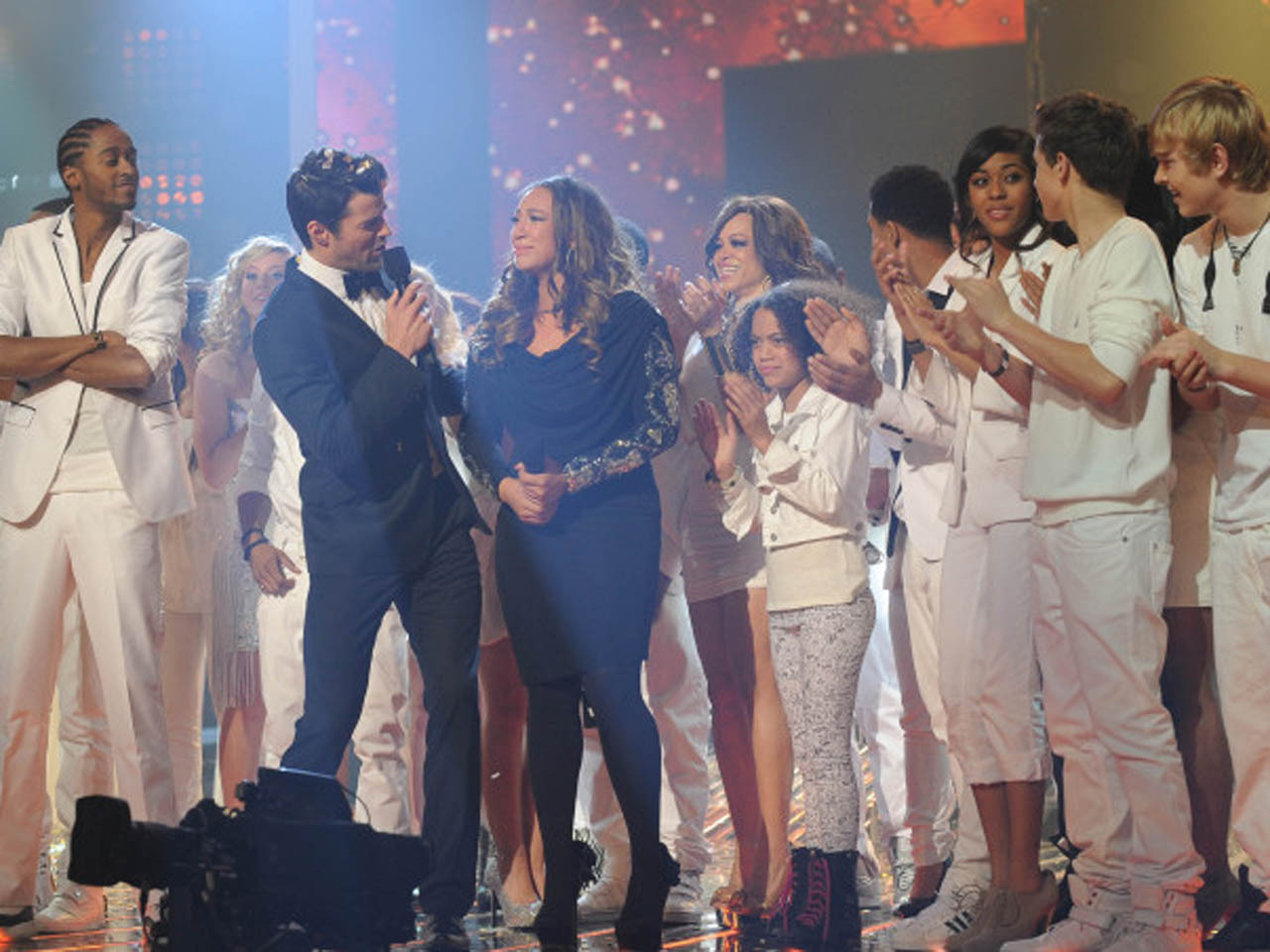 (CBS) "The X Factor" is like Big 'Ole Uncle Joe, who always turns up at Xmas dinner: too self-regarding, too loud and too full of stories that don't seem quite real.

So last night's final show that finally revealed an inevitable final result -- a win for Melanie Amaro -- was as finely balanced as Big 'Ole Uncle Joe's stories of being Ronald Reagan's secret soothsayer.

This was two hours of quite innocent bloat, punctuated by waffle from Steve Jones, aka Mannequin Man, aka presenter who will reportedly be let go for next year's series.

The three finalists were allowed to sing just for the fun of it. So Melanie Amaro sang, gosh, no, yes, really? Another Mariah Carey song: "All I Want for Christmas is You."

"That beautiful voice you have is the best friend a song has ever met," said L.A. Reid.

Reid is the best friend a singer ever met - as long as he decides to be the singer's friend.

Chris Rene managed to don his trilby and offer "Have Yourself a Merry Little Christmas." This had no hip, no hop and was barely pop. Rene again exposed quite merrily the fact that he doesn't have much of a voice.

"You are, no matter what, a star from the inside out," declared Nicole Scherzinger.

Each contestant was offered an emotional little movie about themselves and their past that made them cry. After Rene's, which included tributes from his rehab counselor and his mother, Jones asked: "How are you feeling, Chris?" Rene explained that he was emotional.

Josh Krajcik, who had so clearly blown his chance the night before with peculiar song choices and staging, gave up a confident, relaxed version of "Please Come Home For Christmas."

Simon Cowell told him that he'd represented his age group (the over 30s) so well.

"From Simon's lips to God's ears," whispered Scherzinger, ever philosophical. She went on about hearts, souls, inspiration and herself. It's easy to forget that Scherzinger was originally supposed to be Mannequin Man's co-presenter and was only dragged to the judges' chair after an English lady called Cheryl Cole was reportedly felt to be somewhat underperforming and unintelligible as a judge.

Before we had time to fully contemplate that, suddenly there was Justin Bieber, dressed like an elf about to go clubbing. His voice has certainly dipped an octave since his glory years, though I am not sure he was singing at full blast here - live, that is.

Even more suddenly, there was Stevie Wonder behind him, helping his "Chestnuts Roasting On An Open Fire." Wonder brought along his harmonica, which always brings a little class to proceedings.

Bieber himself is a terribly classy chap who took the time to bring eliminated "X Factor" contestant Drew Ryniewicz onto the stage - yes, she who adores Justin Bieber and doesn't so much adore those who thought she only sang miserable songs - which would be L.A. Reid, in particular.

She managed to sing one line of "Santa Claus Is Coming To Town" and then dance with Bieber in a scene reminiscent of a sweet little prom with parents watching, clutching police batons.

Then Chris Rene was told he had finished third. It wasn't quite as brutal as that, but almost.

"How do you feel?" asked Jones. Rene was grateful, thankful and said all the right things.

"He's a gentleman and a talent," explained Reid.

Rachel Crow suddenly materialized to declare that she was going to take Mannequin Man's job. She introduced Leona Lewis, another Cowell protegee, with a natural excitement that Mannequin Man himself hasn't yet mastered or mustered.

He asked Paula Abdul how her year had been. She replied that she'd had a great night. Where Jones is concerned, communication can be a little difficult.

Absurdity is a little easier. So here we had the L.A. Lakers' Derek Fisher introducing his great friend, 50 Cent, whose music is so family-friendly that it seemed as if every second word of the lyric was bleeped out by Fox. More Lakers - including Matt Barnes and Steve Blake - were wheeled out to wave their arms around, which they will definitely need to do now that Kobe Bryant is injured.

Rapper Astro, rumored to be replacing Bryant on the Lakers, also made an appearance. So did Marcus Canty, accompanying Pitbull and Ne-Yo.

Finally, Amaro had to accompany Krajcik in a version of Bowie's "Heroes." These two seem to genuinely like each other, a lot more than Bowie would have enjoyed this blandification of his song. Moreover, they can both actually sing, which made for a pleasant musical coda to the absurdity.

Finally, Mannequin Man offered everyone the very best of luck, moments before announcing that Amaro had enjoyed all the luck and won.

As she emoted at the information that she was now $5 million richer (allegedly), Jones found the perfect question: "If it's even possible, can you tell me how you're feeling in this moment?"

"I know. It's extraordinary," mused an understanding Jones.

"Melanie deserves this. She has a wonderful voice," interjected Krajcik, who was seriously amused by everything that was going on and can surely look forward to an excellent career.

Amaro was too busy being hugged by her family, so Cowell had to offer a few words of thanks.

Amaro then was asked to sing. She managed a few lines of "Listen", interspersed with long, genuine silences. If the choir didn't come out soon, she would corpse. Fortunately, there it was, angelically dressed in white, twenty voices wafting from the wings to save "The X Factor" winner.

She was engulfed by her fellow competitors, by the magnitude of the performance and by the inanity of Jones asking her three times what she had to say to America.

After the show, Cowell continued to claim that her win - and the fact that he'd brought her back after initially ridding himself of her at his house in the south of France - had been entirely serendipitous.

"It couldn't have been a better ending, the whole story, and the fact that everybody thinks it was something we put together for TV, me bringing her back. It wasn't," he insisted. "It was a genuine mistake, and the irony is she actually won."

If Cowell says it's ironic, it must be ironic. How fortunate (and not at all ironic) that the cameras had been rolling when he had spontaneously realized his mistake.

"The X Factor" will be back next year. We've all learned the formula now: lots of drama, lots of style over substance and an infinite amount of noise.

Cowell will no doubt spend a little time one evening ironing out some of the vast lumps in this formula. The show never reached anything like the 20 million viewers he had so confidently predicted.

Still, this was a jolly pre-Christmas warm-up for main act. Yes, "American Idol" is back in January.