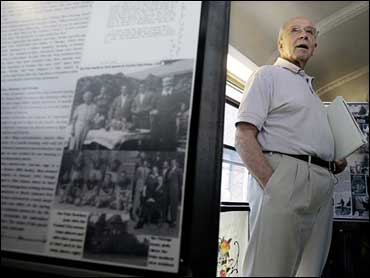 In 1943, 17-year-old Eberhard Fuhr was taken out of his high school classroom in Cincinnati, arrested by FBI agents, and sent off to an internment camp for "enemy aliens" in Texas, where he spent the next 4 1/2 years with his family.

Thousands of Germans experienced a similar fate. They were detained in far fewer numbers in this country than Japanese.

The stories of the Germans have gotten little attention so far, but the Senate took a step toward changing that this week, voting to look into the treatment of Germans and other Europeans in the U.S. during World War II.

The legislation's status is uncertain because it was passed as an amendment to the immigration bill, which stalled in the Senate this week.

Still, just getting a vote on the issue was an accomplishment for Sen. Russ Feingold, D-Wis., who represents a large German population. For the last six years, a hold placed by an anonymous Republican senator had kept it from coming up for a vote.

"Congress and the U.S. government did the right thing by recognizing and apologizing for the mistreatment of Japanese Americans during World War II," Feingold said. "That same respect has not been shown to the many German Americans, Italian Americans, and European Latin Americans."

Feingold's "Wartime Treatment Study Act" would set up a commission to examine the treatment of German, Italian and other Europeans; and a second commission to look into how Jewish refugees fleeing persecution were treated.

Sen. Jeff Sessions, R-Ala., opposed the bill, saying it was based on findings "that slander America incorrectly." Those findings say, in part, that U.S. wartime policies were "devastating" to Germans and Italians living in the United States.

Hertling said that the Justice Department contacted the senior historian for the U.S. Holocaust Memorial Museum back in 2001, "who advised that that bill's identical depiction of the treatment of Axis citizens and European Americans was 'outrageously exaggerated."'

The letter doesn't identify the historian by name. A Holocaust Museum spokesman identified him as Peter Black, but said the museum wouldn't have any comment on the legislation.

The historian's comments underscore the need for the commission, said Feingold, who is Jewish.

"For anyone to deny the stories that German-Americans in Milwaukee told me, convincing me to do this, is a whitewashing of reality," he said. "There was some pretty rough stuff that happened, in terms of people losing their businesses, in terms of being interned in Texas — a variety of things that had happened to people that had done nothing wrong."

"Whenever you have a conflict, the danger to those who are of the same background that include our enemies is real," Feingold added. "And you always have to guard against that."

According to retired history professor Stephen Fox, who has written a book about the FBI roundup of German Americans during World War II, roughly 3,000 Italians and 11,000 Germans were detained in the U.S., including some Germans who were sent here from Latin America and some German Jews.

More than 120,000 Japanese-Americans, including U.S. citizens, were imprisoned during World War II.

In general, Fox said, the FBI targeted resident alien Germans who were involved in German organizations, or made comments sympathetic to Hitler, or had contact with relatives in Germany. "By far, most were innocent," he said.

Fuhr said he was arrested several months after his parents had been arrested and interned. They were reunited along with his two brothers at a camp in Crystal City, Texas. Now 82, Fuhr lives outside Chicago.

Life at the camp was boring but not unpleasant, Fuhr said. What angers him is he remained an internee until 1947, two years after the war ended. He spent the last months at Ellis Island, where he faced possible deportation.

"I really don't object to that time until V-E Day," Fuhr said, referring to the day the Allies defeated Nazi Germany, "but I resent every minute after that."

Anneliese Krauter, 72, the U.S.-born daughter of German immigrants, went to the Crystal City camp in 1943 with her mother and brother to be reunited with her father, who had been arrested the year before. He had unknowingly rented a room to a German spy, she said. The family was forced to close its butcher shop in the New York City borough of Brooklyn.

Krauter, who now lives outside Indianapolis, described life at Crystal City as "campy," with movies, cultural exchanges with Japanese internees, and classes. "It was certainly not an existence that would compare in any way to a gulag or concentration camp," she said.

"This was by my father's choice," Krauter recalled. "At this point, he was disillusioned and disappointed." She returned to live in the United States in 1953.

Both Fuhr and Krauter are participating in an exhibit called "VANISHED: German-American Civilian Internment, 1941-1948," by the TRACES Center for History and Culture in St. Paul, Minn.