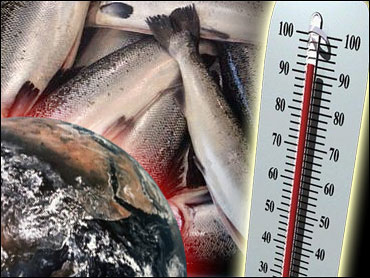 Higher water temperatures are threatening the world's fish by reducing food stocks and stunting growth, which could cause them to reproduce less, the World Wildlife Fund said Friday.

Global warming is causing the world's rivers, lakes and oceans to heat up and some temperate fish like salmon, catfish and sturgeon cannot spawn at all if winter temperatures do not drop below a certain level, according to the Gland, Switzerland-based conservation group.

"The balance is set to tip, as climate change continues the pressure on fish populations already strained by overfishing, pollution and habitat loss," said Katherine Short, a WWF fisheries expert. "We must act to protect fish, both marine and freshwater. They are one of our most valuable biological, nutritional and economic assets."

Although fish metabolisms normally speed up as temperatures rise, insufficient food supplies could slow their growth and reproduction rates, WWF said. Freshwater fish in particular may not be able to breathe because less oxygen dissolves in warmer water.

Fish populations also may move to cooler waters as they search for a habitat with temperatures more like what they are used to. However, that could cause problems for other species which rely on them as a food source, WWF said.

About 120,000 sea birds starved to death in the Gulf of Alaska in 1993 because their normal prey had moved further from the surface into cooler waters and the birds were unable to dive deep enough to reach their usual food, the conservation group said.

"If we fail to secure deeper reductions in greenhouse gas emissions we will increase the pressures on fish and billions of people that depend on them as an important source of protein," said Stephan Singer, a climate change expert at WWF.