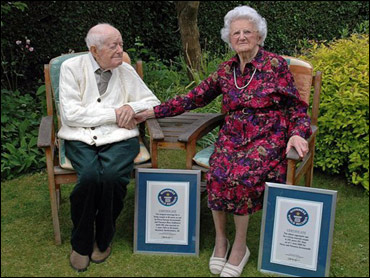 Percy Arrowsmith, who with his wife set the record two weeks ago for the world's longest marriage, died Wednesday, his wife of 80 years by his side. He was 105.

Arrowsmith died at his home in Hereford, northwest of London, his bishop said.

Arrowsmith and his 100-year-old wife, Florence, celebrated their 80th wedding anniversary and a place in the Guinness Book of World Records on June 1.

"Percy and Flo were very happy when I saw them on their anniversary," said the Rev. Anthony Priddis, bishop of Hereford. "They were still very much in love with each other."

Earlier this month, Guinness World Records recognized the pair as holding records for the longest marriage for a living couple and the oldest aggregate age of a married couple.

The Arrowsmiths, who have three children, six grandchildren and nine great grandchildren, claimed the key to their long marriage was not to go to sleep on an argument.

"We will all be praying for Flo and the family in their grief," Priddis said.