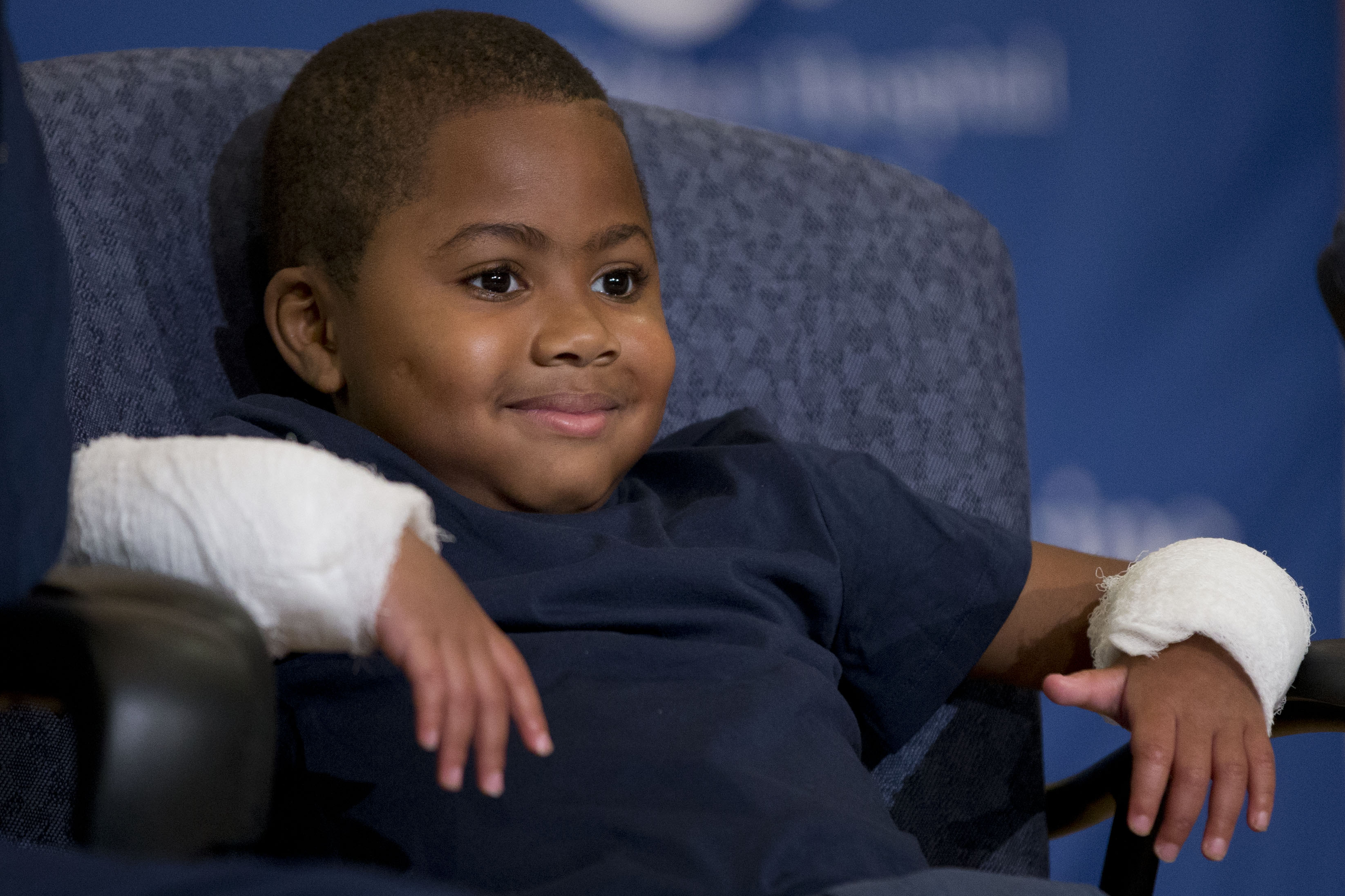 For the first time ever, doctors have transplanted donor hands and forearms onto a child. Eight-year-old Zion Harvey lost his hands and feet at the age of 2 due to a serious infection that also led to a kidney transplant.

The little boy appeared at a news conference Tuesday with staff from Penn Medicine and Children's Hospital of Philadelphia (CHOP), who performed the operation. "Thank you for helping me through this bumpy road," he said.

The 10-hour surgery took place in early July and involved a 40-member team of nurses, doctors and surgeons led by Dr. L. Scott Levin, chairman of the department of orthopedic surgery at Penn Medicine and director of the hand transplantation program at Children's Hospital.

During the operation, the donor's hands and forearms were attached by connecting bone, blood vessels, nerves, muscles, tendons and skin. The surgical team was divided into four working groups, two focused on the donor hands, and two focused on the recipient. First, the bones in his arm were connected with steel plates and screws. Next, microvascular surgical techniques were used to connect the arteries and veins. Once blood began flowing through the reconnected blood vessels, surgeons repaired and rejoined each muscle and tendon one-by-one. Then they reattached nerves and closed the surgical sites.

"The success of Penn's first bilateral hand transplant on an adult, performed in 2011, gave us a foundation to adapt the intricate techniques and coordinated plans required to perform this type of complex procedure on a child," Levin said in a press statement. "CHOP is one of the few places in the world that offer the capabilities necessary to push the limits of medicine to give a child a drastically improved quality of life."

Harvey, from a suburb of Baltimore, is a bright and precocious little boy who has told his doctors that he cannot wait to someday hang on the monkey bars. Despite his difficulties, the child had adapted well to life without hands, learning to eat, write and play video games. He is very active and has prosthetics for his feet so he can walk, run and jump on his own.

Only 25 hand transplants have been done in the world. Harvey is the first child to receive such a procedure.

Double hand transplantation is a complex procedure that involves many surgical and non-surgical components. The potential recipient must first undergo extensive medical screenings and evaluations. Harvey was an ideal transplant candidate due to his previous medical condition.

"Zion's kidney transplant following his infection made him a candidate for transplant because he was already taking anti-rejection medication," Dr. Benjamin Chang, co-director of CHOP's Hand Transplant Program and associate chief of the Division of Plastic Surgery at Penn Medicine, said.

Harvey still has years of growth and development ahead, and doctors say his new arms will grow along with him.

"Once we reattached the parts, the growth plates stay open and allow the amputated part to grow," Levin said at a press conference about the surgery. "So we have every reason to believe that because Zion's hands are alive and his growth plates are in tact from the donor that he will grow like a normal child."

Harvey gets rigorous therapy several times a day and can already move his hands a little. He is scheduled to return home to Maryland in several weeks.

In a video produced by CHOP (below), Levin said he hopes that Zion will be the first of "literally hundreds or thousands of patients that are going to be afforded this operation."