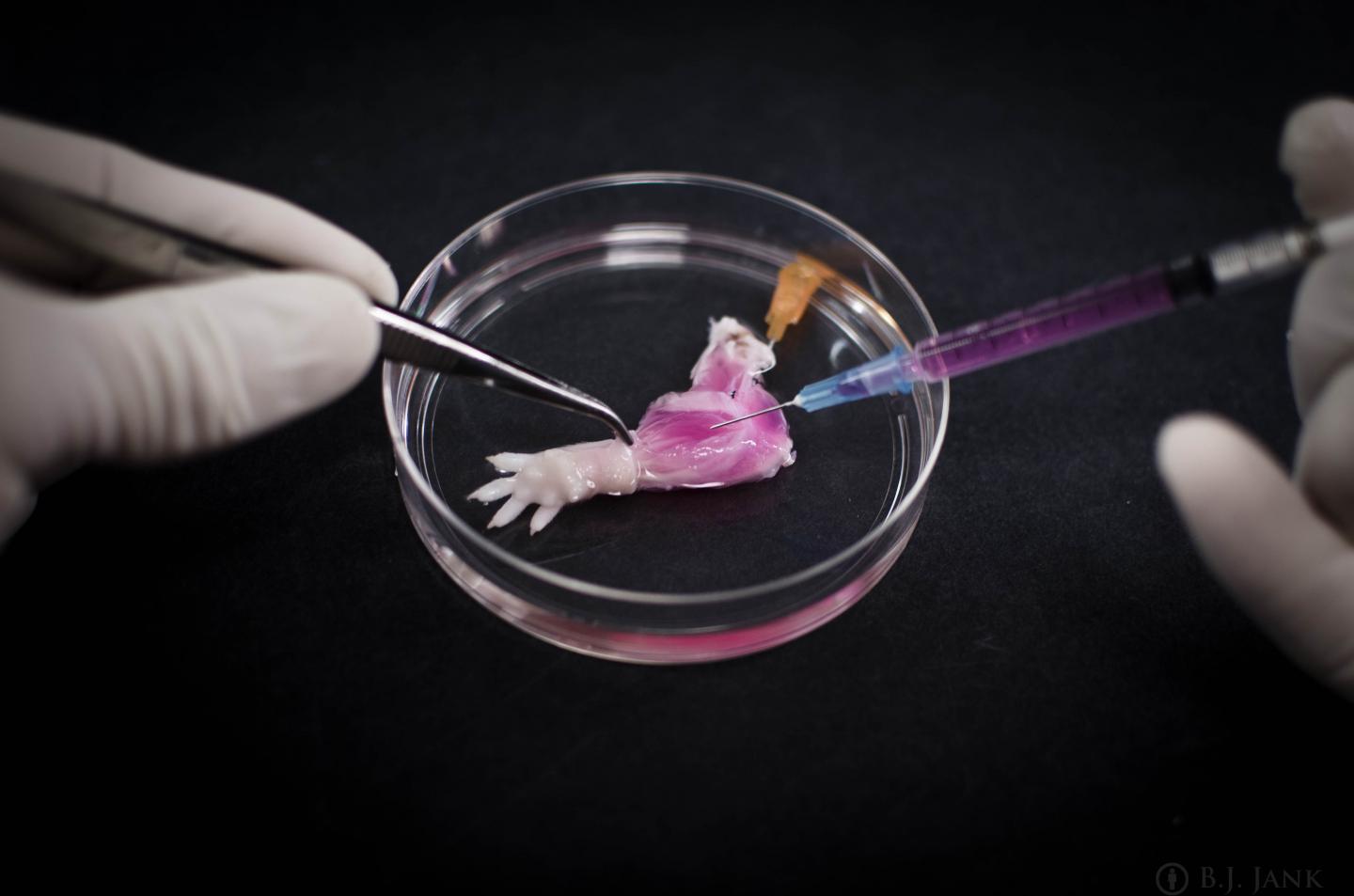 A rat in Boston received what scientists are calling the first lab-engineered replacement limb.

The "bio-artificial" rat forelimb is the result of a research experiment published online in the journal Biomaterials. Starting with the framework of a donor limb, scientists at Massachusetts General Hospital then brought to life using the recipient's own cells. The newly regenerated limb is an ambitious experiment that moves the field of bioengineering closer to its goal of helping human patients.

"Once you suffer from an injury, whether it's a burn or a heart attack or any sort of injury that leads to loss of viable tissue, your options are quite limited," said lead researcher Dr. Harald Ott, of Mass General's Department of Surgery and the Center for Regenerative Medicine. "Medicine has been good at making you survive. But in the end, there's no solution or no cure for your problem."

Using an approach that has been developed in regenerative medicine over the past several years called decellularization, Ott's research team rebuilt and incubated a new, living rat leg structure from a deceased donor rat.

First, all donor cells were stripped with a detergent from the donor leg, leaving just the underlying structure of bones, ligaments and hollowed-out blood vessels, called the scaffolding. Then, the rat's own stem cells were added back in to regenerate veins and arteries and jump-start the formation of muscle. Muscle cells were grown further through electrical stimulation. The whole process is documented in this time-lapse video from the lab.

Once the rat leg was formed and the muscles contracted when stimulated the way living muscles should, researchers transplanted the limb onto a living rat. The parts of the newly attached bio-artificial limb accepted the blood and tissue of the living rat. Muscles reacted normally in tests, grasping or contracting along with the electrical stimulation, at 80 percent the strength of a newborn rat. To understand more about what the process would require for humans, Ott and his team also decellularized baboon forearms.

This latest development shows that the ability to regenerate human limbs may not be out of reach.

Each year, approximately 185,000 amputations are performed in the U.S. as a result of trauma, cancer surgeries and vascular disease, often related to diabetes, according to National Limb Loss Resource Center. There are more than 2 million living amputees. Most of them either learn to function without any replacement or use prosthetic devices to provide some balance and function.

For people who have lost a limb, a bio-artificial replacement would offer the benefits of a normally functioning human limb with soft tissue and fine motor skills, using their own cells -- and therefore avoiding the risk of rejection associated with transplants from one person to another.

Hand transplants in the past several years have been successful, about 85 done worldwide, according to Johns Hopkins University. But they still come with many risks, like any person-to-person transplant. Full limb transplants are rare. A major reason for the small number of transplants is the high risk, on two levels: possible infection that would require removing the transplant, and possible rejection of the donor limb that requires taking a potent cocktail of immune-suppressing drugs for life.

"If you look at amputees, typically those are young patients. Long-term immunosupression for a non life-threatening disease, and in reality amputation is often not a life-threatening condition once you've healed it -- it's an ethical dilemma," said Ott. "Over many years are significant [risks] -- it leads to kidney failure, it can lead to cancer formation, etc."

The field of regenerative medicine is trying to eliminate those risks by eliminating the cells from donor limbs that would cause rejection, and replacing them with a patient's own. They have successfully regenerated organs and tissues this way, mostly using pig tissue as the "scaffolding," or underlying structure. But the leap to develop the much more complex structure of an entire bio-artificial limb is huge.

Another leader in the field, Dr. Steven Badylak, a professor in the Department of Surgery at the University of Pittsburgh and deputy director of the McGowan Institute for Regenerative Medicine, was positive about the latest study.

"This is a very aggressive approach to limb and digit reconstruction," Badylak told CBS News. His own research team helped develop the decellularization process and has performed successful grafts for wounds. "It's based upon sound principles. I think we're going to learn a lot from it."

But, he added, the complexity of creating a bio-artificial limb, paired with the limitations of disparate and inadequately funded research, will make the progress toward fully-functional regenerated limbs move slowly.

"When we're talking about an entire limb where we've got nerves and blood vessels and bones and cartilage and everything else that needs to be in there, I really don't see that happening in the next decade," said Badylak.

The next steps require some careful detective work to figure out how to make a fully-formed, self-functioning limb that will attach and work with the recipient's nervous system, to restore normal sensation. Researchers will also need to figure out whether stems cells, regular cells or some combination of the two will work best to help regenerate the living tissues. The order of the whole process that would work for humans is also still uncertain.

Much sooner, doctors may be able to use this process to help regenerate areas of the body that have been badly damaged by accidents like burns or by surgical procedures like cancer removal. And then, possibly, the beginnings of limb replacement.

"I think if you limit it to a very small part of the digit to start with, I think that's something that could happen reasonably quickly, within a couple of years," said Badylak.

"I don't think that any great scientific breakthrough is necessary to make it happen, but there's a lot of hard work of trial and error that's going to be needed to make it work."

But both Ott and Badylak agree on that most of the information they need to make it happen is there, it's just a question of figuring out the materials and the order necessary to make the cells generate and assemble in the right way.

"There's no conceptual reason why this should not work for human cells," said Ott. "It is a collaborative effort that in the end will lead to success."