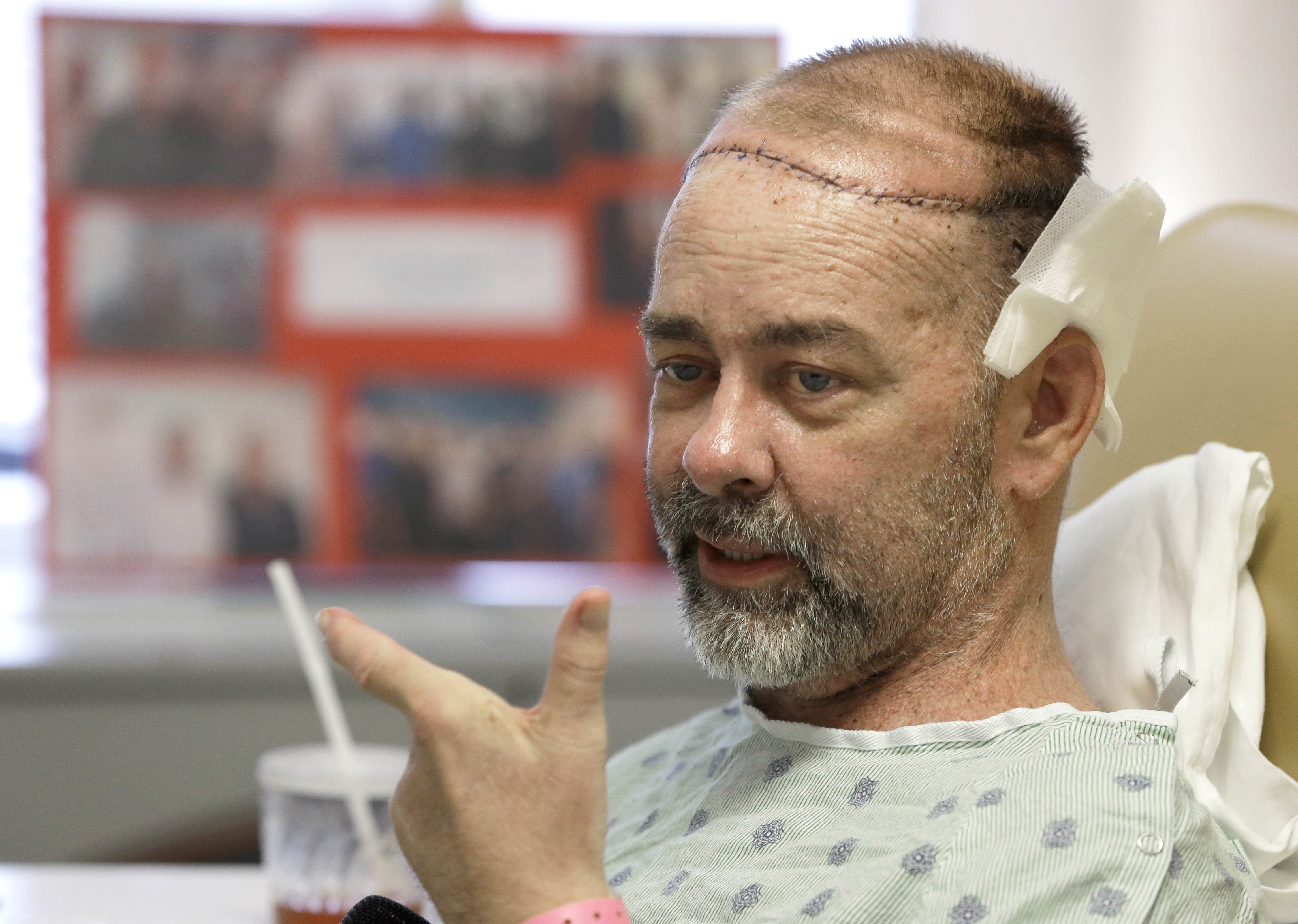 Texas doctors say they have done the world's first partial skull and scalp transplant to help a man with a large head wound from cancer treatment.

The recipient -- Jim Boysen, a 55-year-old software developer from Austin, Texas -- expects to leave the hospital Thursday. He received a new kidney and pancreas along with the scalp and skull grafts in two operations that spanned over 24 hours.

"I feel much better than I did two weeks ago, believe it or not," Boysen said at a news conference Thursday.

Boysen said he was stunned at how well doctors matched him to a donor with similar skin and coloring.

"It's kind of shocking, really, how good they got it. I will have way more hair than when I was 21," Boysen joked in an interview with The Associated Press.

"This was a very complex surgery because we had to transplant the tissues utilizing microsurgery," Dr. Michael Klebuc, the surgeon who led the Houston Methodist Hospital plastic surgery team, said in a statement. "Imagine connecting blood vessels 1/16 of an inch under a microscope with tiny stitches about half the diameter of a human hair being done with tools that one would use to make a fine Swiss watch."

Last year, doctors in the Netherlands said they replaced most of a woman's skull with a 3-D printed plastic one. The Texas operation is thought to be the first skull-scalp transplant from a human donor, as opposed to an artificial implant or a simple bone graft.

Boysen had a kidney-pancreas transplant in 1992 to treat diabetes he has had since age 5 and has been on drugs to prevent organ rejection. The immune suppression drugs raise the risk of cancer, and he developed a rare type called leiomyosarcoma (pronounced lee-oh-my-oh-sar-KOHM-ah).

It can affect many types of smooth muscles but in his case, it was the ones under the scalp that make your hair stand on end when something gives you the creeps.

Radiation therapy for the cancer destroyed part of his head, immune suppression drugs kept his body from repairing the damage, and his transplanted organs were starting to fail -- "a perfect storm that made the wound not heal," Boysen said.

Yet doctors could not perform a new kidney-pancreas transplant as long as he had an open wound. That's when Dr. Jesse Selber, a reconstructive plastic surgeon at MD Anderson, thought of giving him a new partial skull and scalp at the same time as new organs as a solution to all of his problems.

Houston Methodist, which has transplant expertise, partnered on the venture. It took 18 months for the organ procurement organization, LifeGift, to find the right donor, who provided all organs for Boysen. The donor was not identified.

Boysen "had a wound that was basically all the way through his skull to his brain," Selber said.

In an operation involving about a dozen doctors and 40 other health workers, Boysen was given a cap-shaped, 10-by-10-inch skull graft, and a 15-inch-wide scalp graft starting above his forehead, extending across the top of his head and over its crown. It ends an inch above one ear and two inches above the other.

The pancreas and kidney were transplanted after the head surgery was done.

"I was pleased that, despite the difficult nature of the procedure, the donor and recipient surgeries worked flawlessly," said Dr. A. Osama Gaber, director of the Houston Methodist J.C. Walter Jr. Transplant Center and the surgeon who performed the kidney and pancreas transplants. "Our nurses and transplant coordinators fell in love with Jim and were excited to see him do so well."