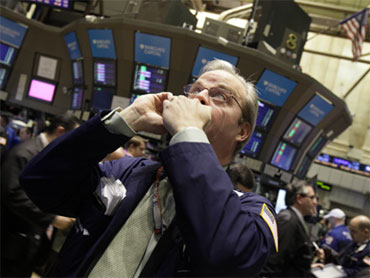 NEW YORK - Escalating protests in Egypt jarred world financial markets on Friday. Stocks fell while the dollar, Treasurys and gold rose as investors sought to reduce their exposure to risk.

The Egyptian government's response to widespread street protests unnerved investors. The military was deployed in an effort to quell the protests and the headquarters of the ruling party was on fire. Thousands of people defied a curfew, and Internet and cell phone service has been cut off.

Earlier, riot police fired tear gas, rubber bullets and used water cannons to disperse crowds that had gathered in the largest challenge to Egyptian president Hosni Mubarak's thirty-year rule. The fall of the Tunisian government two weeks ago has raised concerns that other authoritarian governments in the Middle East could also be toppled.

"The safety trade is back," said Jeffrey Frankel, president of broker Stuart Frankel & Co. "Gold is up. Oil is up. Anything related to overseas is getting hit."

Prices of Treasury bonds, considered one of the safest assets, rose sharply. The yield on the benchmark 10-year Treasury note fell to 3.33 percent from 3.38 percent late Thursday. Bond yields fall when their prices rise.

"Traders are watching this flare-up in the Middle East and using it as a reason to take profits," said Doug Godine, managing director at Signal Hill, an investment bank.

Of the 30 large company stocks that make up the Dow Jones industrial average, 28 fell. The two exceptions, Procter & Gamble and DuPont, were flat.

The Dow lost 0.4 percent for the week after eight straight weeks of gains.

The Nasdaq composite fell 68.39, or 2.5 percent, to 2,686.89. The index was not updated nearly an hour after the market opened due to technical problems. The Nasdaq lost 0.1 percent for the week.

Five stocks fell for every one that rose on the New York Stock Exchange. Consolidated volume was high at 5.6 billion shares.

Disappointing earnings reports also rattled investors, said Brian Wenzinger, a portfolio manager at Aronson Johnson Ortiz in Philadelphia. "Some companies like Apple are doing well, but the bulk are not being too optimistic," Wenzinger said.

Ford Motor Co sank 13 percent after its earnings fell short of Wall Street's projections. Amazon.com Inc. fell 7 percent after reporting that higher costs cut down its profit margins. Microsoft Corp. lost 4 percent after it said that the profitability of its Windows division was falling.

A lower than expected report on the U.S. economy helped lead to a market sell-off as well. The Commerce Department reported that U.S. gross domestic product grew at an annual rate of 3.2 percent between October and December. That was below the 3.5 percent that analysts had forecast.

Sara Lee Corp. fell 2.7 percent after announcing a plan to split into two companies. One, a food and retail business, will keep the Sara Lee name and also operate the Jimmy Dean and Hillshire Farms businesses. The other, which has yet to be named, will hold the current company's beverages and baked goods lines. The company had considered selling the whole business but was unable to get a satisfactory price for it.