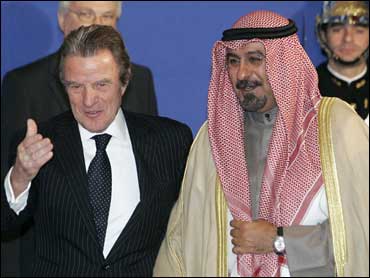 World donors pledged US$7.4 billion (euro5.1 billion) over the next three years for the Palestinians at a conference Monday, a massive sum that beats the Palestinians' own expectations, French Foreign Minister Bernard Kouchner said.

"The real winner today is the Palestinian state," Kouchner told a news conference after the gathering of nearly 90 countries and international organizations in Paris. "We wanted US$5.6 billion, we have US$7.4 billion, not bad."

The Palestinian government had asked for US$5.6 billion (euro3.8 billion) in 2008-2010 to shore up its economy amid a renewed push for a Palestinian state.

"Our feeling is great, this is generous. It is a vote of confidence for the program, and a sign of solidarity on the Palestinian question," Palestinian Planning Minister Samir Abdullah told The Associated Press.

He confirmed the overall figure and said the pledges include US$2.9 billion (euro2 billion) for 2008.

Palestinian Prime Minister Salam Fayyad said, "We take it as an endorsement." He called it part of the process for "establishing an independent Palestine."

The Palestinians are seeking to ride on the momentum of resumed peace efforts after a U.S.-sponsored conference in Annapolis, Maryland, last month.

The sum pledged Monday was substantial even compared to the more than US$10 billion (euro7 billion) that donor countries have given to the Palestinians over the past decade, according to the World Bank. Officials have said the Palestinians have received more international aid on a per capita basis than any other nation or group of people in the postwar period.

World leaders at the conference also urged Israel to ease restrictions on movement in the West Bank and Gaza to make a recovery of the Palestinian economy possible.

Some 90 countries and international organizations came together in Paris for the biggest pledging conference in more than a decade.

As numbers trickled in, many donors were focusing their aid on 2008, leaving plans for future budget years hazy. That made it difficult to keep a running tally of overall contributions.

U.S. Secretary of State Condoleezza Rice pledged US$555 million (euro382.5 million) for 2008. However, the money includes about US$400 million (euro275 million) that the White House has already announced but that has not been approved by Congress.

"The Palestinian Authority is experiencing a serious budgetary crisis," Rice said. "This conference is literally the government's last hope to avoid bankruptcy."

The United States provides more than US$2 billion (euro1.4 billion) a year in aid to Israel, its closest Mideast ally and single largest recipient of U.S. foreign aid. Egypt, the first Arab state to make peace with Israel, receives about US$1.3 billion (euro900 million).