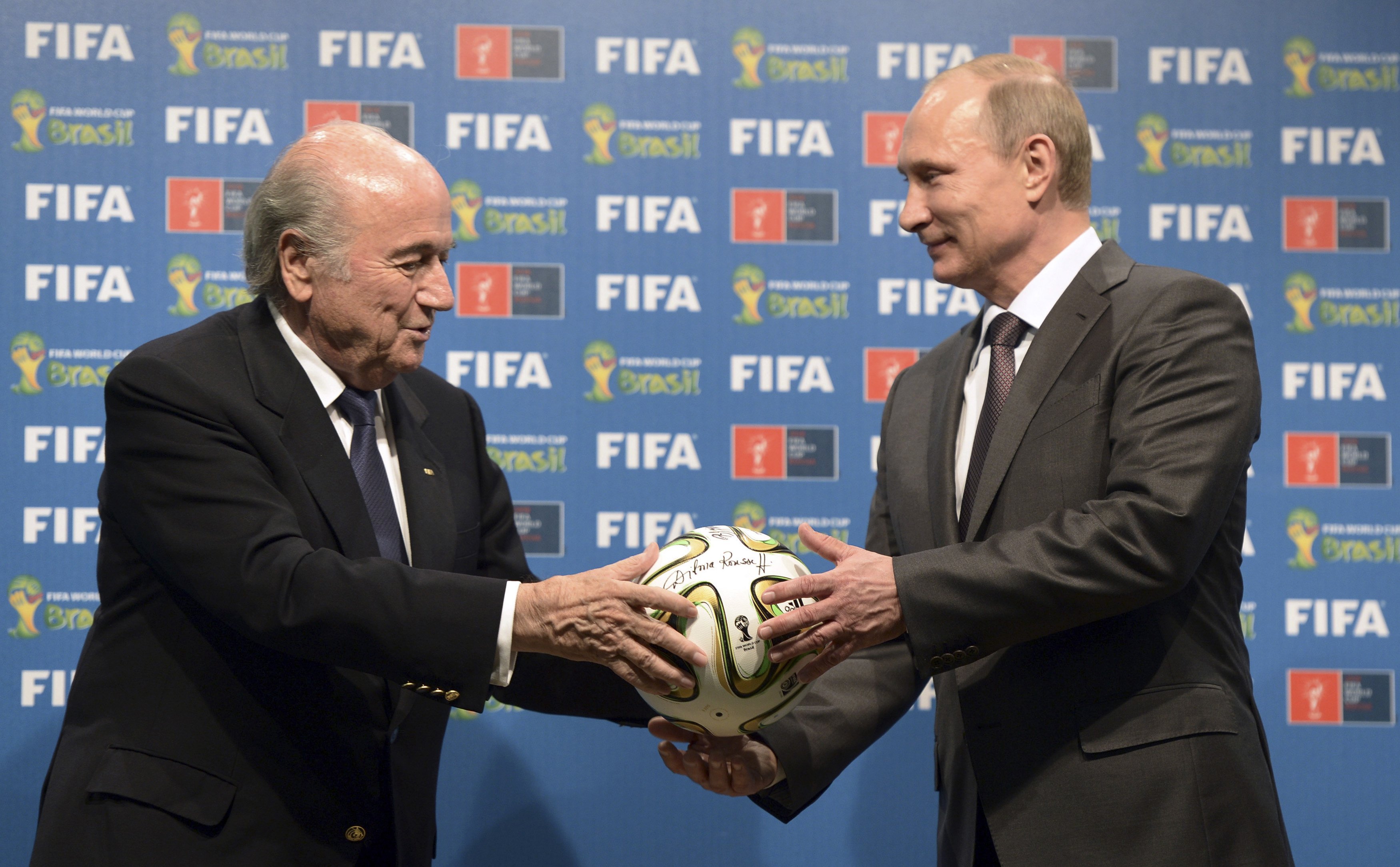 Only hours after the 2014 World Cup came to a thrilling conclusion, fans and players - and Vladimir Putin - are already looking forward to the 2018 World Cup in Russia.

Russian sports minister Vitaly Mutko said Saturday that the conflict in Ukraine will not affect the 2018 World Cup.

Mutko, the local organizing committee chairman and a FIFA board member, said he did not foresee "any major issues" for the tournament in Russia.

"It's a different subject and it will not influence preparations for the World Cup at all," Mutko said at a briefing designed to explain Russia's $20 billion project to host the next World Cup.

Brazil and Russia, which hosted the Winter Olympics in Sochi in February, have defied widespread doubt about their ability to host safe and well organized events.

"Sometimes you have to suffer some criticism," Mutko said through a translator. "Criticism is important. It's stimulating, it's constructive."

Still, the World Cup in Russia is expected to be ready quicker and with less drama than FIFA saw in Brazil.

Incidents of racism and fan disorder are a concern, however. FIFA vice president Jeffrey Webb said this month his discrimination task force viewed Russia as a bigger challenge than Brazil.

Mutko said the problems with fan groups in Russian club matches were not worse than other countries.

"It is a whole sub-culture and you just have to deal with it," he said. "The World Cup is something different. We should not mix the two things up."

Mutko also said he expects Russia to be cleared of any wrong-doing when a FIFA investigation of the 2018 and 2022 bid campaigns is resolved, likely in September.

Tensions between Russia and Ukraine could persist for much longer, even if a ceasefire is soon reached.

If Ukraine qualifies for the next World Cup, it could be drawn in a group with Russia, which is automatically seeded as host.

World Cup host city Rostov-on-Don is about 100 miles from current conflict in Donetsk. Sochi also faces the Crimea across the Black Sea.

They are among 11 host cities which Putin's government is seeking to modernize with new stadiums and other infrastructure projects.

One of the biggest challenges is providing accommodation outside the main cities of Moscow, St. Petersburg, Sochi and Kazan.

"In some cities we will need to do a lot more with the help of investors," Mutko said, adding that Russia hopes to welcome 1 million international visitors for the month-long tournament.

After regular spats between FIFA and Brazilian politicians, Mutko predicted only minor and private disagreements over the next four years.

"In some questions we would like to see more investment from FIFA into the organization of the World Cup," the minister said, adding that Russia had been happy to apply for hosting rights. "Whatever you have agreed to do, you should just do it."

As for Brazil, the country pulled of a magnificent tournament, albeit with a few bumps. It's the team that has left many Brazilians wondering what went horribly wrong.

The cup was widely seen as theirs for the taking, especially on home turf. They leave the Cup in fourth place with their star badly injured and the brutal memory of a 7-1 rout by the Germans in front of a global audience.

The most successful nation in World Cup history has been eliminated in three straight tournaments, enough to raise questions about whether it's doing the right things to keep up with countries that have dominated the sport in recent years.

It's already clear Brazil won't be the same after the home tournament.

A change in coach is almost certain, and new players will be joining Neymar and Oscar for the 2018 World Cup in Russia. Critics say bigger changers are needed, including in the local football confederation.

The resounding 7-1 loss to Germany, which embarrassed the nation, could become a turning point for the national team. The semifinal defeat has everyone thinking about the need to rebuild.

"We failed. We didn't play up to expectations, we know it wasn't a good tournament," said striker Neymar, who missed the last two matches because of a back injury. "We didn't play the kind of football that the Brazilian national team plays. It was just regular, and that's why we still reached the semifinals, but it wasn't Brazilian football, not the kind of football that enchants everybody."

Brazil never displayed its traditional "Jogo Bonito," or "Beautiful Game," and ended the tournament with three wins, two draws and two losses, including 3-0 to the Netherlands in the third-place match on Saturday.

"Brazilian football has to evolve in general," right back Dani Alves said. "We can't discredit the work that has been done by this team, but we have to find a way to start restructuring our football from the youth levels up."

The president of the Brazilian confederation, Jose Maria Marin, had said that losing the World Cup at home would be like "going to hell."

"We need to think football differently," said Brazilian coach Paulo Autuori, who led Sao Paulo to the Club World Cup title in 2005. "We need the Brazilian confederation in the hands of people from football. We need people in charge who can think football."

Marin, a former politician, is leaving the confederation next year and will be replaced by Sao Paulo state federation president Marco Paulo Del Nero. Both were politically linked to Ricardo Teixeira, who ruled the confederation for more than 20 years before resigning in 2012 citing medical reasons and amid a cloud of allegations of corruption and irregularities in his administration.

Del Nero had said he would like Scolari to stay as the head of the national team despite his failure to win the title at home, but Marin was expected to announce on Monday that the confederation will not keep the coach after the World Cup. Scolari had said it would be up to the confederation to decide whether he would continue.

Scolari was picked to lead the 2014 team mostly because of his popularity and experience from the 2002 title, but many critics said he was outdated as a coach. Before rejoining the national team, the coach was relegated in the Brazilian league with Palmeiras.

"We should thank him, but we need to choose new people with new thoughts about how to play the Brazilian way," said former Brazil star Zico, who also blamed Brazil's problems "on poor administration, a lack of structure and a vacuum of leadership."

Scolari said Brazil is going through a period in which there are "fewer young promising players" in the country, and said that the confederation needs to "keep working" to make sure more appear in the future.

There are a few names already rumored to be the next coach, including Tite and Muricy Ramalho, who have been successful with local clubs in recent years. Ramalho is a four-time Brazilian champion, while Tite led Corinthians to the Club World Cup title in 2012. There is also talk in local media about international coaches, including Pep Guardiola, Jose Mourinho, and Chile's Argentine coach Jorge Sampaoli.

Regardless of the new coach, many of the players will be changing.

Of the 23 players picked by Scolari for the home tournament, only seven will be younger than 30 in Russia - Neymar, Oscar, Marcelo, Luiz Gustavo, Paulinho, Willian and Bernard.

"It was disappointing in the end, but we have to remember that this generation has started a rebuilding process for 2018 with a fourth-place finish at the World Cup," Scolari noted.

Neymar, who will be 26 in Russia, will still be carrying the hopes of the national team for a sixth world title.

"This will hurt for a long time, but we know that better days will come," the 22-year-old striker said. "We have to do whatever possible to make sure we can make the Brazilian people happy again."