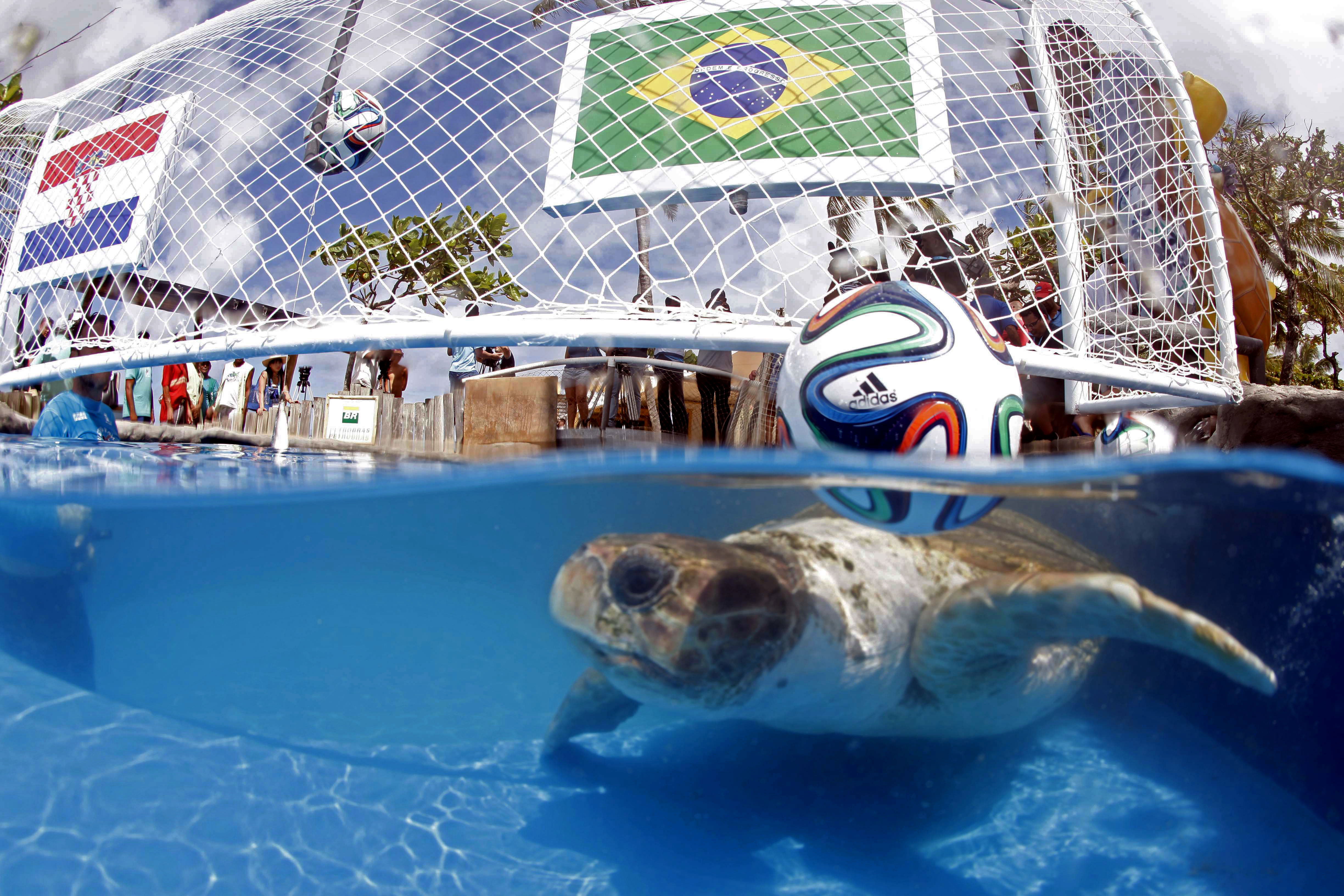 As soccer's grandest spectacle kicks off in Brazil Thursday, there is no shortage of oracles - both human and reptile - picking the winner.

The animal oracle predictions for the 2014 World Cup have begun, with host nation Brazil getting a vote of confidence from its chosen turtle tipster.

By making a patriotic choice of food, loggerhead turtle Big Head predicted Tuesday that the host nation will beat Croatia in the opening game of the World Cup on Thursday. Big Head is Brazil's answer to Germany's Paul the Octopus, who started the psychic animal craze during the 2010 World Cup and spawned a slew of imitations around the world.

At the Praia do Forte turtle sanctuary north of Salvador, the 25-year-old male sea turtle was given the choice between eating a fish hung from a Brazilian flag or a Croatian flag. After attempting to eat the fish hung from a football indicating a draw, Big Head chose the one representing Brazil.

The small crowd of onlookers cheered in appreciation of Big Head's choice.

Meanwhile, actual human beings are also chiming in - and many are agreeing with Big Head. Five of six CBSSports.com experts are picking the host nation to be crowned champion at Maracana Stadium in Rio. The one dissenter - Jason La Canfora - sees Argentina winning it all.

Meanwhile, Brazil coach Luiz Felipe Scolari has projected that Argentina will be the most likely opponent if the hosts can make it all the way to the World Cup final.

And what does Pele - Brazil's most legendary player - think? He has pegged Chile as one of the tournament favorites. (It should be noted that Pele's predictions have been way off in the past - the legendary player was confident an African country would capture the World Cup before the turn of the century and also believed Colombia would win it in 1994.)

And what about the good old USA? American fans decked out in red, white and blue on Wednesday watched their team's lone public training session in Brazil, cheering and seeking autographs.

But the team's coach, Jurgen Klinsmann, maintains they shouldn't expect the U.S. to lift soccer's top trophy for the first time July 13, even if that stance upsets some.

"I think for us now, talking about winning a World Cup is just not realistic," the American coach said during his first news conference in Brazil before the tournament. "First, we've got to make it through the group. So let's stay with our feet on the ground and say let's get that group first done, and then the sky is the limit."

Team USA also has the misfortune of being slotted in Group G -- the 2014 World Cup's so-called "Group of Death." The U.S. men's national team will have to be successful against the likes of Germany, Portugal and Ghana to move on to the knockout stage. Germany is among a handful of favorites to win the whole thing with their deeply talented and tested squad. Portugal is led by the man currently considered the world's best soccer player: Cristiano Ronaldo. Ghana has knocked the U.S. out of the last two World Cups in a row.

For what it's worth, researchers at Goldman Sachs have given Brazil - buoyed by home-field advantage -- a 48.5 percent chance of winning the World Cup. Team USA? The investment banking firm says the Americans have a 0.5 percent chance.