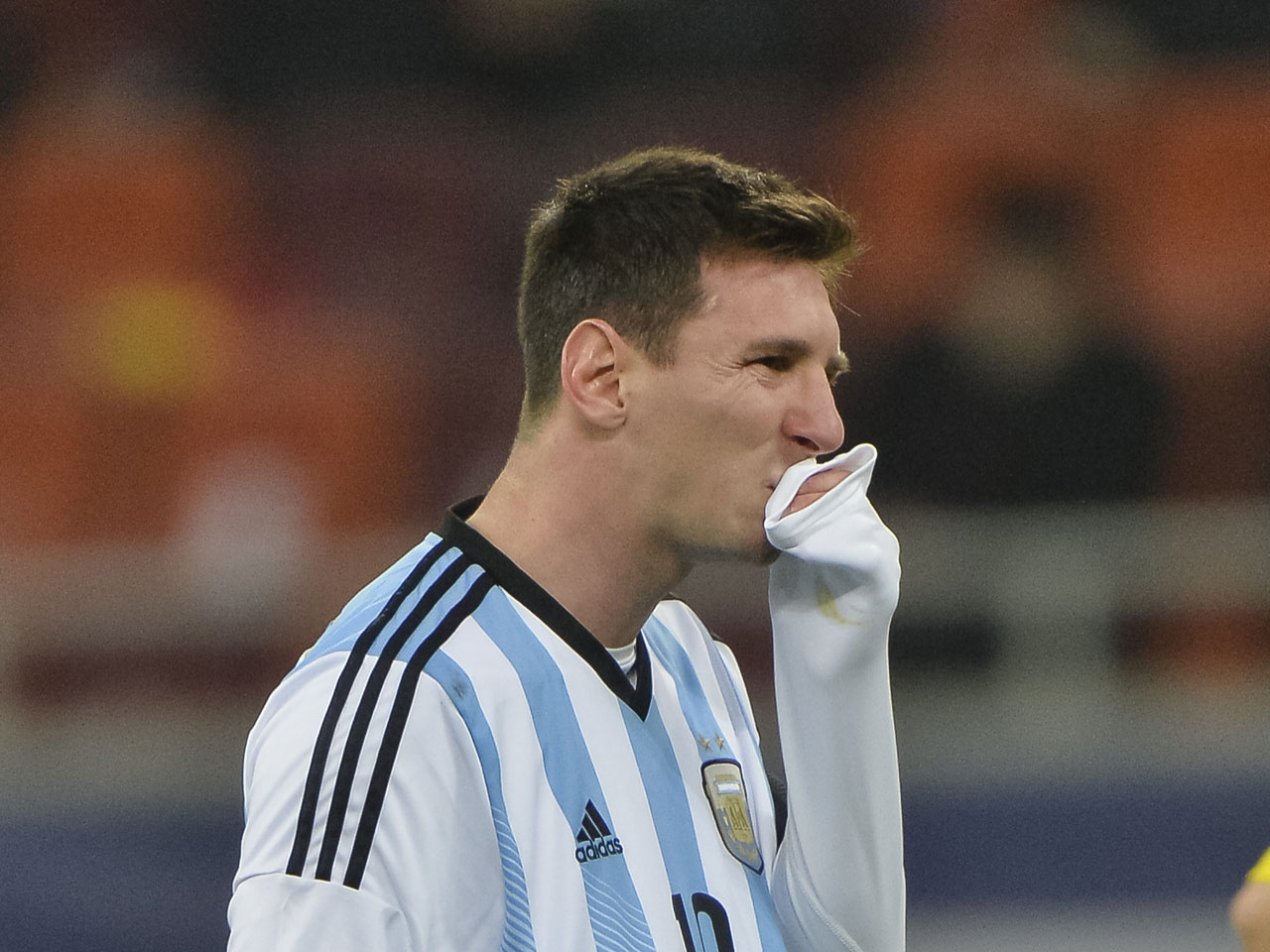 BELO HORIZONTE, Brazil - Shortly after coming on as a second-half sub in Argentina's last World Cup warm-up, Lionel Messi doubled over and appeared to vomit on the pitch.

He's done it at least a half-dozen times with Argentina and club team Barcelona, mystifying doctors and fans alike.

"Nerves," says Argentina coach Alejandro Sabella, and that's a diagnosis as good as any.

The Argentina captain and four-time world player of the year is under tremendous pressure to lead the Albiceleste to its first World Cup trophy since 1986.

"I reckon that in these moments there is anxiety more than anything," Sabella said before the team departed for Brazil, where it opens its World Cup campaign against Bosnia-Herzegovina on Sunday. "It's difficult to remain calm."

Top athletes throwing up before, during or after a competition is not unusual. Sometimes it's because of the physical stress on their bodies, sometimes because of performance anxiety.

What's unusual about Messi is that it seems to happen quite randomly, not when the pressure would seem the greatest or when he's exhausted himself to the limit.

After Messi threw up less than 10 minutes into a friendly match between Argentina and Romania in March, his coach at Barcelona, Gerardo Martino, said "something is not right," though he added that it wasn't affecting Messi's play.

Messi made that point clear against Slovenia on Saturday, scoring Argentina's second goal just four minutes after TV cameras showed him dry-heaving and receiving a tablet from the bench.

Similarly, in 2011, he scored for Barcelona after throwing up in the Spanish Super Cup Final against Real Madrid.

Barcelona's medical staff hasn't been able to find the cause. Neither have Argentina's team doctors, nor Messi himself. The decorated forward tends to not make a big deal of it, saying it's just something that happens to him in training, during matches and even when he's at home.

"I don't know what it is. But I had a thousand exams," Messi told Argentine broadcaster TyC Sports earlier this year. "I start to feel nauseous to the point where I almost vomit, and then it goes away."

In those decisive moments that make or break a football career, Messi doesn't show any nerves or lack of confidence. His more than 350 goals for Barcelona, a club record, and 48 goals for Argentina speak for themselves.

But unlike some of the sport's other bright stars, like Portuguese football diva Cristiano Ronaldo or Swedish tough guy Zlatan Ibrahimovic, Messi doesn't act like a superstar off the pitch.

He is a gentle, unassuming person who once told Spanish newspaper El Pais "I'm more concerned with being a good person than being the best footballer in the world."

Still, the pressure on him to be the latter is huge. Even though he's just 26, his impressive record with Barcelona, including six Spanish league and three Champions league titles, has already brought comparisons with all-time greats like Pele and Diego Maradona. His detractors like to point out, though, that unlike those two, Messi has not won a World Cup. He's only scored one goal and never gotten past the quarterfinals in his two attempts on football's biggest stage.

Argentina counts on Messi to do a lot better in Brazil, where the team is considered one of the title favorites much because of him.

Adding to the pressure is the view among many Argentines that Messi, who left the country at 13, doesn't play his heart out for the national team.

"Argentina is my country, my family, my way of expressing myself," he recently told Spanish sports paper Marca. "I would change all my record to make the people in my country happy."