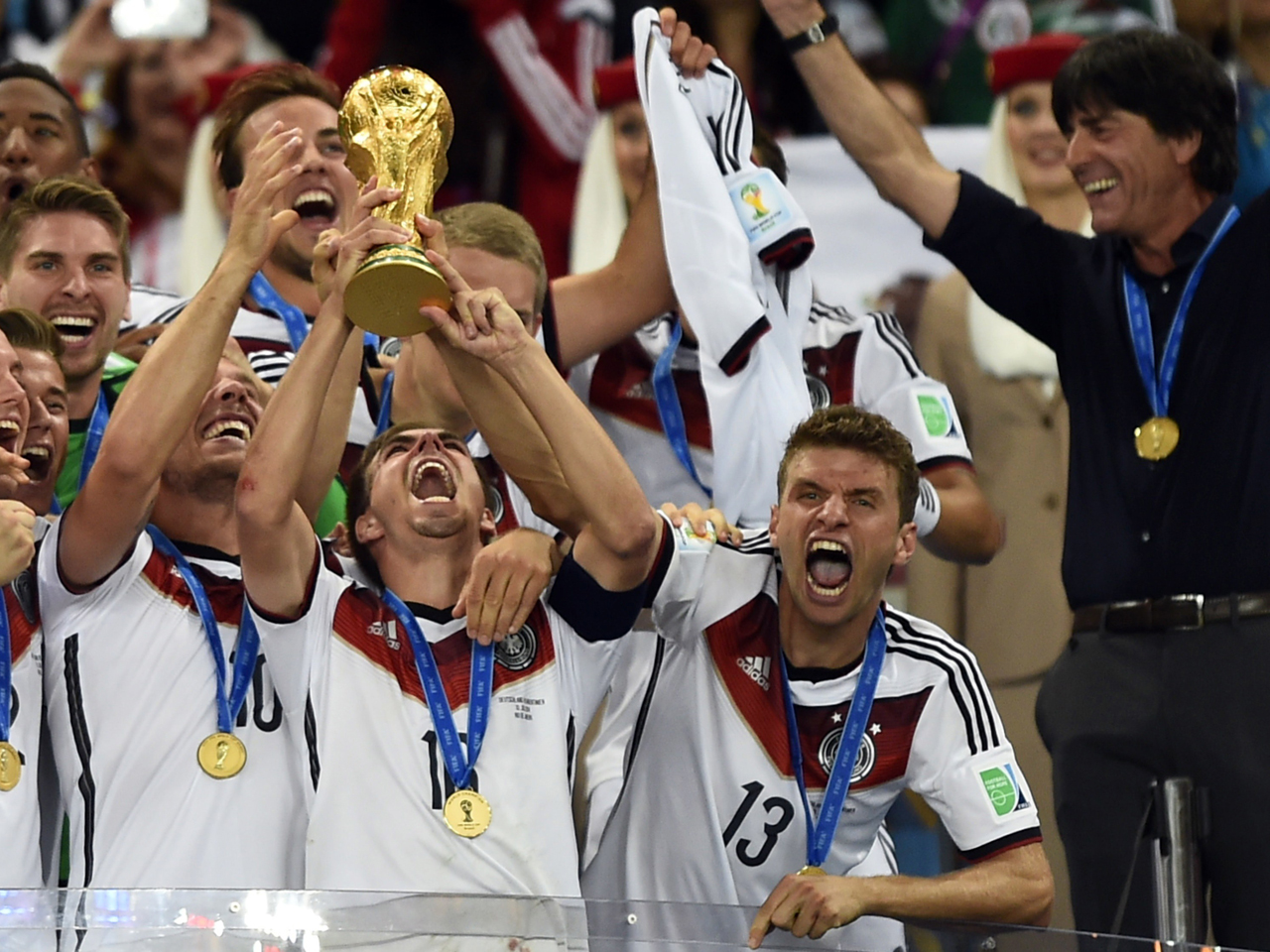 Goetze scored the winning goal in extra time to give Germany a 1-0 victory over Argentina on Sunday in a tight and tense World Cup final that came down to one piece of individual skill.

Goetze, who wasn't born when West Germany beat Argentina in the 1990 final, controlled a cross with his chest in the 113th minute and in one fluid motion volleyed the ball past goalkeeper Sergio Romero and inside the far post.

It was a goal that gave Germany its fourth World Cup title in its eighth final, and left Argentina star Lionel Messi still walking in the shadow of his compatriot Diego Maradona, who led his country to the 1986 title.

"In the end," writes CBSSports.com's Evan Hilbert, "Messi couldn't do it all for Argentina, and Germany had just enough."

Goetze had come on as a substitute for Miroslav Klose toward the end of regulation time and the 22-year-old midfielder's fresh legs made the difference.

Andre Schuerrle broke down the left flank, sending his cross into the area, and the Bayern Munich player did the rest with a clinical finish. The goal echoed that of Andres Iniesta's four years ago, when the midfielder scored in similar fashion but from the other side of the area to give Spain a 1-0 extra time win over the Netherlands.

It was, Hilbert points out, the first goal allowed by Argentina in some seven hours of game time.

For Germany, the win ends a string of near misses since winning its last major title at the 1996 European Championship. The team lost the 2002 World Cup final to Brazil and lost in the semifinals in both 2006 and 2010.

It is Germany's first World Cup title as a unified nation, having won as West Germany in 1954, 1974 and 1990. It was also the third World Cup final between these countries and had been billed as a matchup between the perfect team and the perfect individual, pitting Germany's machine-like unit against the brilliance of Messi, the four-time world player of the year.

But in the biggest game of his career, Messi came up short.

He had one good chance to score when he was sent free in the area just after the halftime break, but sent his shot wide of the far post. It was a difficult angle, but still the type of chance he so often converts for Barcelona.

Messi threatened intermittently throughout the match, but was effectively neutralized for long stretches. When he did try to break forward with one of his quick dribbles, he was surrounded by the German defense.

His free kick in the 120th minute went well high.

When the final whistle blew, Germany players collapsed in a pile in the middle of the pitch, while Messi walked with his hands on his hips toward the center circle.

Messi, who scored four goals in the group stage but none in the knockout rounds, then had to trudge alone up the stairs of the Maracana Stadium to accept the Golden Ball award for the tournament's best player, shaking hands with German Chancellor Angela Merkel along the way. He never broke a smile. Germany goalkeeper Manuel Neuer was voted best goalkeeper of the tournament.

Up until Goetze's winning goal, the game was more notable for top-class defending than creative attacking, but both teams had their share of chances.

In fact, the first half had just about everything but a goal.

Gonzalo Higuain was gifted a free chance when Toni Kroos' back header landed at his feet and left him all alone with Neuer. However, he sent his shot woefully wide.

Higuain thought he had scored in the 30th after Messi picked out Ezequiel Lavezzi with a great ball and he sent a cross in toward the Napoli striker. Higuain slotted in his finish inside the far post and ran all the way to the corner flag in celebration before realizing he had been called for offside.

Shortly afterward, Germany was forced to use a substitution as Christoph Kramer had to go off with a suspected concussion after colliding with Ezequiel Garay's shoulder earlier in the game. Kramer had continued playing but looked visibly dizzy as he was led off the field. Kramer, who was a late inclusion in the lineup after Sami Khedira was injured during the warmup, was replaced by Schuerrle.

Germany's best chance came just before the break when Benedikt Hoewedes hit the post with a header from a corner.

The game grew more cagey in the second half as both teams became increasingly cautious, knowing that a single mistake could make the difference.

In extra time, both teams had chances to score early. Schuerrle controlled a ball in the area just after the restart and fired a hard shot that Romero had to react quickly to push out.

In the 97th, Palacacio controlled a cross on his chest and tried to lob Neuer, but the ball drifted wide of the post.