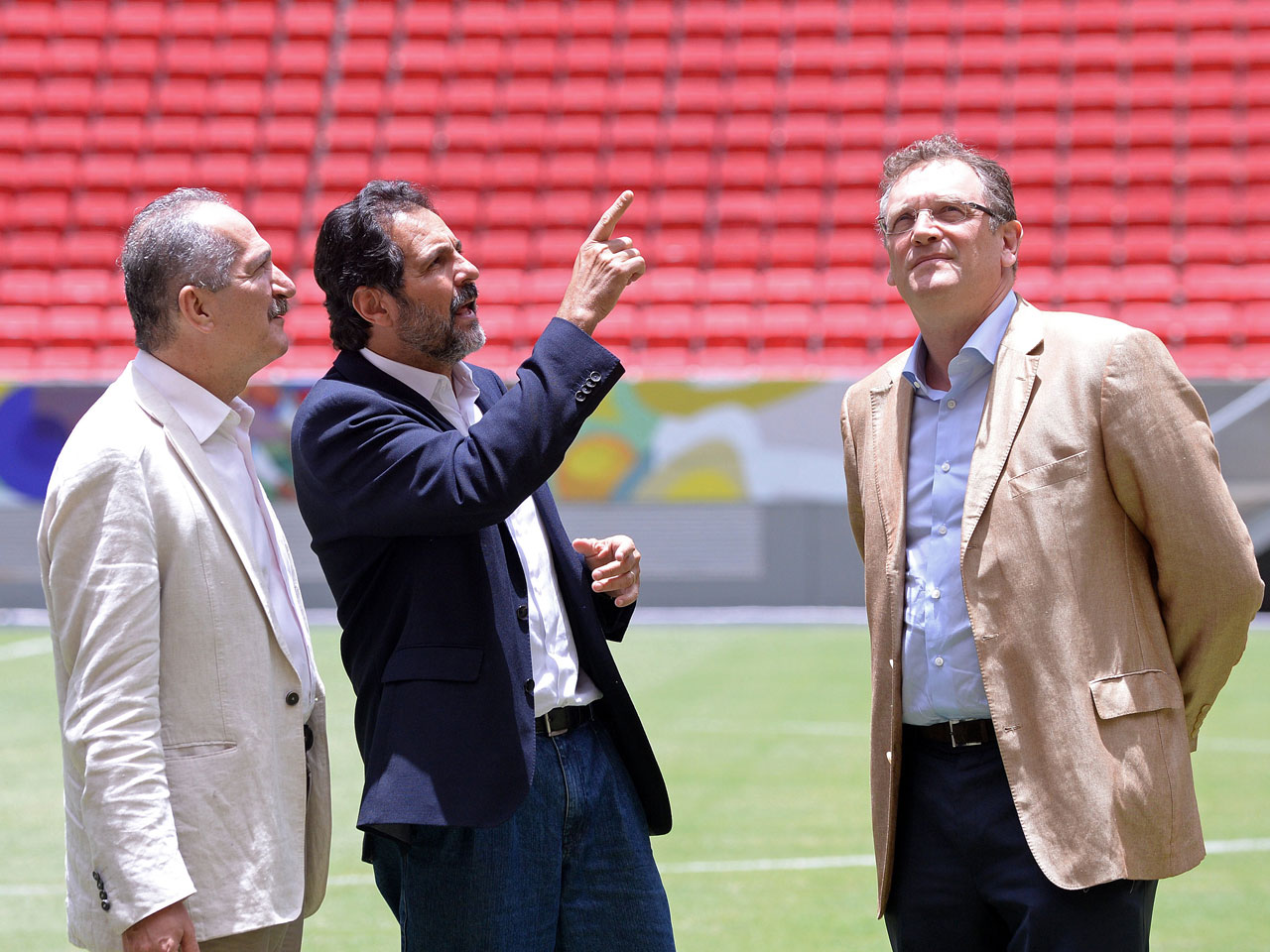 BRASILIA, Brazil - The cost of building Brasilia's World Cup stadium has nearly tripled to $900 million in public funds, largely due to allegedly fraudulent billing, government auditors say. The spike in costs has made it the world's second-most expensive soccer arena, even though the city has no major professional team.

Now, an Associated Press analysis of data from Brazil's top electoral court shows skyrocketing campaign contributions by the very companies involved in the most Cup projects. The lead builder of Brasilia's stadium increased its political donations 500-fold in the most recent election.

The financial links between construction firms and politicians add to deep suspicions among Brazilians that preparations for soccer's premier event beginning next month are tainted by corruption, raising questions about how politicians who benefit from construction firms' largesse can be effective watchdogs over billion-dollar World Cup contracts. Anger over perceived corruption helped fuel huge protests last year, and there are fears more unrest could mar the Cup.

"These donations are making corruption in this country even worse and making it increasingly difficult to fight," said Renato Rainha, an arbiter at Brasilia's Audit Court, which is investigating the spending on Brasilia's stadium. "These politicians are working for those who financed campaigns."

In a 140-page report on the stadium, the auditors found $275 million in alleged price-gouging - and they have only examined three-fourths of the project. They forecast that fully one-third of the stadium's cost may be attributable to overpricing, the largest single chunk of $500 million in suspect spending auditors have flagged in World Cup construction projects so far. And this doesn't even address the eight workers that have been killed in constructing the country's World Cup stadiums so far.

Federal prosecutors say as yet no individuals or companies face corruption charges related to World Cup work, but it could take years for official audits to be finalized and judged by civil courts, a required step before any criminal charges are filed. There are at least a dozen separate federal investigations into World Cup spending.

"Is there corruption in the Cup? Of course, without a doubt," said Gil Castelo Branco, founder of the watchdog group Open Accounts that campaigns for transparency in government spending. "Corruption goes where the money is, and in Brazil today, the big money is tied up in the Cup."

The price of building or refurbishing the 12 arenas alone has nearly quadrupled from initial estimates, helping make Brazil's World Cup the priciest yet.

Funding for Brasilia's stadium relies solely on financing from the federal district's coffers, meaning every cent comes from taxpayers. The auditors' report found instances of what appears to be flagrant overpricing.

For instance, the auditor's report says transportation of prefabricated grandstands was supposed to cost just $4,700 - but the construction consortium billed the government $1.5 million. The consortium is made up of Andrade Gutierrez, a construction conglomerate, and Via Engenharia, an engineering firm.

The audit questions why the consortium had to discard 12 percent of its steel in Brasilia when Andrade Gutierrez, using the same cutting methods, lost just 5 percent of steel at another stadium it helped build in the Amazon city of Manaus and virtually none at a Cup arena in Cuiaba.

Another $16 million was lost when Brasilia's government inexplicably failed to enforce a fine against Andrade Gutierrez for a five-month delay in completion of the main portion of the stadium.

Auditors also say they spotted $2.3 million worth of materials that were simply listed multiple times on bills.

Andrade Gutierrez did not respond to an AP request for comment on the accusations of cost overruns.

But Claudio Monteiro, the head of the government's World Cup committee in Brasilia that is responsible for oversight, said the audit court's allegations are simply wrong and that all spending on the Brasilia stadium would be justified.

He questioned why the report came out so close to the opening of the tournament. "That's why I say they're trying to spoil the party," Monteiro said from his office outside the stadium. "We're going to show how this report is off base."

Monteiro is the former chief of staff to Brasilia's Gov. Agnelo Queiroz, a position he was forced to leave in April 2012 amid accusations he was part of a widespread kickback scheme. That scandal also forced him to give up his seat on the World Cup committee, but no charges were filed and he returned to the post a few months later.

Sports Minister Aldo Rebelo, a member of the Communist Party of Brazil, defended the legacy the Cup will leave behind for average Brazilians and said anybody responsible for misspent public funds would be found out.

"No disservice will be done to the people because of this Cup," Rebelo said in a recent interview at his office, adorned with busts of Mao Zedong, Karl Marx and Abraham Lincoln. "If any corruption is proven, it will go through our legal system and punishments will be handed out for anyone found responsible."

In a poll last year, three-fourths of respondents said the World Cup construction has been infused with corruption.

Such beliefs fueled widespread and often violent anti-government protests last June that sent more than a million Brazilians into the street during FIFA's Confederations Cup soccer tournament, the warm-up event to the World Cup. Many protesters railed against corruption and the billions spent to host the events.

The distrust isn't surprising in a nation where 40 percent of federal congressmen have criminal cases pending against them before the country's highest court, according to the watchdog group Focus on Congress, bolstering concerns the rise in campaign contributions found by the AP likely influenced government spending on the Cup.

The overall price of the 12 stadiums has jumped to $4.2 billion in nominal terms, nearly four times the estimate in a 2007 FIFA document published just days before Brazil was awarded the tournament. At the time, leaders also promised the stadiums would be privately funded.

Critics say four of the stadiums will become white elephants after the tournament because they are in cities that cannot support them,

"There's collusion of the Brazilian governmental elite with the business elite, and the game is rigged in their favor," said Christopher Gaffney, a professor at Rio's Federal University whose research focuses on the country's preparations for the World Cup and 2016 Olympics. "This was an opportunity to make a lot of money and that's what's happened."

Andrade Gutierrez, which was awarded stakes in contracts totaling nearly one-fourth of the Cup's total price tag, contributed $73,180 in 2008 municipal elections. Four years later, after it was known which cities were hosting Cup matches and thus which political parties controlled the local governments that awarded and are overseeing Cup projects, the company's political contributions totaled $37.1 million.

It was in 2010, in between those two elections, that Andrade Gutierrez won bids to build or renovate four stadiums.

The political contributions of Brazil's top builder, Odebrecht, also had a 127-fold increase between those two elections - from $90,909 in 2008 to $11.6 million in 2012. It also won four stadium contracts worth billions along with a much-criticized contract to operate Rio de Janeiro's Maracana stadium for 35 years.

Rio state prosecutors have asked a court to force the renegotiation of the contract. They accuse the government of handing a sweetheart deal to the Odebrecht consortium, which also includes the firms IMX of Brazil tycoon Eike Batista and Los Angeles-based entertainment giant AEG.

The consortium will pay the government about $2 million a year, but prosecutors point out that doesn't even cover the $13.5 million a year the state must pay to service its 15-year loan to build the stadium.

In emailed statements, both Andrade Gutierrez and Odebrecht noted that their donations were legal under Brazilian law. They didn't respond to questions about why their contributions had spiked so markedly in recent elections.

The donations are virtually impossible to link directly to candidates.

That's because nearly all the money was given to national parties and thrown into a single pot for them to distribute, obscuring ties between corporations and specific politicians.

In March, Brazil's top electoral court mandated that money given by national party committees to candidates must indicate who originally gave the money to the committee.

And more changes are coming.

A majority of justices on the country's Supreme Court voted last month to ban future corporate political donations, citing corruption fears. A single justice demanded to delay a final vote, meaning the reform won't take effect for months, after the Cup is over.

Corporate money in elections raises red flags in many nations, but it is especially serious in Brazil because the vast majority of campaigns are funded by corporations.

In the last presidential elections, more than 98 percent of campaign funds for both President Dilma Rousseff and her challenger Jose Serra came from big business, according to Transparency International's Brazil branch.

Bent Flyvbjerg, a professor at Oxford's Said Business School and one of the globe's foremost experts on global sports events, said that when countries opt to host them they're "basically writing a blank check."

"Often people are late on these projects and the only thing they can do is throw money at them," Flyvbjerg said. "It's the only way to get them done."

Construction companies know the events must be held on specific dates, which gives them leverage. The closer they get to that date and the more behind schedule preparations are, the more revenue they'll make - and FIFA says it's not seen any nation in the last four decades that's been further behind on Cup preparations than Brazil. As Brazil also prepares to host the 2016 Olympics, the IOC has said the same thing.

Political pressure makes it worse. Few nations have portrayed the World Cup in a more transformative light than Brazil.

In 2010, former President Luiz Inacio Lula da Silva met with officials from the 12 host cities, who promised to deliver ambitious works to fix Brazil's woeful public transportation system. Silva told those gathered that they weren't just making a commitment, but "signing a treaty before the Brazilian people that we'll not only host the World Cup, but the best World Cup."

With charges about misspent money flying, and few public transportation works in sight, many feel the nation blew its chance to make real advances.

Outside the stadium in Brasilia, security guard Paulo Rodrigues sought the shade of a jackfruit tree in the arena's parking lot on a recent afternoon. He smoked a cigarette down to the filter then used it to point up at the massive arena.

"That's a monument to national sadness and waste," he said. "I'm not against the Cup, but I'm frustrated with the spending and the corruption we all know it involves. When politicians build a road, even if there are kickbacks, at least at the end we have a road. With this stadium, we have nothing."