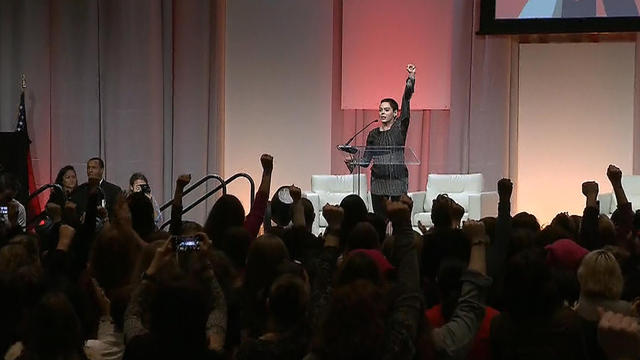 The Harvey Weinstein scandal was front and center at Friday's Women's Convention of women activists in Detroit. At the event, actress Rose McGowan spoke publicly for the first time since accusing Weinstein of rape.

Of the more than 50 alleged victims, McGowan was among the first prominent actresses to speak out following the explosive New York Times expose on Weinstein's behavior.

"I have been silenced for 20 years. I have been slut shamed, and you know what? I'm just like you," McGowan said in her speech during the opening session of the convention.

"The scarlet letter is theirs," she said. "It is not ours."

The convention grew out of the Women's March on Washington in January, reports CBS News correspondent Adriana Diaz. Organizers says they're bolstered by the wave of women stepping forward since the New York Times report over three weeks ago.

In 1997, Weinstein reportedly paid McGowan $100,000 in a settlement for an incident in a hotel room. Weinstein denies all accusations of non-consensual sex. McGowan appeared on a panel dedicated to helping survivors of sexual assault.

"Harvey Weinstein is like the linchpin pulled out of the grenade, and we're about to see the grenade," said actress Amber Tamblyn, who also spoke at the event. She said she was sexually assaulted by an ex.

"It's pretty pervasive and to be honest, there's been a lot of -- there's been a lot of criticism of people saying, 'Oh, they all knew' and it's really not true. Our business is cyclical and protective. Those things accumulate and they create an environment in which everything sort of sounds like hearsay," Tamblyn said.

Tamblyn says she hopes the movement against abuse resonates beyond Hollywood.

"It's time for everybody to start speaking and to talk about the policies that are being placed on women and for us to have ownership over our own bodies, our own rights, our own educations, everything," she said.