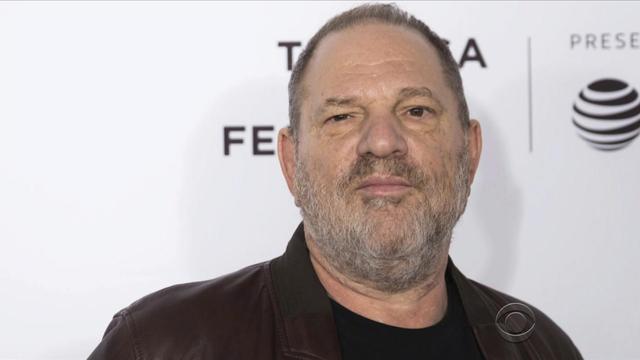 French President Emmanuel Macron says he is taking steps to strip Harvey Weinstein of his prestigious Legion of Honor medal.

This follows Weinstein's expulsion this weekend from Hollywood's Motion Picture Academy, the group that hands out the Oscars.

One of them is British soap opera star Lysette Anthony. She says Weinstein stalked and raped her. Anthony told CBS News correspondent Bianna Golodryga the alleged incident happened when she was a 24-year-old intern.

Anthony says Weinstein once showed up unannounced at her front door and pushed his way in.

"The truth is that Harvey Weinstein raped me in my own home," Anthony told the Sunday Times of London.

Paula Wachowiak says a 1980 meeting in Weinstein's hotel room left her shaken after he dropped his towel and asked her for a massage.

"When I got in and he closed the door, I noticed he had like a hand towel around his waist, which was all he had on," Wachowiak said. "He just came up to me and he said, 'So, was it the highlight of your internship to see me naked?' and I just looked at him and I said, 'No, Harvey, you disgust me.'"

Another British woman, a former Weinstein employee using the alias "Sarah Smith," alleges he raped her in his London office in 1992.

Weinstein, through a spokeswoman, "unequivocally denies allegations of non-consensual sex."

"To call him a predator, to call him a 'sick man,' it was jarring at first and then the emotion just kept coming," Belloni said.

"I have a brother that's indefensible and crazy," Bob Weinstein told Belloni. "I want him to get the justice that he deserves."

Bob Weinstein says he was shocked by the sex assault allegations. He wouldn't answer questions about what the Weinstein Company's board members actually knew. With accusations piling up, even Weinstein's own brother describes Harvey as being "sick and depraved."

"If it comes out that the board knew about his behavior and authorized settlements, that is a deal killer for anyone who's going to support this company in my opinion," Belloni said.

This weekend, a fifth board member reportedly stepped down, leaving The Weinstein Company with just three. Deals with Disney, Amazon and Lin-Manuel Miranda have already been scrapped or are in jeopardy.

Bob Weinstein says he expects his company to survive, but under a different name.