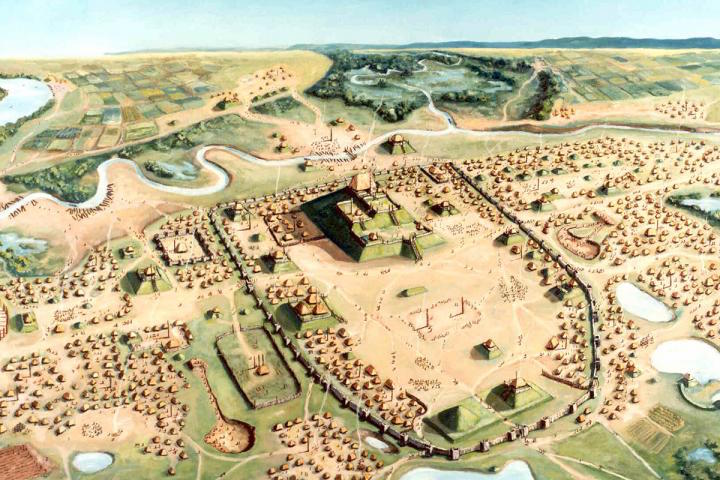 The remains of women and a child have been discovered at a burial mound at Cahokia, considered North America's first city, which previously was thought to hold only men, researchers say.

A closer look at a grave at Cahokia, located in Illinois near St. Louis, Missouri, has revealed that a blanket of beads is intertwined around a man and a woman of high status.

"In re-examining the beaded burial, we discovered that the central burial included females," study co-author Kristin Hedman, a physical anthropologist with the Illinois State Archaeological Survey (ISAS), said in a statement. "This was unexpected." [Cahokia to Area 51: The 10 Strangest Places on Earth]

Archaeologist Melvin Fowler, who died in 2008, discovered the enormous burial ground in 1967 during the excavation of an unusual mound with a ridgetop. The site, now called Mound 72, contained five mass graves, each holding 20 to more than 50 bodies. There were dozens of other bodies buried by themselves or in groups at the site, bringing the total count to 270, Fowler found.

Scientists dated the burials to between A.D. 1000 and A.D. 1200, during the rise and peak of Cahokia's power and influence, the researchers said. Some of the bodies were placed on cedar piles, indicating that they were high-status individuals, according to the researchers.

"Mound 72 burials are some of the most significant burials ever excavated in North America from this time period," said study co-author and ISAS Director Thomas Emerson.

Several analyses of the burials haven't held up, however. Mound 72 holds two central bodies that are placed top of each other. These bodies are separated and surrounded by a blanket of beads, and several other bodies from the same time period surround them.

Fowler and other archaeologists thought that these bodies were two high-status men who were surrounded by servants. Moreover, the beads look like a beaded cape or blanket that was originally shaped like a bird, they said.

The bird motif is usually related to warriors and supernatural beings in Native American cultures, so Fowler suggested that the two central males represented mythical warrior chiefs, the researchers said.

Once this interpretation was made public, many experts viewed Cahokia as "a male-dominated hierarchy," Emerson said.

When Emerson and his colleagues re-examined the evidence -- including the archaeologists' maps, notes and reports -- they came to a conclusion different from Fowler's. For instance, the early archaeologists said there were only six bodies associated with the beaded burial, but the new team found 12.

Moreover, a skeletal analysis revealed that the high-status pair weren't two men, but a man and a woman. The bodies near the power couple are also male-female pairs, and one individual was a child, the researchers said.

"The fact that these high-status burials included women changes the meaning of the beaded burial feature," Emerson said. "Now, we realize we don't have a system in which males are these dominant figures and females are playing bit parts. And so, what we have at Cahokia is very much a nobility. It's not a male nobility. It's males and females, and their relationships are very important." [The 7 Most Mysterious Archaeological Finds on Earth]

The new discoveries are consistent with other Cahokia findings, Emerson said.

"For me, having dug temples at Cahokia and analyzed a lot of that material, the symbolism is all about life renewal, fertility, agriculture," he said. "Most of the stone figurines found there are female. The symbols showing up on the pots have to do with water and the underworld. And so now, Mound 72 fits into a more consistent story with what we know about the rest of the symbolism and religion at Cahokia."

Not a warrior culture

It's unlikely that the beaded blanket symbolizes some type of warrior message, Emerson said. Instead, an analysis of the burial mound suggests that the Cahokia honored both men and women, he said.

"When the Spanish and the French came into the Southeast as early as the 1500s, they identified these kinds of societies in which both males and females have rank," he said. "Really, the division here is not gender; it's class."

"People who saw the warrior symbolism in the beaded burial were actually looking at societies hundreds of years later in the Southeast, where warrior symbolism dominated, and projecting it back to Cahokia and saying: 'Well, that's what this must be,'" Emerson said. "And we're saying, 'No, it's not.'"

The study was published in the July issue of the journal American Antiquity.