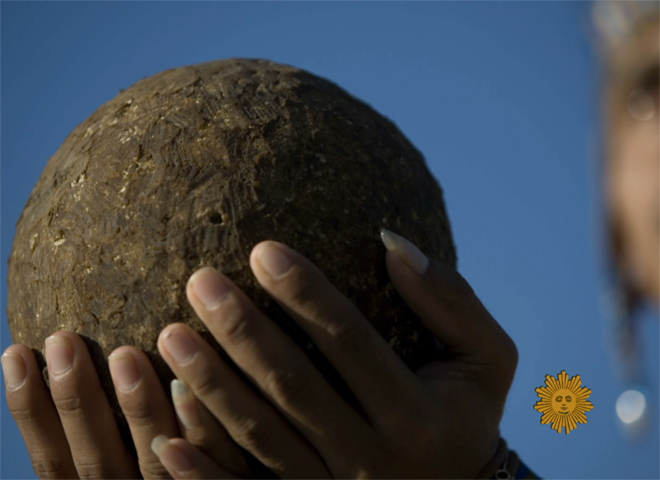 (CBS News) There is one constant this summer, something that has been a part of our lives almost since the day we were born: The simple pleasure of playing with a ball. It's something we probably never think about, so we went to someone who has given the ball a lot of thought - and frankly, Lee Cowan had a ball doing it!

As a Harvard-educated anthropologist, John Fox often wonders about stuff the rest of us just take for granted...

Which is why one day, when he was playing ball with his son Aidan, he had a moment that he couldn't shake.

"He stopped and kind of looked funny, and he said, 'Hey Dad, why do we play ball anyway?'" Fox recalls his son asking. "It was one of those questions where I could have said, 'Hey, you know, go ask your mother.'"

But instead, he chose to write a book.

"The Ball" (HarperCollins) was his 300-page answer to his son's question - what he calls the most kinetically interesting object on the planet.

"In its simplicity, the ball is just profoundly good for us, I think, as humans," Fox said. "There's a reason why it's universal."

The ball is the stuff dreams are made of - before we even know what dreams are.

My first was a fuzzy soccer ball of sorts. I'm told we were inseparable back then. I've never forgotten it.

From our first encounter with the ball, there seems to be a connection. John Doleva sees it every day at the Basketball Hall of Fame.

"I was just down on our center court here and I saw a father roll a ball to his son who was sitting there," Doleva said. "And he got the ball and he rolled it back. So immediately it's one of the first things you can do. You can sit there, the ball can be rolled to you and you can roll it back. It's kind of in our DNA."

But why would a plaything hold such a place in our heart? Maybe it's because it's not the heart a ball affects - it's our brain.

"There's science that's really starting to show that there's more to this," said Fox. "There's a real sort of intellectual benefit and emotional benefit and moral benefit, to playing."

Playing has been proven to improve both our cognitive and social skills. Take lab rats: Studies show those not allowed to play - grew up mentally slow, and socially awkward.

And when it comes to what to play WITH - even our deep sea, deep thinking cousin, the dolphin, choose a ball over anything else.

It's been around for thousands of years. The Pharaohs of ancient Egypt were early fans. They're depicted holding a ball in one hand and a stick in the other - one of the earliest sports pages, perhaps.

"There's indications in the art that by striking these balls he was trying to attack the serpent enemy of the Gods and it was to protect the world and protect the people," Fox said. "Pretty serious ball player!"

Heavenly in some cultures, but diabolical in others. It was the Mayans, using the rubber tree, who first gave a ball its bounce.

"When the Spanish arrived, they saw the Indians playing with this incredible object that was bouncing and ricocheted off walls," Fox said. "They thought it was possessed by demons. They'd never seen rubber before."

Indeed, it was a leather ball Europeans were used to - a pigskin. The first football games in medieval England were made up of villagers trying to bring a ball back to their home turf, and it often got out of hand.

"The game of football was banned by an English king nine times in the 14th century because it was so destructive to property and people's lives," Fox said. "People were trampled; windows were broken; it was just seen as a hazard."

That morphed into the American football, a more aerodynamic version, for easier throwing.

But the ball wasn't always easy to come by. Take the baseball. The early ones were homemade, of anything round that had just enough bounce.

"There's a story from the Midwest where they didn't have much rubber at that time, where they were making the core from sturgeon eyeballs, because I guess sturgeon were more plentiful than rubber in the Lakes region," Fox said.

Which is maybe why the two fastest-growing sports in the world don't require anything special like fish eyes. Both soccer and basketball need only the ball - and a target.

The soccer goal hasn't changed much, but the basketball hoop has. It started off as a peach basket without a hole. A Presbyterian minister named James Naismith first came up with the idea in Springfield, Mass., back in 1891.

The ball itself has come a long way since, and so has the game.

"There are more people in China that are in organized leagues, playing basketball, than there are citizens in the U.S.," said Doleva.

One of the first to be master of the basketball was the Celtics' Bob Cousy. "The Long Island Daily Press used to refer to me as the Houdini of the Hardwood," he told Cowan. "And a lot of fans used to say, 'God, you've got eyes in the back of your head!'"

He's now 83, and looking back, he says that ball took him places he never would have gone.

"It led to all sorts of things," Cousy said. "Been to every place imaginable. I've been invited to the White house by six sitting presidents, because of my relationship with the ball!"

Speaking of which, even the leader of the free world STILL plays with a ball - it relieves the weight of the office, he says.

Sometimes things really are as simple as they seem - and just as timeless.