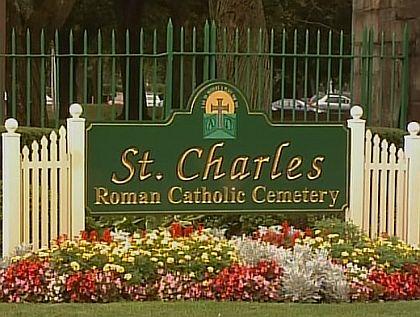 EAST FARMINGDALE, N.Y. (CBS/WCBS/AP) Police in New York are investigating a shocking crime: the theft of a woman's body from a mausoleum in a Catholic cemetery.

The break-in happened at St. Charles Cemetery on Long Island, east of New York City, between 6:30 p.m. Monday and 7:30 a.m. Tuesday, when a caretaker discovered the damage.

Three mausoleums were entered and a casket was removed from one, said Suffolk County Deputy Inspector Robert Brown. He added that while cemetery vandalism is a somewhat regular occurrence, he had only heard of a body being stolen "once or twice" in his 25-year career.

Authorities said they believe more than one person was involved in the incident. Police said the suspects hopped the fence to get into the cemetery, CBS affiliate WCBS reports.

Police said the perpetrators knew what they were doing.

"They came to the cemetery prepared," Suffolk County Deputy Inspector Robert Brown told WCBS. "They knew what they would face inside the crypt and what would have to be done to remove a casket and open it."

The suspects then likely had to carry the body over the cemetery fence to get away, authorities said.

The body was that of a female buried 12 years ago.

Cadaver dogs were deployed in the surrounding area in case the thieves decided to abandon the woman's remains.

The cemetery, which opened in 1914, is operated by the Roman Catholic Diocese of Brooklyn. It is bordered by Republic Airport to the west and a number of other large cemeteries to the east.

"It is incomprehensible that anyone would violate the sacred resting place of those that have passed from this world to eternal life," diocesan spokesman Monsignor Kieran E. Harrington said in a statement. He added that Bishop Nicholas DiMarzio has reached out to immediate family members of the woman to express his "profound sorrow and solidarity in this painful time."