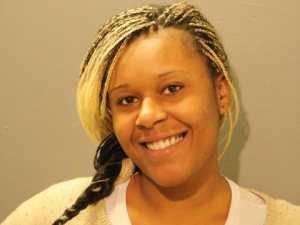 (CBS) CHICAGO - Jeanette Holt, a young mother from Harvey, Ill., is in trouble with police after lying about her baby being left in her car when it was stolen Wednesday morning on Chicago's South Side, CBS Chicago reports.

According to the station, police rushed to a Chatham neighborhood daycare center around 9:30 a.m. Wednesday after Holt called 911 to report her 1997 Chevy Monte Carlo had been stolen with her 1-year-old inside.

At least seven squad cars were put on alert to search the area, only to find out the child was not in the car to begin with. He had been in daycare the whole time, the station reports.

Police say the25-year-old Holt lied about the abduction because she wanted officers to find her car.

"The case was she dropped her baby off at daycare. Upon signing the child in, someone had jumped in her car, because she left her car running, and they drove off," Eltonjia Thompson, the owner of the daycare facility, told the station.

Police realized Holt was lying about an hour into the search and arrested her. She is charged with one count of felony disorderly conduct.

It's unclear if Holt's car was ever recovered.