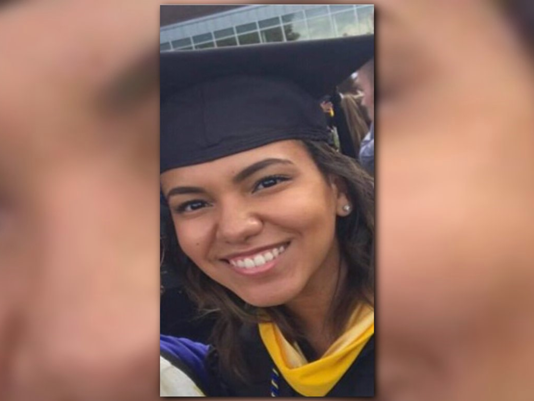 A 12-year-old boy's apparent suicide attempt on a northern Virginia interstate killed a woman who wanted to help troubled children like him, CBS affiliate WUSA-TV reports.

Marisa W. Harris of Olney, Maryland, died Saturday after the boy jumped from an overpass above Interstate 66 and fell onto the vehicle she was driving, incapacitating her, Virginia State Police said.

A front-seat passenger, who Harris' family identified to WUSA-TV as her boyfriend, wasn't hurt and steered the Ford Escape onto a shoulder.

Harris' mother told the station that she wanted to help kids like the boy, who was taken to a local hospital for treatment of life-threatening injuries. Harris was a first-year graduate student studying clinical mental health counseling at Marymount University in Virginia.

"Marisa was very quiet and reflective, but you could tell once she completed her program she was going to make a difference in the lives of a lot of young adults," counseling department Chair Lisa Jackson-Cherry said in a statement issued by the university. "Perhaps one of the largest impacts of this tragedy will be the loss of the positive impact that she would have had on others."

A recent graduate of the same program told WUSA-TV that the incident was a "cruel irony."

"So many people in our community are dedicated to helping teens in his very situation," Sarah Moore told the station. "It's just a tragedy for everyone around."

Moore, who graduated last year, said the program included an emphasis on the treatment of teenagers.