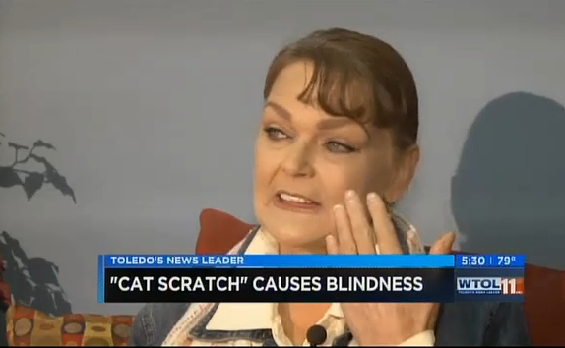 Many common bacteria harbored by house pets are harmless, but a few can cause serious illness, particularly for people who are already immune-compromised.

That appears to be what happened to Janese Walters of Toledo, Ohio. She told CBS affiliate WTOL she was left blind in one eye after she contracted an infection from her cat.

"I woke up one day and I couldn't see out of my left eye," said Walters. "I looked in the mirror and I thought I had pink eye or something."

After a month of inconclusive tests, doctors traced back the source of the infection to Walters' cat and a common bacteria known as Bartonella henselae, which causes a condition called "cat scratch" disease.

The rare infection can be passed from cats to humans through bites or scratches, but can also be transmitted through affectionate behaviors like licking.

"Anything that is exposed to the cat's mouth, including if you have a little scratch that the cat licks -- that's how you can get it," said Dr. Kristopher R. Brickman of University of Toledo's College of Medicine and Life Sciences.

The bacteria that causes cat scratch disease is found in the saliva and fur of about 40 percent of cats, especially kittens, transmitted through fleas and ticks living on the animals. Though it isn't harmful to cats, it can cause illness in humans, especially those whose immune systems are already weakened by other medical conditions.

The consequences of the infection are rarely as extreme as Walters'. She suffered a version of Parinaud's oculoglandular syndrome, which health officials say causes inflammation of the optic nerve and can lead to blindness.

"It can affect the eyes, because what it does is increases the proliferation of blood vessels in a certain area -- that creates problems called angiomas," Brickman said. "It can also cause some liver problems and can get into the spinal fluids and create meningitis."

Symptoms of cat scratch disease may include fever, muscle pain, a fluid-filled lesion at the site of the scratch or bite, and sore and enlarged lymph nodes that develop one to three weeks after exposure.

Walters says she had no knowledge of cat scratch disease before doctors diagnosed her. She says her doctors don't think they can reverse the blindness.

"I'm just lucky it didn't transfer to my other eye," Walters said.

To reduce the risk, the Centers for Disease Control and Prevention says to avoid stray cats and kittens, keep fleas and ticks under control, and limit rough play with cats to minimize exposure to bartonella henselae and other bacteria that can be passed from cats to humans. People who are immune compromised should also avoid owning kittens less than one year old.

"Basically, go play with your cats, but wash your hands afterwards," Brickman said. "Don't let them lick any open wounds -- and try to avoid getting bit by any cat."