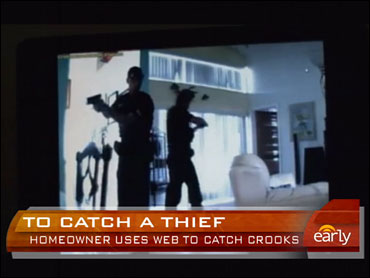 Imagine using your computer at work and seeing someone rob your home. That's what happened to a Florida woman this week when she happened to check the web camera that gave her a live picture of what was going on in her home.

Jeanne Thomas called 911 and was able to get the police there to apprehend the thieves, she told Early Show correspondent Harry Smith on Friday morning.

Thomas' house had been broken before, so she installed a webcam so she could keep an eye on her home. But after not checking it for three months, she decided to take a look that day.

"All of a sudden I had a strange feeling something was going on at the house. A sixth sense was happening," she said, but she didn't immediately think it was thieves.

"I thought my dogs were maybe doing something they shouldn't have been doing."

But it wasn't her dogs that were making mischief. It was two men, looking around the house and going through her belongings.

When Smith asked if she was freaked out by what she saw, she responded, "Completely. I was shaking."

She then called 911, having to be transferred three times before reaching the correct police department. But once she got in touch with the right people, they responded immediately, went to her home and arrested the men.

"They were there within the first three, four minutes," she said. "They then had the house completely surrounded. Evidently, according to my neighbors, they had 18 police cars, they had the SWAT team, you would have thought that the federal reserve was under siege."

The camera, Thomas went on, was a good investment. She said hers cost $250, was easy to set up and up to 4 cameras can be added onto one system.

The funniest part of the whole ordeal, she added, was when the burglars realized they were surrounded.

"They were trying to figure out how to get out of the house," she told Smith. "They were trapped."